I have a bunny that I adopted in July, I made him a hay rack just like the one I have for my lop. My lop I got as a baby and he has had no issues with his hay rack. I had no issues with my new rabbit eating out of his hay rack either. However, he started trying to take it off of the cage itself and started throwing it around until all his hay came out. The other behavior change that also started is him digging his entire litter box out. I'm not sure how his previous living arrangements were but I'm not sure if I should just give up on the hay rack and leave it either on the floor or in his litter box. I'm just wasting so much hay, and not to mention its much more difficult to monitor how much hay he is actually eating. He did fine for 3 months and this behavior started about 2 weeks ago primarily after neutering him.

Couple thoughts... one is that it can take up to 6 (or 8) weeks after neuter surgery for a rabbit's hormones to fully dissipate. During that time, his behavior can fluctuate. So he may settle down after a few more weeks.

Second, if it isn't all hormones, then he could just be a particularly active and adventurous bunny. Taking the hay rack down doesn't mean he hates it but that it is something to do. He discovered he can, so he does. Digging is another sign that he likes to be busy.

There are a few things you can do. Providing him with a dig box is one idea. You can google ideas for how to make one.

A picture of your hay rack might be helpful, but you may be able to ziptie it in place so that it cannot be removed by bunny.

Alternatively, you could just start giving him hay directly in his litter box. This may very well have the added benefit of preventing the digging (particularly if he is provided with a separate digging box). I offer hay only in the litter box for my rabbits. I refresh the hay twice per day. I'll attach a photo of a fresh litter box and what it ends up looking like after a week (with one rabbit). The uneaten hay gets tamped down and fresh hay is put on top which keeps the smell completely contained. (I use wood pellets for litter -- best I've found for odor absorption.) And as you can see, I can go a full week between litter box cleanings without any odor. Being generous with the hay is key.

You may want to consider getting your hay in bulk (by the bale or half-bale) if wasting it is a concern. It is just so incredibly cheap by the bale that you'll not give a second thought to any waste.

Once the 8 weeks post neuter have passed, and if the above suggestions still don't stop him from digging his litter box, you could resort to putting a grate over top of the litter inside the box. That seems to do the trick for some rabbit owners. I, myself, wouldn't like have to clean off all the squares of the grid -- too much hassle for me. 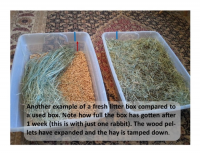 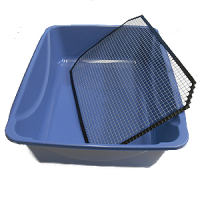