Thoughts on my Netherland Dwarf’s conformation?

We can't tell anything about his body if he's not posed. Try doing it on a table, not on the floor, so he can't run away (put a carpet square or rug onto the table). It's also helpful to get a picture from the front

I like the shape and size of his ears. He has nice size to his head and big jaws, but imo I'd like more brow on him to balance with those jaws. His head is also a bit long overall (which makes his eyes look small and less bold by comparison). I can't tell too much about the width of the head or carriage of the ears from only a side shot. Looks to have okay color (my main fault would be that his eye bands aren't very distinct.) I can't tell you about his fur without feeling it, but just from the picture it looks very out of condition, like he was halfway through a molt. Overall, not bad, especially for a first show dwarf.

This is my favorite dwarf I've owned, and you can see the upright pose you want on him. His head is not as large and developed as your buck's, but he was younger in this picture than your buck is right now and it can take a couple years for the heads to develop fully. 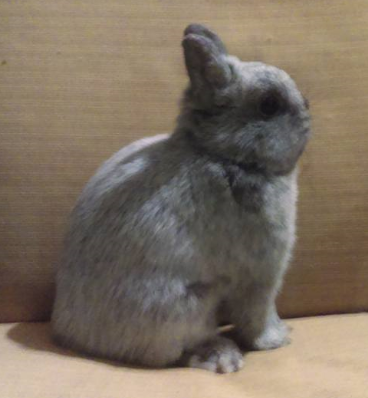