Out of my depth! Kit not getting enough milk

Hi all, firstly I hope I'm posting this in the correct thread. But my doe gave birth to 2 babies 5 days ago, it was an accidental pregnancy and I'm very out of my depth and so unprepared. I've been checking in on them a couple times a day cause I am very anxious it feels like they're my own kids haha! I'm concerned that one of them isn't being fed as much as the other or even at all, I have witnessed the mother feeding them on the second day so I'm under the assumption she is tending to them and based on the other baby being bigger I think she is producing milk. The one I believe isn't getting milk does seem okay and very responsive and moves a lot it's just the size and the belly seems wrinkly. Any chance anyone with more knowledge than me could help? I've even bought a camera monitor to set up so I can physically see if she is continuing to feed them.

Hi, this thread should be posted in Rabbitry forum but I think Moderators will move it there for you I've just reported now. It would be nice if they could change the title of the thread so it would describe your issue.

If the second baby wrinkled and the first is always full, you can remove the first fat baby from the nest for like 24 hours, keeping somewhere in a warm and safe place for that time, like just make another nest box for him with some of their nest hay and fur. During that time she will nurse only one and you will see if the second gets fat belly or still wrinkled. If he/she still not fat there must be some other problem, but it is often happens that the stronger kit pushes weaker down during nursing so weaker kits not getting enough milk.

If this works you can remove the fat one every other feeding and when the second one gets stronger they can stay together all the time. As you say they are 5 days by now so if the second one survived all this time it means he gets milk but maybe less than the first one, or you can be right and the first one is just bigger, this also happens when it's mixed breed rabbits, kits can be different sizes.

Please keep us informed on how it goes, good luck

I wouldn't recommend removing the fat baby, as with only two kits, mom should have plenty of milk to go around. I would try and hold the wrinkled kit up under her belly(carefully so it doesn't get kicked by the doe) while the doe is either being held gently but securely or while she is distracted.

You could try now or you may have to time it so it's not after she just nursed, but closer to the time when she's ready to nurse so her milk is full. You will likely have to hold the baby there for a while though, like maybe even up to 20 minutes. Sometimes trying to feed them off schedule the baby takes longer to fill up. You can tell by watching for the white patch on the kits belly to indicate the stomach is full of milk.

Though with there only being two kits, she should have plenty of milk to go around. So either her milk hasn't fully come in, she's not producing enough, or there could be a medical issue with the baby. Aside from trying to get the baby in for supplemental feeds, about all you can do is make sure the doe has lots of food and keep an eye on the baby.

Nursing does need lots of extra food themselves, to keep those babies supplied with milk. So free fed grass hay(eating at least a pile the size of her body per day, and continuing to produce healthy poops), some alfalfa if you want, and unlimited or close to unlimited of pellets, then whatever veg/greens you normally feed. If she is on a low protein grass based pellet, you will need to start to gradually transition her to a higher protein alfalfa based junior pellet, and in the meantime I would start supplementing with alfalfa hay until that transition is made and she is getting close to unlimited junior pellets. Alfalfa and junior pellets are higher in protein and calcium, which is what a nursing doe needs.

Here's a guide on taking care of mom and an accidental litter.

Do you have a picture of them?
C

SableSteel said:
Do you have a picture of them?
Click to expand...

This is the pic I took this morning when I checked them, the tan one is the smaller one I'm just unsure about whether it's a healthy small or not due to me not having any knowledge. I think I'm extra anxious as I know how easy it is to loose kits. 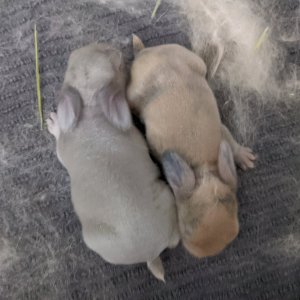 ChelseaL said:
This is the pic I took this morning when I checked them, the tan one is the smaller one I'm just unsure about whether it's a healthy small or not due to me not having any knowledge. I think I'm extra anxious as I know how easy it is to loose kits. View attachment 53691
Click to expand...

I was going to ask for a pic myself, honestly they both look fine to me and I don't think you have to worry he definitely gets milk. Is his belly wrinkled, if you could get a pic of it, but from what I see he is fine.
C

zuppa said:
I was going to ask for a pic myself, honestly they both look fine to me and I don't think you have to worry he definitely gets milk. Is his belly wrinkled, if you could get a pic of it, but from what I see he is fine.
Click to expand...

I'm sure I am worrying over nothing I just needed that second opinion of people that knew what they were looking at aha. This is one I took this morning, it's not the best picture he was super wriggly! The belly does seem a little less wrinkled than the other day so fingers crossed this little one has just finally caught up naturally. 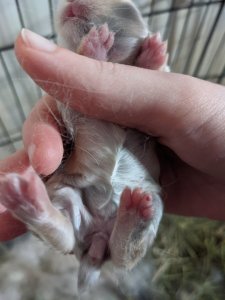