Need advice on which bunny for a bond? & trio questions?

Hello, I have a holland lop spayed female named Runa. She's going to be a yr old in July & I'm in the market for a bond friend for her but now I have a dilemma..

My bunny Runa is generally pretty easy going, she often seems to not care about anything, she's pretty active & very mischievous, does NOT listen to any form of discipline (lol), & she's gotten along with other bunnies for the most part, although she has gotten into a few scuffles with them when she's met others & I feel like she'd want to be the dominant bunny. She also recently met another yr old bunny who was used for breeding. I wanted to see if they would get along; since all he knows is to breed, he was mounting her quite a bit trying to mate & surprisingly she wasn't really getting mad at all. They did well for the most part, had 2 scuffles that we had to intervene on, but they calmed down quickly.

I accidentally fell in love with 2 baby bunnies. One of them (current nickname is Truman) I was immediately drawn to based off it's coloring, he's a Sable Frosty holland lop & looks like a little teddy bear. He's still pretty young, 5 weeks, so I can't bring him home just yet. His current personality is a lot like Runa's. He likes to keep very busy & wants to be the first one to eat. The breeder said he displays a little bit of a dominant personality but not in a way that he's mean to the other bunnies. Of course they are still babies & their personalities can still change. But I've heard 2 dominant bunnies can still bond, they just need to figure out the pecking order.

The 2nd bunny...visually speaking, he's definitely cute as well but I did originally overlook him. His nickname is Keanu, & he was a foster bun. Apparently was the smallest baby in his litter & was being given medication daily to help him out. They thought he wasn't going to make it but he did. He's 1 week older than Truman but is basically the same size. She said he's a balance of playful & calm, & he tends to be the last one to get food; he lets everyone else have their turn first.

Technically I ended up putting a deposit on Keanu because I was feeling like his personality would match better with Runa. But I did wake up that morning expecting to put my deposit on Truman, & now ever since putting the deposit on Keanu, I've been wondering if I made the right choice.
I also one time had a small parrot who was SO very dear to me, & I just discovered last night that Truman was born on the anniversary of my parrot's passing which sort of adds to the draw to Truman. (not that I want to pick one because of a date, but it is an important date to me)

So, I'm at a loss of what to do. I can switch my deposit if I want to, but do you guys think Keanu is the better pick for Runa? I did sort of just get the "ok" from my fiance that I can adopt both if I *really* want to, but I've never done a trio before, I hear it's pretty difficult. Is a trio easier if none of them are bonded just yet at all? 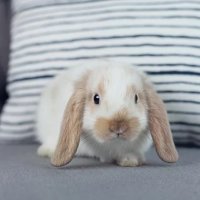 They will all need to live seperately until at least a month after they are ALL spayed and neutered.

Personalities can change when bunnies mature so honestly those personalities you see now at 5/6weeks old mean absolutely nothing.

Runa may never bond with another bunny if she is constantly getting into scuffles with ones she meets. Especially if they are scuffles not in her territory.

You would be picking a 2nd bunny for yourself. Not Runa. As there is always a chance she will want nothing to do with whoever you pick 6+ months down the road when you introduce them properly after his hormones have gone (no you should not be doing it before hes neutered!)

You would be better off finding an already neutered rescue male rabbit and doing some bunny dating through a rescue.

Really, getting a baby rabbit as a potential bond for your existing rabbit is a real risk. You have to be totally OK if they decide not to bond and you end up having to house both separately for the next 10 years. As Watermelons stated, you'd be getting the 2nd bunny just for yourself (with the distant hope that they might bond some day).

If you truly want a bondmate for your current rabbit, the only way to do that for sure is to go through a rabbit rescue. There, she can meet other, already-fixed rabbits to pre-screen for potential compatibility. With rescues (different than generic shelters) they will work with you to ensure you wind up with a match. If one rabbit doesn't work out, it can be exchanged for another.

Do you still have the male that was used for breeding? What's happening with that one? Is he neutered?

Rabbits do best in pairs... and pairs can be difficult enough to achieve sometimes. Getting trios or multiples requires very docile, submissive rabbits and plenty of experience bonding.
Z

Hi, both babies are very cute but as was said above you can't really figure out their personality at 5-6 weeks of age, it's way too early.

I will answer your second question first, to bond them as trio. They will be two unneutered males and will definitely have problems bonding, you will need to separate them at 10 weeks and keep in separate cages/areas until they both are neutered/healed, so about two months after surgery, from week 10 until say week 16 neutering and 8 weeks after that, it's from week 10 until week 24, fourteen weeks at least it's 3,5 months. Are you ready for that? Also there's no guarantee that they will bond after that. Do you still want them to have fun for two weeks as you can take them from breeder when they are 8 weeks and you will have to separate them when they 10-12 weeks as they will start fighting and marking their territory basically pee everywhere.

Also I asked already on your other thread if your girl is spayed or if you are planning to spay her soon? Because if not it won't be easy she can get pregnant really quickly!

I agree with what other people said I would look for one neutered male rabbit for your girl and also agree with that you need to think about her preferences and not about how cute and how you like those new rabbits, they are very cute and I fully understand that but believe me cleaning three cages isn't funny and you will have to keep them so they can't even see or smell each other, not much fun.
M

I definitely know to keep them separated until they're all fixed & all healed up. & I realize that will be quite a ways down the road. & yes, my girl is spayed. I bonded my 2 previous rabbits before, & the female that I had at that time was sweet with me but very territorial with any other animal. My 60lb dogs were scared of her lol. I thought she'd never bond but I ended up having to look after a male bunny & decided to see how they would do in neutral territory & she kind of ignored him for the most part. Started taking them on stroller rides & car rides, the female was being stubborn with bonding from time to time so it did take 3 months & I almost gave up, but the male was so patient & submissive to her so it worked out & they were 2 peas in a pod after that.

I think I've decided to definitely not do a trio. I did a lot of research on it last night & I think that will be more than I can handle at the moment, so never mind that question. But still having trouble deciding between the 2. If they ended up not wanting to bond, that's fine. I could easily house 2 rabbits separately if need be, I've done it before. I'm not going to be rehoming anyone if a bond doesn't work out, so no worries there
I do actually foster with the local rabbit rescue. Most of the ones they have for adoption at the moment are either females or already bonded & need to be adopted together. I was fostering a Californian who was very sweet. I had him for a while & was starting to consider adopting him myself but someone beat me to the punch & I didn't have the heart to tell them I wanted him instead, heh. But I'll still see him from time to time & he's definitely got it made now. They had 2 other males that I wanted to foster to see if Runa would do well with 1 of them, but they got adopted before I could get a chance :/

As far as the adult breeder bunny, he belonged to someone else who was rehoming him, so Runa & I had just gone over there to see how they get along. It went a lot better than I thought it would but I went home, told her I'd sleep on it & then he got adopted by someone else. I will do some more thinking on this. I appreciate everyone's input
Z

Oh so you have lots of experience then, it is great that your girl is spayed already and if you decide on taking one rabbit not both that's one less problem for you, for which one of the two I can't answer they are both so cute so just listen to your heart! I personally like Keanu better but it is just visually and it is based on just one photo! The problem here that at 5-6 weeks you can't really judge about their personality, they may change dramatically quite soon. As Watermelons said 6 months old and neutered would be much easier but I understand you just like challenges so good luck and keep us informed
M

I officially decided on Keanu I'm hopeful they'll bond once he's ready, but I will definitely be prepared if they don't, & that will be fine I'll try & post some updates when I can.
I'm excited to see how this all goes ^-^
Thank you everyone for your input; I know this isn't the ideal way to go about bonding, but I'm honestly fine with having 2 separate buns if it comes down to it. Will keep you guys posted!
You must log in or register to reply here.
Share:
Facebook Twitter Reddit Pinterest Tumblr WhatsApp Email Link