Recently I got a dog, the dog always lived with cats when he was with his parents. He is calm near the bunny. I got a fence (where none of them can see to the other side) in the room in a way the two of them have their space. The problem is when I try to get them close the dog is ok with the bunny, he only smells it but he is really afraid. So I always stop it in the first 10 seconds because I dont want the bunny stressed.
I am really desperate because my bunny is a bit sad since I got the dog. I really want them to be friends but I am afraid of stressing the bunny. What is the best approach to start presenting them and try to make the bunny feel safe?

Thanks a lot
S

Your rabbit is scared because you have brought a major predator into his home, in your bunnies mind he is now in constant danger all the time. Just because he cant see it, doesn't mean he cant smell and hear it.

You can start by giving the rabbit a dog free space, a different room where the dog cant be. You will naturally start to smell more like dog, as will the house, and over time he should become calmer. Once he seems calmer you can leave something that belongs to the dog in the bunnies space. This can take a while for the rabbit to adjust to. Just like bonding, you can let the dog smell bunny things as well. DONT let him play or dig it. Sniff only. When they stop reacting to each others smell you can try an introduction. Keep the dog with you while the rabbit is out- don't let the dog approach the rabbit, let the rabbit come to you.

The term friend is a bit loose. Personally I dont think dogs and rabbits should be left together unsupervised ever ( and I have dogs and rabbits)
Some rabbits become calmer over time, and some rabbits will never be okay with a dog. I had one that would freeze up every time a dog was near, and another that would attempt to attack the dogs in panic, even when the dogs where just asleep.
Those rabbits needed to be kept in a room that the dog did not have access to, because they were unlikely to ever be able to feel safe near the dogs.

My thoughts about that:

Short encounters will not help. If the dog ignores the bunny after a short time it would be best, both dogs I had here did that, no hunting instinct and not easily exited about other animals. I just ignored the rabbits reaction, gave them all treats as close together as possible, when they preferred to hop away that was ok too. Soon enough they learned that the dog is no real danger. The first time, they stayed wary for some days, I kept them in the same 2 rooms together most times so they got used to the other being around, novelty worn off, after a week the dog has to step over them when they are lounging in the way. Never show anxiety when introducing, dog and rabbits will pick that up. Act like rabbits or dog around is the most normal and boring thing in the world.

It really depends on the dogs character, and when you introduced them just act normal with him, don't mention the bunnies, no trying to make him notice them. There wasn't any relation between my rabbits and the dogs (which were here for max 3 weeks at a time), they just lived as room mates.

Smell doesn't mean anything to my rabbits, and if something doesn't behave like a predator (like following them interested), it isn't one. So it's important to not let the dog act like one, I kept them on the short leash at the first encounters, petted them, gave treats, the rabbits close by soon were just something normal.

I guess the size of my house bunnys did help a little.
Good luck.

@Preitler, I can't say size of my rabbits helped, lol.

What behavior is making it seem like the rabbit is afraid? There are a few rabbits that truly are petrified of dogs, but the majority of pet rabbits don't seem to be. How the dog behaves will influence the rabbit's reaction. Some dogs simply have too much genetic disposition to overcome and will never be safe around a rabbit. Many, though, can be trained to be just fine.

Introductions are important and so is the entire process. I explain in detail (with photos) the process I've taken several times to introduce a dog to rabbit. You can find that on my website here. It should give you a guideline to use with your dog & rabbit. 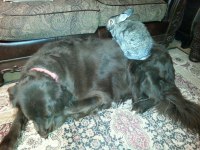 I tend to warn people off of dogs and rabbits, because I have seen a lot of disasters. A lot of people forget their dog is a predator and should be treated as such and don't take predator behavior seriously, while expecting a relationship that is rare to find between any animals that are not of the same species, let alone animals that are known to hunt and be hunted.

Im glad posts like yours exist, but I will always preach extreme caution. And that animals should never be left unsupervised together!

Always best to err on the side of caution.

If one can see their dog consistently refrain from getting over-excited when a rabbit is teasingly prancing right in front of him, then it's much easier to be confident with their relationship.

Here's an example just for fun...