I've had a female bunny for a year. I just got a new male bunny a month ago. I've been slowly bonding them in a neutral space and everything seems to have gone really well. Their pens were side by side in the main room and then I took them through to another room to bond.
Stella was a little territorial at first when Oreo came close to her pen but that went away after a few weeks.
They didn't really have any fights in the neutral space, a little chase here and there but that was it. They were grooming each other pretty much instantly and laying down beside each other, flopping, grooming, all the positive behaviours really.
I had them in their shared pen for a whole day and night then the whole next day but this morning I've gone in and there was a bunch of fur everywhere and Stella has a nip in her ear.

What should I do? Should I restart bonding from the beginning? I've seperated them just now side by side in different pens because of fear of them injuring each other.
I'm just not sure how to move forward now.

Were they in the same neutral space when this happend, or had you moved them or changed anything about their bonding area?

Since you've separated them now, you'll probably have to step back your bonding a bit, but maybe not from scratch. It really just depends on how they react to one another when you try a bonding session again. It may be that you accelerated their bonding too quickly because they seemed to be doing so well together, but they still had some relationship issues to sort out. So I would recommend taking it a bit slower and doing more daily bunny dates together to be sure they're more used to each other before doing the final bonding again.

When you do get to that final 24-48 hours of keeping them together, make sure to do this supervised if at all possible. Usually this means us bunny owners sleeping next to the bonding pen so you're ready to break up any minor scuffles before it escalates into something that will require separation and restarting the bonding.

They were not in the neutral space no, they were in the together pen as I thought they were bonded and ready to be together.
I think I went too quickly you're right, as they were getting on so well.
I separated them as her ear was a little bit bleeding so I didn't want anything to happen again and make a more severe injury.
I'll do some short dates over the weekend in a small pen in neutral area and see how it goes, then I'll do some longer ones over the week and see how it is next weekend.

That's likely the problem then. Sometimes when newly bonded rabbits are moved to a new area, this can set off new dominance and/or territorial behavior. You almost have to transition to the new area slowly. Like putting them in there for a few hours a day, while you supervise. Then return to the bonding area for the rest of the time, keeping an eye on them for a bit to make sure they settle back into the neutral pen ok. Then just keep expanding that time as they do well, until you can finally keep them there full time.

If their permanent space isn't a neutral area for both rabbits, it can help to do a full descenting clean(as much as possible) and a bit of a remodel to make this space seem new to both rabbits, before moving them in. Things like placing a sheet over pen walls, can change the area to seem all new to the rabbits.

The other option is having a neutral bonding area right next to their soon to be shared permanent home, if the permanent home isn't a completely neutral area to both buns. Then once they're bonded in the neutral space, gradually expand their space to include some of the permanent area. Then expand a bit more as they're ok with each small expansion, supervising each new expansion of their space until you're sure they're ok with each other.

Thank you these are really helpful suggestions, I will definitely try them!
I had Stella in the main room for a year before I got Oreo. So maybe she was just being territorial still. I'm just doing some small sessions over the weekend as I also found a nick on Oreo and I want to make sure it's ok. Saying that they are currently cuddled up and Oreo is grooming Stella so I'm hopeful!!

This is a picture from earlier today, as if nothing happened!!! 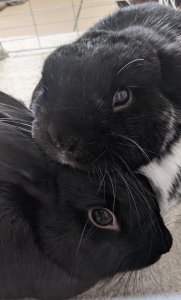 Are they spayed and neutered? If not that could also be contributing to the problem.