What to ask when bringing her home?

Our cousin shared a post of someone giving away their sweet loppy girl on facebook. Dad and i took a liking to her so we contacted her owner to ask if she was still looking for a home. The post was uploaded yesterday and was titled urgent. Lucky for us she was booked for someone but cancelled due to possible cat hazard so she was booked for us to be picked up on saturday.

We'll see to it that she can get a vet check on that same day(or close enough to that) either in Tartu where she's in (three possible savvy clinics) or maybe in Rakvere when we can't. Of course we could see if the one in Iidla has time to see her.

She is said to be 6mths old and not yet spayed, we're ready to take care of that ourselves. The owner said in the comments that she free-roams and has had successful contact with critters and one other rabbit. She is about 1.5hrs drive away so it's not so extremely much. It would cost us less on fuel than to pay for a farmer's bun. She's looking for a loving home so why the heck not? Estonian equal to animal shelter buns, probably.

I was looking up the post and i saw that she had a slippy floor, cage and water bottle and food dish w unhealthy stuff in the bg. So i was sure to ask if
Is there ANYTHING ELSE worth asking her owner?
Here's her post : 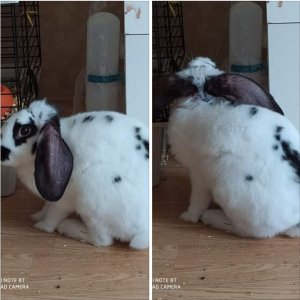 You said she was with another rabbit previously? And she's 6 months old and intact. So it would be wise to ask her owner if other rabbit was a male or a female and how long time ago it was. Because it's not uncommon that if she was housed with a male or had contact even for a very short time she can get pregnant in seconds.

Also as I understand from your other posts, your new young male rabbit isn't neutered yet and he likes escaping his pen. That is potential problem because if there's a female around he will not only jump over the fence but he will dig a hole in your solid brick wall to get to her. And even if you neuter him tomorrow he will still be hormonal for 2 months after, and he still can get her pregnant up to 4 weeks after he is neutered. So think about it and be prepared. If decisions already made, it would be best to keep them as far apart as possible so they had no chance to see or smell each other. And don't start any bonding or introducing them to each other before 8 weeks after his neutering.

Otherwise you are getting yourself a little fluffy trouble.

Although i would be fine with caring for, and finding safe homes for all the kits if they ever were to be born (which i too hope is not so), i'll also add your suggested question to the pile of things to ask. If she did happen to have contact with a buck just recently i think that if i mention that to the vets they'd be willing to fo the asap spay sooner than later. Let's just hope it's not an intact buck she happened to interact with.

The fact with Storm is that he was neutered some while ago. Right on the first of july to be really exact. And now his condo has a secure door and a roof even more so. No more escapees at night.

I plan on keeping her apart from him anyway for at least two extra weeks (maybe even four or more depending on how they decide to interact with each other) until she's recovered after she gets spayed. He'll stay in the living room with me, and the girl will stay with my parents in their room. There's a big kitchen in between, so that's probably the safest farthest distance for them.

So either way no matter what i do, when i play it safe there will be no time left for him to leave his seeds anywhere.

i'm planning on asking around the savvy vets if they're able to do the spay soon.

Oh that's great that he was neutered, then you're halfway to success. I would suggest to wait at least 8 weeks after neuter because he can scary her with all humping and all, it can affect their future relationship. Better wait a little longer and introduce them when they are calm and relaxed. Good luck!

Just to ask: besides from stopped humping(he never ever humped, got fixed before that) and marking and obnoxious aggression, and overally more calmer chiller him what other signs can/should i notice?
D

This may sound odd but take a plastic bag and bring some of her wet bedding and poop home and put it in her litter tray.

So i asked her owner:
She's not vaccinated. She was with another female. She's given away because the lady's dog didn't accept her. We got a vet appointment.