We already knew we had to keep Xiao Wu and Erlong separated. Xiao Wu is an already established queen so she's going to be extremely territorial. And so I had to turn my entire work area into Erlong's living space while she recovers from her surgery and the initial shock of a fourth move before attempts at bonding can begin.

We learned that she was abandoned at the shelter by her owners and had to undergo the spaying and fostering before being put up for adoption. The mark on her ear indicates being spayed. 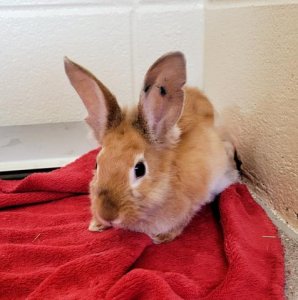 A picture of her in the shelter. Was named Hubert.

I had to stay up all night to make sure Xiao Wu could not see Erlong at all. She has attempted to enter the enclosure multiple times and I don't want that to happen. And so....

Xiao Wu can't see Erlong to try to hurt her and Erlong can't see Xiao Wu so she can eat and explore in peace. Xiao Wu looks displeased with my decision to protect them both.

Erlong has gained more energy after staying the night and eating some food. With a fresh litterbox and some fresh hay, she's more energetic than she was the day before. Zooming around her enclosure, mini binkies, throwing toys around, digging at her hidey box, nudging my leg.

I just LOVE her! She clearly has this 3 legged thing sorted and definitely isn't slowing her down. It's so great that you found her and have given her a new home. Somewhere she will be cared for, loved, and appreciated. I look forward to hearing about her new adventures in her new life ♥

I don't know what is in her left ear, but it felt hard and she doesn't sit still long enough to get a look. Hopefully the vet will know when we take her to see them next week (the earliest we could get). Here's to hoping it's nothing serious. This poor girl probably had a hard start to her life. She's actually missing a large chunk of her ear on the right side. Almost as if someone cut a piece off. A small piece on the left ear, and I think the entirety of her left leg, bone and all, is gone. Whoever had her before me were not nice people. Good thing this little girl has some spunk in her. She's not as skittish today as she as the first two days.

Congrats on helping out buns in need! Liu Erlong is such an adorable one. I watched the vids first and at the start couldn't even tell that she's a tripod. She's definetly got it sorted out.
What was her naming process like?

Catlyn said:
Congrats on helping out buns in need! Liu Erlong is such an adorable one. I watched the vids first and at the start couldn't even tell that she's a tripod. She's definetly got it sorted out.
What was her naming process like?
Click to expand...

Her naming process? Wasn't one. I knew that if we were going to adopt her, we would call her Liu Erlong. This, of course, was before we learned she has three legs.

So sitting back, watching scammers get flooded by scam baiters, and look to check on Erlong. What do I see? This little princess of TIFA (Triumph in face of adversity) eating her cecotropes! This is great news! She used the hay in her litter box to balance herself to clean! I'm so excited!!!!

I know! I love it! Amazing how well these babies adapt when given the chance.

After my momma bun had to have her eye removed due to infection(and became blind due to a cataract in her other eye), it didn't even slow her down. She just kept cruising along, a happy sweet little bun.

So last night, while my husband and I got close to falling asleep, we hear this thudding sound. My husband gets up to investigate. It's Erlong making laps around her area and doing binkies like there's no tomorrow.

In fact, I get up this morning and get their breakfast, and this little girl is doing binkies, still.

She's not really a big fan of her hay being on one side, but it was recommendation of someone of a Tripod bunny group on Facebook. If she shows even more signs of disliking it like this, I'll change back to how it was before.

She's got attitude! She thumped at me because I didn't immediately give her pets when she nudged my leg. 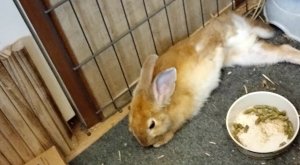 And Miss Xiao Wu is no better. Peeing on me to say "You're my human!"

I love these two.

She sure loves laying in her hay. Funny bunny.

She looks healthier, too, compared to when we got her.

Erlong is coming along real nicely.

Maybe the incline of the pile of hay is like a ramp and helps give her some extra support and traction when getting up. Plus if she gets hungry, she's got a snack right there. She doesn't even have to move

JBun said:
Maybe the incline of the pile of hay is like a ramp and helps give her some extra support and traction when getting up. Plus if she gets hungry, she's got a snack right there. She doesn't even have to move
Click to expand...

She's actually moved the hay to the side where it doesn't have hay.

Just so you all know. That litter box is right next to my chair.

She decided to tease Xiao Wu by being between the blanket and barrier. As soon as Xiao Wu saw her, Erlong took off to her litter box. Xiao Wu went nuts, trying find her.

Man, these rabbits are resilient!

Never have I ever met a rabbit turn their nose up at Alfalfa and would rather have straight timothy. Okay. Okay. Erlong. Make sure you tell the vet this so he knows not to tell us to get you alfalfa hay.

So Erlong had her vet appointment today. Chances are she had ear mites so the vet treated her for flea and mites. He also set up a future appointment for next month to check on her ears to make sure it's not serious. We, also, learned that she lost her leg around the same time she was spayed. The stitches are around the same age. Also, the entire vet office fell in love with her.
You must log in or register to reply here.
Share:
Facebook Twitter Reddit Pinterest Tumblr WhatsApp Email Share Link