Do you even get to see her anymore, or just her head poking out My bunnies loved their bed too, though they preferred cuddling up on top on the blanket.

JBun said:
Do you even get to see her anymore, or just her head poking out My bunnies loved their bed too, though they preferred cuddling up on top on the blanket.
Click to expand...

Yes. She has to come out for water, some pellets, and all the hay she demands.

I can't keep the lid on it because she keeps going into the hay box. T.T

Erlong killed my audio cable for my chair!!!

My dummy self left it where she could reach it.
And I can't be mad at that adorable face!!

At least she's sitting on top of her bed now

JBun said:
They always seem to find a way to cause trouble don't they

At least she's sitting on top of her bed now
Click to expand...

Oh trust me. She's been on her bed, under her bed, eating out of the home made hay box, climbing into the hay box, eating while inside the hay box, zooming at odd times of day, flips her bowl when we don't give her the exact same food Xiao Wu gets....
She's a wild one.

Is it just me or does Erlong look much healthier?

Oh and check out this grooming champ!

I had Erlong and Xiao Wu eat next to each other. They didn't have a competition over food. They just chilled and ate. Last night, though, they were competitive relaxing. So much so, Erlong flopped hard and scared Xiao Wu. 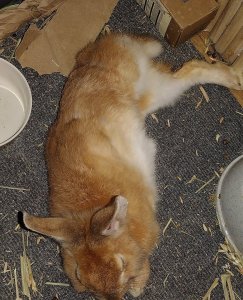 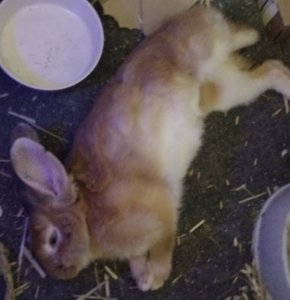 I swear she looks dead in that last photo. I guess it's not called the 'dead bunny flop' for nothing. Yeah, I'd say she's comfortable

I swear she looks dead in that last photo. I guess it's not called the 'dead bunny flop' for nothing. Yeah, I'd say she's comfortable

Trust me. If I wasn't watching her go into her dead bunny flop, I would have assumed she did die. But no. She's currently on her bed, eating her sea grass mat. <3

So gave Miss Erlong a treat just now. When she went to grab it, her teeth bit my finger. Not hard. Not at all. Just enough to realize it's not the treat and then took the treat. Oh! And this adorable rascal kept us up half the night, doing zoomies and throwing her bowl everywhere.

Every time I bring the camera down to her level to take a picture, she hides under her bed or in her box. And every time I move her grass hut so I don't risk stepping on it, she moves it to her liking and it's in my way.

So we had to clean her underside today because she can't really clean her right leg all that well. Upon picking her up to wipe her leg off, we noticed she feels fully. She's gained more weight and the hair on her cheeks got longer. We think she might be a lion head.

So I woke up to Erlong doing zoomies and binkies. Learned she and Xiao Wu have been just simply relaxing next to each other rather than competitive relaxing. Xiao Wu has stopped grunting at Erlong and they both have attempted to nuzzle each other through the bars. My husband commented that the way Erlong binkies, she doesn't look like she's missing a leg. We're talking getting some air binkies. If we could catch that on camera, that would be the highlight of my night. Erlong has also discovered the joys of pushing a treat ball around to get treats.
I've actually spent time on her level for an hour earlier, get her used to me and not as a booming voice with a pair of legs in a chair. (I work from home.) She still is skittish, such as running to hide the moment I move my leg or get up to go use the bathroom. I think I'll take time to sit on the floor with her and play my video games, let her approach me.
B

I look forward to those binky videos.

Perfect! I'm glad they're doing it because they actually are starting to like each other. Floor time with her should help. It's the best way to help a rabbit learn to trust and be comfortable with people.

Doesn't she look absolutely adorable?! Look at that tuft of hair between her ears!

ArtistChibi said:
Doesn't she look absolutely adorable?! Look at that tuft of hair between her ears!

She's beyond adorable.
That tufty bit reminds me of the hair crowns my frenchies have often shown. Storm is in his moult rn and he has the most glorious floofy crown, much like Liu has in this picture!