What is your bunny named and why?

What is your bunny/bunnies names and why did you name them that? My bunny is named basil because he loves basil and I just really like the name. I also really like the plant

. Any time I have basil in my hand he runs right up to me and just takes it from my hand.

My bunny's name is Remington, Remy for short. His name is Remy because when my parents decided I could have a rabbit, I was thinking of names, and my sister came up with the name Remington/Remy.

Basil is such a cute name! The plant is pretty and the name is perfect for a rabbit

I named the girls Narla after the lion king and Dotty because of her markings (she’s the black and white one in my profile pic).

Apollo is my bunny’s name, because his previous name was Philip but I didn’t really like that name for him but still wanted a name with ‘p’ in it. I was thinking through the names ‘Philadelphia’ or ‘phantom’ until one day while I was doing some schoolwork (the day before we adopted Him), my workbook was talking about the Greek god ‘Apollo’ and I really liked the name. And thus, the name of my little mischievous bunny was given.

Apollo’s Slave said:
Apollo is my bunny’s name, because his previous name was Philip but I didn’t really like that name for him but still wanted a name with ‘p’ in it. I was thinking through the names ‘Philadelphia’ or ‘phantom’ until one day while I was doing some schoolwork (the day before we adopted Him), my workbook was talking about the Greek god ‘Apollo’ and I really liked the name. And thus, the name of my little mischievous bunny was given.
Click to expand...

That's really cool and Apollo has such a cute name!

Before I got Theo, I was actually looking for a solid black female Mini Rex. Theo had a sister that was exactly what I was looking for, but as soon as I saw Theo I knew "That is my rabbit!". I was having a really hard choosing a name once we picked him out, and my whole family was trying to come up with something. Everyone liked 'Leo' because the irony of naming a rabbit a word that means 'lion' was supposedly funny, I didn't think so. My sister was working on her Latin and Greek words one day, and the root word was 'Theos'. Underneath that were several words that came from that root and one of them was 'Theodore'. I really liked the name because it means: a gift from God, and that was what Theo was.

When I was thinking of my bunny’s name, I wanted it to be something special about her. So I went off Harlequin (her coat color) and came up with the name “Harlow”.

The president of the rescue named her "Precious" because she is so tiny and cute. The rescue president saw her hopping around the rabbit hoarder's house (where she was born and lived the first few months of her life) and said, "Look at her--she is just so precious!" and the name stuck. I thought the name was perfect for her and never changed it. Just celebrated her third gotcha day yesterday .

My bunnies names are Oden and Torsten the next one will be named Embla, I’m still waiting on her.

The names are based on the nordic mythology. Torsten is infact combination of thor and rock in my language. But I call them Toste and Odin because it sounds cute. While Embla was the first human woman created by Oden and the name means “little elm”. The elm tree often symbolize underworld and faries. I think the name will fit in perfectly with my boys and the theme I go with girls (plants/flower). My own name means flowering

While Odin got his name because he was so cute and charming. Odin name also stand for culture and art, I came up with his name when I was going to pick him up and looked at pictures of him. While Toste was supposed to be called Tor (eng: Thor) but it sound so harsh when calling that name and not cute at all. But Toste got the name because he’s such a growler and had no problem to fight me, Torsten means tunderstorm (swedish: åskvigg).

Before I named my bunnies they was called Lilleman (little man) and Teddy which totally didn’t fit them. Which Teddy is a fighter? but it’s true that Odin is small

My bunny's name is Daisy. I named her that because the daughter of a friend thought I should name my new puppy Daisy, but we had already picked out a name (Ella). A month later we got... Daisy.

Randall (after Randall Boggs from Monsters Inc)
Van Hohenheim (from Fullmetal Alchemist: Brotherhood)
Vashti (after the singer Vashti Bunyan)
Summer Time Wave (came already named, named after his father Endless Summer)
Steven (after Steven Universe)
No Regrets (lol I bought him on impulse after 3 days no sleep. His registered name is Q9 though because I was too embarrassed to put that on his paperwork)
Izumi Curtis (from Fullmetal Alchemist: Brotherhood)
Cersei Lannister (from Game of Thrones)
Devi (from The Name of the Wind)
Kiwi (random name, ended in i)
Bambi (random name, ended in i)
Loki (my friend named him)
Hanji Zoe (from Attack on Titan)
Lapis Lazuli (from Steven Universe)
Juice (random name haha he seemed like a "juice")
Larda** (self-explanatory, he's a very food motivated bun)

I have a general theme (especially for my female rabbits) that I will name them things ending with i... I think it gives them good luck
T

Our lion-head's name is Stormageddon, shortened to Stormy. Stormageddon is the name of a character in Dr. Who. Stormy was named by my son, and we kept it when Stormy joined our household.

As you will see, the majority of my bunnies names start with M... I don't even know why, but it flows

maybe because I think it brings good luck.

Missy - Meant to be a boy, the named we had picked out was Mr. Snuggles, so we thought Missy was close enough!

Ostara - Means "mother of nature". This sweet girl was definitely one of the best momma's I've ever had - Moxie is her daughter!

Emerald - Quite the special bun bun, my rabbitry is named after her! She came all the way from Ohio with the name, so I kept it. I believe they named her that because of her greenish-blue eye color.

Maverick - He was a rescue (blind in one eye... but that did not stop him). He was bonded to Missy, and named after my recently-visited trip to the Mavericks in CA (and because I thought "Missy & Mav" sounded cute).

Moxie - She totally has "moxie" (spunk) - hence the name!

Mochi - Such a tiny ball of fluff, and I was obsessed with the dessert mochi at the time I named her. She is pure white, which reminded me of the rice dough used to make mochi.

Minnie - Never have I ever seen a smaller bunny! Around 2 lbs. fully grown, yet perfectly healthy. I originally named her Oreo because of her coloring, but Minnie (short for minnie mouse) fits her perfectly.

Nibbles - This. girl. chewed. on. everything. Enough said!

Midnight - This one's pretty self-explanatory... he was a pure black bunny. Thankfully the name is gender-neutral, as 'he' was supposed to be a 'she'.

That's it for now! I could go on and on with my babies names too, but I do not want to bore you guys! I have a few threads with more name ideas if you want to check that out

Also... any M name ideas welcome! I'm sure I will need some of the near future haha.

Thank you, I love these! A few of them I have used on past baby bunnies. But Moana and Maggie are cute

Well this is a long and sorted story to say the least.

My Girlfriend and I were expecting a baby that we hoped to name Raymond. The sad and long story short. It never happened.

A few short months later her teenage sister had got a rabbit who was named BunBun officially named "Backwoods" (yeah, I guess its a hillbilly thing, I don't know) for her new born baby boy Logan for Easter. Well of course that was ill planned out and one night when her sister was assaulted by her boyfriend, she left him and was homeless for a few days, she stayed with my girlfriend and then abandoned the bunny with my girlfriend when she left. This was great for BunBun but unfortunately my girlfriend's husband wanted nothing to do with this sweet little bunny and wanted him out....... only a few weeks later BunBun was forced out of his new found home and into the car of my girlfriend's homeless meth addict cousin.

I tried helping her meth addict cousin for months but no matter how hard you try, sometimes the outcome is out of your control.

After hearing of this I immediately hopped into action to finally rescue this poor little fellow from this ongoing situation. I knew this little bunny had no chance with her cousin, as she was just released from the mental health hospital for a suicide attempt in my apartment and was also now homeless as well. Only a few hours later and with some bold cleverness the bunnynapping was complete. BunBun was finally safe with me!!!!!!

So now he is named officially now and forever...... Raymond BunBun Robinson. My girlfriends husband ended up leaving her and moving to Tampa, Fl. A month later she left us to move down there with her husband. So he lost his mother and I lost my lover and best friend, which is very sad because we all love each other very much.

Super odd how things happen in life. But he is super happy now. He isn't trapped in a crappy little cage all day and all night any more and has a true home he can and does call his own that is warm, loving, beautiful and comfortable. Now, he has a cute 2 story hutch and has the run of our place 24/7 pretty much......... eats and drinks like a king. He even made himself a little door in the screen door so he can hang out with me on the balcony at night.

Best little buddy I could have ever asked for, my friend, my family........ Raymond BunBun Robinson

Told you it was a long and sorted story. 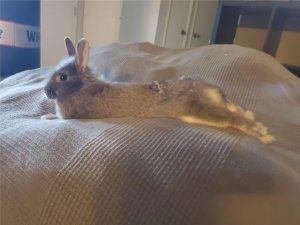 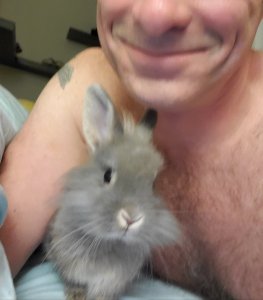 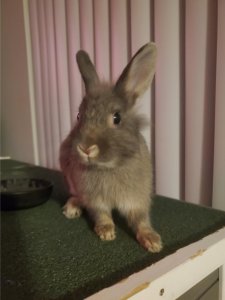 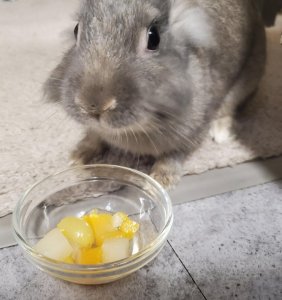