I got Snowball and Blackie in October of 2007. They bonded instantly, no process required.
One day while I was at work she had a seizure. When I cam home there was blood around her lips, some blood had dribbled on her chest, and she had lost all feeling in her left side. That was November 2017.
We put her down.
Blackie was never the same. Depressed, didn’t want to play, would only eat half his food (he was still saving half for her), he didn’t even want to cuddle anymore.
He died 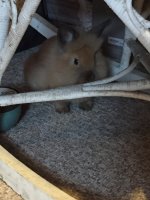 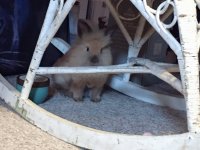 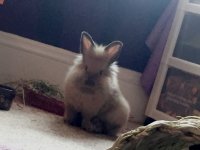 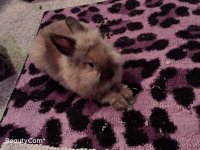 It’s been almost 2 years since Snowball and Blackie died.
On March 11, 2019 I got a bunny again.
Valdez (Desi), a lionhead with a double mane.
He really doesn’t want to potty train. Simply refuses to use his litter box for anything besides sleeping and eating.
I read articles telling me when he lifts his tail that means he’s about to pee.
He doesn’t do that.
He kinda reminds me of a toddler whose taking a **** in their diper. Puffed out cheeks and intense concentration.
First he’ll stay completely still. Then his eyes will get squinty and he’ll get this look of intense focus. Wait 15 seconds, then you’ll see a stream of pee start to surround his feet.
It’s weird.
———————————
I remember when I first got him. See I’m in my 20’s and can’t afford to move from my parents place yet.
So one day I brought Valdez home and put him in my room. Then I waited 3 days to see if anyone noticed his existence. No one did.
(This shows he’s not an inconvenience to their life’s)
Finally I gathered him in my arms and brought him out to the living room. I put him on my mothers lap and said “look who I have!”
She was pissed but couldn’t stop playing with all his fur.
As she’s playing with his ears and making airplane sounds, she says, “what would you have done if I had said no?”
My response was to just look at her and say, “I would have put him on your lap and let nature take its course.”
It took her 2 minutes to get it.
His cuteness was a force shield against “no”.

Meanwhile he’s on her lap and completely soaking up the attention. Hook- Line- Sinker
Last edited by a moderator: May 4, 2019 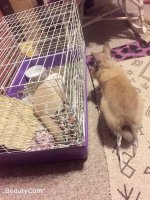 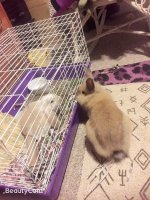 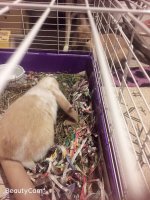 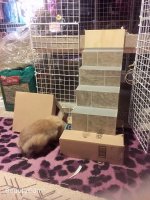 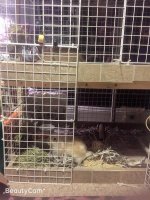 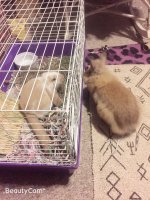 I felt bad that Valdez was alone so often so I decided to get him a girlfriend.
On May 3, 2019 I went to the OSRBA Mini Convention in Columbus.
Poor baby, her first car ride was 7+ hours in a tiny cage with equally emotional rabbits. Pennsylvania to Indiana, then Indiana to Ohio.
She is a broken cream, English Lop.
After picking her up I spent an additional 3 hours driving home.
The first thing I did was put her travel cage on my floor and let Valdez run.
His interest was immediate. He even binky’ed 9 times in a row. I’m lucky if even binkys 4 times a week!
I’m waiting for her personality to come through before I settle on a name. Even Valdez didn’t get named until day 5.

My parents hate having animals in the house, but, who can resist a bunny cuteness [emoji23]

My two bunnies after the first where more a surprise for my parents, when me and my brother after a trip came home with new addition to the family again.

I think my parents want me to get rid of the bunnies and turn up with a dog or cat instead. Just recently my dad hinted about a dog needing a new home and was up for adoption [emoji19]

A tip with litter training, just keep on cleaning up after him and spray parfume or vinegar where he goes. Also having him in a small area until he learned where to go, will help quite a lot.

The tail lifting up its really hard to spot and you will only be lucky if you manage to catch him doing it.

I think I’ve seen that tail lifting thing 6 times with the bunnies I have now, during these 2 years time period, of owning a bunny.

So I’m looking at my notifications, and saw this was coming up as individual posts instead of a blog.
I thought it was a blog.
Clearly I’m not as technologically advanced as the rest of my age group.
Wish I’d noticed sooner.
You must log in or register to reply here.
Share:
Facebook Twitter Reddit Pinterest Tumblr WhatsApp Email Link