Iris has suddenly decided to hump Storm? Could use advice.

I don't know what's been going on in that little sass girl's brain.
These two have not shown humping dominance even once. Not even during bonding sessions. Iris had decided without having any dominancy applied to her that Storm would be the boss.
So i found it odd that Iris tried to go at it with Storm. He was NOT pleased and they circled immediately. The second time, Iris ran off before she could get nipped.
I would let it slide as Iris has been showing a lot of bossy behaviour towards us, often grunting and shoving us away with that thick skull, she's even pushed Storm away from places she thinks are comfier for her.
But the problem is that Storm is the royal boss. He has no heart for the crap that Iris is trying to do. He's usually tolerant but i have no doubt that if he got too pissed, he would eventually send his girl to the other side.
They haven't had an environment change, no new people. No new foods or anything. Why would Iris suddenly get the idea to try and boss her husbun around like that?
I've heard from some sources that pets can get ticked off and act a bit weird when there are drunk people around, could that be an issue? Somebody in the house is running on a week long super-drunk state, is that affecting their dynamic?

How old is she now?

A disruption in the household, or loud voices, could maybe cause some upset or anxiety in rabbits and cause unusual behavior.

She's almost a year old now. She was born somewhere in mid-to-late december, spayed early-mid-july. It's unlikely that her teen-ness is the problem.
Yeah, but there was an extremely drunk person, some really loud tv and yelling going on, so i get why she would become stressed.
As the house has quieted once more, just about how long would it take for her to stop annoying the sir if it were truly from a disorderly household?

Iris tried to get on again and Storm was mighty pissed, he thumped for a minute straight.
Still, for their safety, i'll have to let Storm roam the room while Iris stays in the condo.
I'd say that Iris needs the space more but the sir is more behaved for an all-night freeroam, he won't crawl under my bed to dig at the insulation foil there. He will have a temporary toilet and water bowl.
They can see and smell one another and flop by the grids, that's the best i can give. I really hope that a night apart won't damage their relationship...
Last edited: Nov 5, 2021

It depends if that's actually the cause. If it is, then I would think a few days of everything in the house being back to normal would do it.

Another possibility is the change of seasons. Like what happens with 'spring fever' and the upsurge of hormonal type behaviors that can happen then. Girl buns in particular seem most affected by the changing seasons. If it's this, then it could be a few weeks before things settle back down.

Ooh, alright.
My boys haven't had an issue with it, but as Iris is my first girl, and a temperamental one at that, it could be reasonable.
My parents think that it's just her trying to claim dominance but i disagree. She wouldn't be the one to suddenly go into dominance squabbles. Not when she'd decided way back then that Storm is boss.
Also turns out that the lady is desparate for her hubby... She jumped a 90cm wall, almost right into my arms. Covered the condo with blankets. She then decided to ignore her water bowl and dip into a foot-bath trying to get to the sir.
Aand Storm just flipped his temporary water dish. Great.

Lucky for the sir and i, the lady was just runnibg rampant for the weekend. She returned ro her senses little before yesterday morning.
The upset was most likely from the loud argument held at the house the other noon.
And look what i got sent through the chat: 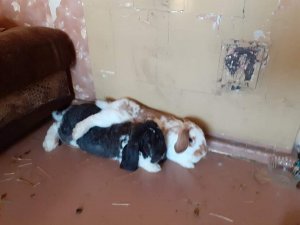 Dad said that Iris was adamant on being just in between her sir and the wall. So they've completely made up; Storm wouldn't let just anybody lounge on him like that.

The lady's behaviour has emerged once again. This time round, there has been nothing new for a long while and she went for him again. She's putting in the most effort when Storm is just trying to fall asleep.
I'd like to provide him with a place to get away from her if he chooses, but he's bigger; whereever he could squeeze to hide, Iris could just follow suit and push him out. He jumps higher than her but i don't like the idea od heights being a hideout for him.
I need some helpful ideas...
You must log in or register to reply here.
Share:
Facebook Twitter Reddit Pinterest Tumblr WhatsApp Email Link