Since I moved in with my boyfriend (late October) i’ve had my rabbits eating hay cubes because i can’t figure out how to manage feeding them hay without it getting ground into the carpets.
I have an x-pen run on top of some foam mats covered with fleece (Pup will chew the mats to shreds if he can get to them) but the other issue is that Pup will push the x-pen panels off the foam mats and also loves to drag everything he can get his teeth on all over the room. He is my main concern. Muffin and Mrs Baby will leave their hay where it is and eat it like good babies, Pup wakes up every day and chooses mayhem. Anyone have any hay management tips?

A photo of your setup could help. It is important to offer real strands of hay. The hay cubes are no substitute for the long strands. They need to chew the long strands to grind down their teeth. This doesn't happen with hay cubes because they are simply gnawing on the cube, not moving their jaw in the figure 8 motion required to chew long hay.

This is the setup as it is right now.
One thought im having is to get a storage bin and move it to where the litter box is currently, line green outline with cardboard as an extra measure to contain stray hay because PUP WILL FIND A WAY. Move the litter box to the blue outline and maybe cut a hole into the side facing the litter box?? I’m trying to think of damage reduction... 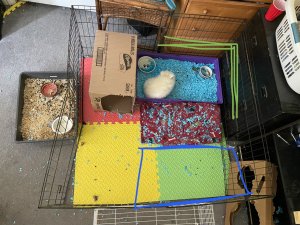 Where is her hay now in relation to that photo. I dont see any and they need a good pile the size of them daily.

You really need to get a better base for the pen. Like a piece of plywood with edging/baseboards holding the pen in place. Then you can use coroplast or cardboard in the corner the hays in to keep the dog from pulling it through. But it sounds like speaking to a dog trainer would help with those issues because the dog should be trained to not do that regardless.

Is Pup the name of your rabbit?

The idea of getting a storage bin for hay is on the right track...however, it is likely it would be turned into a potty spot for rabbit. I'd suggest modifying that idea a couple different ways. One is to use a storage bin as a litter box and as a way to feed hay. Rabbits won't eat soiled hay so it is fine to put hay on top of litter and then refresh that hay twice per day.

I noticed the Carefresh making a mess as well (as it tends to do). I'd also suggest switching from Carefresh to wood pellets (not shavings). Wood pellets are super, super cheap. They can be found at hardware stores or feed stores. Some pet stores carry them but they up the price significantly.

By combining the litter box and hay feeding into one container, it also helps preserve space in the small-ish pen.

Here is a photo of a bin with high sides being used as a litter box (the hay rack is optional, not necessary): 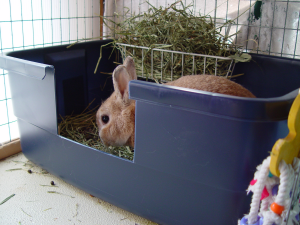 As for using the pellets as litter, the following poster shows how to set it up. It shows a low-sided box but you'd do the same thing with a high-sided box: 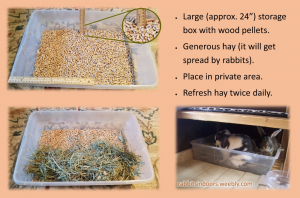 On a separate note, I'd like to caution against that cardboard box near the pen wall. A box like that could serve as a step up and over the pen -- especially with that small table conveniently nearby.

I THINK I FIGURED SOMETHING OUT!

Using some old chewy boxes and another box, i was able to turn the litter box into a half covered litter box, with the covered half containing hay and then lined the other side of the litter box with another chewy box! Tenacious little mr Pup (who is in fact a rabbit lol i don't own a dog) can't move either cardboard structure because they're both weighed down by the litter box and held in place with the former hidey house!
My barn manager even donated two flakes of her very high quality hay for my bunnies to try, bless her buttons!
I was also able to line my big girl's litter box to keep her hay contained too! So we'll see how my set up holds up overnight! fingers crossed!!

P.S. I always use wood pellets for my litter boxes, that specific litter box has been the exception because I needed it to keep my elderly fellow comfortable and dry during his last weeks with us. It worked better for him than the wood pellets. Now that he's crossed the rainbow bridge, i'm finishing off the bag before i switch back.
You must log in or register to reply here.
Share:
Facebook Twitter Reddit Pinterest Tumblr WhatsApp Email Link