Adopted bun has ring on his foot

Hey everyone, as some of you may know, we adopted a rex called Duke who is a year and a half. We adopted him a few weeks ago and since then he has been such a sweet boy, zooming around and flopping everywhere.

We noticed he has a mild case of sore hocks and bought memory foam mats and placed them in the enclosure. When I was looking at them to check if they had improved I noticed that he has a metal ring on his foot. It has some sort of code on it, so I assume it was to mark him in some way? I have reached out to the rescue we got him from but we have not received a response yet. He seems completely fine with it now, but I still have a few questions-

-Is there any chance it is causing his sore hocks? He does have less fur on his hocks, but the ring is on the same foot he has a sore on and just wondering if they were linked, or it was just bc of the lack of fur?

-Will it cut of his circulation?

-Does anyone know if it could removable, as we plan to ask our vet to remove it if possible?

-Out of curiosity is the ring for marking him or something else? 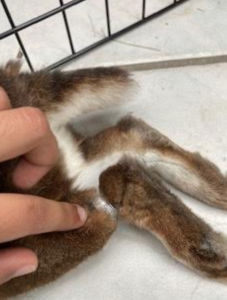 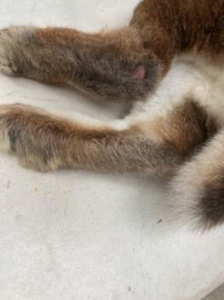 I definitly would remove it, you wouldn't see if it causes problems or pain unless it's very bad already. Never heard of rabbits being marked that way. Or any other mammal.

I looked into it, apparently it’s a way of marking show rabbits? The code is apparently meant to represent the owner, the age and the breed of the rabbit, although not sure, maybe someone who has experience in showing rabbits can comment?

I would remove it anyway. If you wanted comments from the show people/breeders you better ask in breeders forum, as far as I know they tattooing rabbit's ear for the shows but don't think metal ring would be very common thing since it definitely makes him uncomfortable and can cause pain etc. You are his new owner, take as many clear pictures showing numbers etc as you can and remove it asap

Yes, it's how they mark show rabbits there in the UK. Here in the US they do ear tattoos. I doubt it's contributing at all to the sore hocks as it shouldn't have been applied too tight as to constrict anything. If it had, you would be seeing more of a problem with the foot itself swelling, or fur loss and a sore around the ankle. But I would definitely have it removed.
D

Yes, it's a breeder thing, putting those rings on. Poor bunnies. I'm very surprised the rescue didn't have it removed when he was neutered. Nothing to do with the sore hocks but I would still have the vet remove it.