Taking blood from the ear?

This has been bugging me for months! The last time we took Thumper to the vet they shaved his ear and took blood from it. I know different vets will do different things but it's something that's been bugging me. Plus the time before that the vet tech asked if Thumper threw-up, I almost told her that rabbits are incapable of throwing up but I didn't say anything because maybe she had a brain fart moment and simply forgot that but I dunno. When Thumper had the snuffles the vet was like "it's only a case of the snuffles" and gave him medicine and critical care and he recovered but I recently heard that the snuffles is actually dangerous and she treated it like it was no big deal. I just don't know how to feel about their rabbit care, they do great with Demon and our dogs whom passed. What do you guys think? Should I try to find another vet or stick with these guys?

Drawing blood from the ear is normal.

It may be the vet tech just needs to be educated about rabbits. Though if the vet said this, I would certainly question their rabbit experience, and very likely not go back to them. If your vet isn't an experienced rabbit vet, it probably would be a good idea to try and find a different more knowledgeable rabbit vet, at least for the more complicated rabbit health issues, in case any arise.

'Snuffles' is a broad term to refer to an upper respiratory tract infection in rabbits. Usually it will refer to it being caused by the bacteria pasteurella, but not always. If the 'snuffles' is due to pasteurella, then yes, it is more serious because of it's highly contagious nature(between rabbits), and it's difficulty in curing it(which doesn't easily or usually occur). If the 'snuffles' is due to a different bacteria like bordetella, that can be much easier to treat and clear up in rabbits. If your rabbits 'snuffles' cleared up and it never comes back, it's likely your rabbit did not have pasteurella. 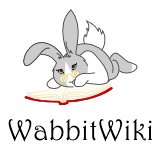