Recently I became aware that it really is a struggle to scoop loads of carefresh out of the bottom of Remy's cage with lots of poop. He really shouldn't be going to the bathroom outside the cage and it was a hassle to clean up. A fellow rabbit owner on here gave some great advice about using fleece instead, since it could help with litter training more and reduce accidents. The carefresh was also in the litterbox so it could have been confusing to him on where to go to the bathroom. I went out and bought him a new litterbox, bigger and cleaner, and some red fleece. I think he actually really likes it, he flopped over on the fleece and was digging at it a little. He's never done that with the carefresh. (Hopefully the digging doesn't become a problem, I tried to discourage it) If he eats it that will be a issue, but there's not a lot to chew, so I think it'll be fine. Remy only is in his cage at night when I can't watch him, so I wanted to make it more comfy. Below is a picture of his new setup.

I added some of his outside toys incase he wanted some!
Sorry if the lighting and quality isn't great, I'm on my chromebook
(His veggies weren't there since he had just eaten them and I took the bowl out to clean) 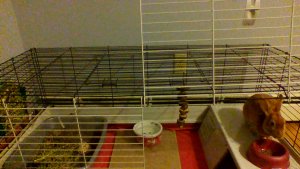