I’ve had my first rabbit, Herman (male), for over a year now. About six weeks ago, I adopted a second rabbit, Matilda (female). Herman has been neutered for 10 months now and Matilda just over two months. When I’m filling their bowl with pellets, they both get very excited. Herman just dances around, but Matilda constantly chases Herman around my legs and tries nipping his butt. I’m not sure what to make of this since they are just fine together otherwise with no aggression. They had a relatively easy bond and have been together full time for two weeks now. Are there any suggestions for how to deal with the nipping? Thanks!

Food Aggression, so feed Matilda first then Herman and move the food bowl away from each other. 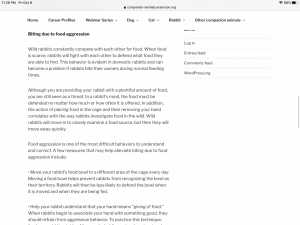 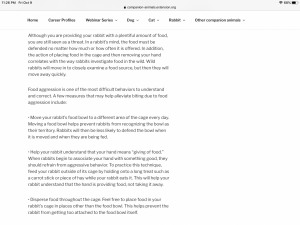 She's just asserting her dominance. And sometimes, like at feeding time when she gets extra excited, this can trigger that even more. You could try two separate bowls for now, then eventually once they have been bonded a bit longer, you may be able to take it back down to one bowl. If that doesn't work you could try scatter feeding.

They have been together a year now but I still get chasing and nipping at feeding time. I tried two bowls but that didn’t make a difference as once food is down they are totally fine to eat from the same bowl and side by side etc it’s just when I walk in the room at feeding time. All I’ve been able to do is just get the food in as soon as possible to minimise how long the chasing occurs it makes feeding time stressful but so far hasn’t caused any major issues!
A

I have a trio, and they all get super excited over tea time too. When they first were bonding they had one shared bowl, and there was always nipping. Once they moved into their permanent home, they all had their own bowls, after a few days the nipping stopped. Hopefully this helps!
You must log in or register to reply here.
Share:
Facebook Twitter Reddit Pinterest Tumblr WhatsApp Email Link