Yesterday I clipped Theo's nails and gave him a heath check just to make sure he is okay. Everything was fine, but today he is acting really territorial and had one poop that looked like 2 combined. Last night there was a weird blob of what looked like poop on the floor of his hutch, but I didn't think it was poop. Now I'm wondering if it was poop and I should have been more concerned. I felt his other fresh poops and they are normal. He is still eating, drinking, pooping normal poops, and playing. But he won't let me pet him and he keeps trying to bite me! He has never bit me before or even tried too! Please help! I can send pictures if you need them.

I'm a little concerned it might be GI stasis. He ate some of his pellets, but now is just sitting on his towel all hunched up. He is scaring me, please help! Should I take him to the vet?
Here are some pictures: The thing on the plate was the watery poop, but it is now hardened. It was very mushy last night. 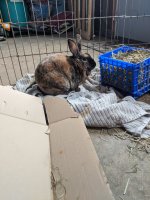 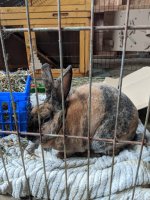 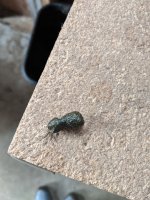 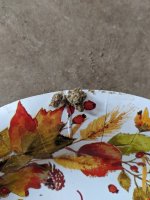 We have scheduled an appointment for today at 3:30. I'm hoping he will be okay until then.

Hurry please take him to the vet ASAP because he may not make it. He might have a blockage in his intestines or G.I. stasis. Did you let the vet know, is there an emergency vet that you can take him to? I had a rabbit dying exactly this way. Can you make sure that you get “Critical Care” as well as a has water by syringe? The rabbit is in pain when he is hunched over like that. I am not trying to scare you but it is very serious.

laranhomes said:
Hurry please take him to the vet ASAP because he may not make it. He might have a blockage in his intestines or G.I. stasis. Did you let the vet know, is there an emergency vet that you can take him to? I had a rabbit dying exactly this way. Can you make sure that you get “Critical Care” as well as a has water by syringe? The rabbit is in pain when he is hunched over like that. I am not trying to scare you but it is very serious.
Click to expand...

Thanks for your response! He has eaten a piece of timothy hay, the rest of his pellets, and a bit of salad that came in his happy bunny club box. I have cleaned his litter box so I can see his fresh poops. He is still moving around but is definitely in pain. Do you think I stressed him out yesterday when I clipped his nails? I'm going to massage his belly, but he is mad at me for clipping his nails yesterday. There is no emergency vet that I could take him to, but he will be going to a vet at 3:30. I will make sure to get Critical Care, and I already have a syringe with water beside him.
Last edited: Jan 29, 2020

Maybe he could be, was it the first time you clipped his nails?

I have clipped his nails before, but not often. He doesn't like me holding him or touching his feet.

Please keep us posted on his treatment. Good luck

I will! Thanks again for your answers!

Update:
He has not been to the vet yet because it is 12:10 and the appointment is at 3:30. I have been trying to get him to eat and so far he has just barely. I keep smacking him with hay to bother him and possibly get him to eat it. I tried to massage his belly with his butt in the air, but he hated it even though I could tell he felt better after. I went into the kitchen get him some pineapple juice and when I went back to him he ran away (good sign)! He ran upstairs in his hutch and I heard the sound of little poops. I looked in his litter box and there was a little pile of perfectly good healthy poops, along with some pee. I still gave him the pineapple juice which he liked, and I tried to massage his belly but he wouldn't let me. I'm going to see how he does and if he improves a ton I don't think I will take him to the vet today, but if he relapses I will take him ASAP.

So we took him to the vet and he did not have Gi stasis yet. It was where his belly was full and not pushing the food out. They gave me some medicine and said that if he did not get better in 24-48 hours to come by and get some critical care. I think he will be fine. He is acting normal and is just not eating normal yet.

Hope he will be okay. Good luck

So Theo has been doing okay. He is eating and drinking, but still not pooping as much as he should be. I have been giving him Reglan 3 times a day along with some pineapple juice. He keeps going through phases where he is fine and then about 4 hours later he has hunched up again but still eating. Should I be giving him pineapple juice? Today is the last day of medicine, should I get more? He just is still acting sick. I don't know what to do, please help.
Thanks in advance.

Hi, I am not familiar with Reglan but my rabbit had same problem and we managed without any medicine as I ordered online but got only after weekend when it was all in past.
What you can do, belly massage for 10 mins a few times a day, make him moving more, I brewed fennel seeds and gave him instead of gas drops about one teaspoon a few times a day, you can use dill seeds as well, brew for 15 mins and give without seeds, no sugar too.

Here's a video how to do a belly massage, hope he'll feel better soon. My rabbit was very new to me and had horrible very tiny poos and no poos at all, something like what you have in first photo too, he recovered after one week or so, now he's very good. I adopted him around 10 December and he looked very fat I thought he's just fat but it was his stomach and he was in pain. I don't know maybe his owner didn't notice but she didn't say anything so I only noticed in a few hours that there's no poos and then very tiny poos when I realised he's sick I did some research and it was Friday evening so we had no medicine nothing but fennel tea and massages worked very well, also you need to make him running/exercising as much as possible so it would help to make his inside moving too.

Here's my thread I've posted some links there as I was researching might be useful to you too https://www.rabbitsonline.net/threads/new-rabbit-fat-and-tiny-poos.96554/

Theo has been getting better slowly, but this morning he had some more weirdly shaped poops in his litter box. There were only a few, and the rest were normal. I think he just ingested a lot of fur and it has clogged him up, because when I split the poops open all of them seemed to be stuck together because of fur. He has been getting some pineapple and a little bit of apple, a papaya enzyme, along with lettuce and cilantro. All of the fruit/veggies have been sprinkled with Critical Care. He does not have a poopy butt. He is eating tons of Timothy hay, and pooping normally, but he is still sitting hunched up (no tooth grinding). Any help is appreciated! 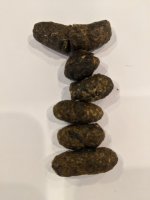 Pineapple juice does not work and can do more harm than good. The best (and probably only) things you can do are brushing often, twice a day when moulting, make sure bunny is hydrated and encourage lots and lots of hay eating.

Location
Mostly freezing my butt off with Stella... haha

Thanks! He is almost back to pooping normally and has been eating so much hay! He is still sitting hunched up, but I have not heard tooth grinding. All of his poops have been normal and had some fur in them so I'm hoping he is passing all that fur that has been filling him up. I just got some Gas Drops because the store has been out, would it hurt to give him some of those? And how much of it?

Location
Mostly freezing my butt off with Stella... haha