It’s my first time officially fostering anything!
I was assigned a notorious un-adoptable mini rex who has been returned twice for aggression and misbehavior. He’s been so hard to keep in a home, the rescue has given up on finding him one. They only fostered him out because they have to empty the facility for the summer due to air conditioning issues. They warned me that he’s a little terror in a house setting, so that’s what I brought him home expecting: a little monster.
What I got was a charming little best friend who hangs out on the bed with me, greets me when I come home from work, binkies onto my lap, sits on my pillow, and has been nothing but a joy to have around.
Everyone wants me to keep him, but it breaks my heart to say I can’t... I’ll be moving after he goes back to the rescue. He’s not rabbit friendly and I couldn’t keep him safely away from Pup and Muffin when I go back to my mom’s house. Not to mention, i stead of one chihuahua, my mom now has three dogs including a large lab mix who evidently hates rabbits.
If I can, I’d love to try to adopt this little guy when I get my own place again. Or foster-to-adopt to see how he does. After losing Mrs Brown, this puny rabbit has brought so much love back into my life. I’ve also never had a rex before! He doesn’t care much for being pet - on his back is ok, no thanks on the face, and his ears are off limits - but it’s ok and im respectful of his boundaries. Almost wonder if that contributed to why he got nasty at his other homes; people trying to touch him too much because he’s such a soft and cute bunny and he didn’t like it. 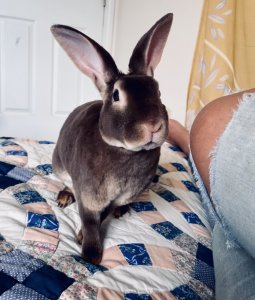 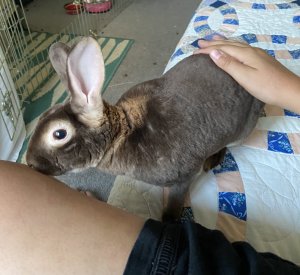 I wonder with how head sensitive he sounds, if he may have been picked up by his ears earlier in his life at some point. That could certainly be a reason why he would react negatively now, even to just head rubs, which most rabbits prefer and love. I'll bet that as he is with you longer and his trust grows, he may at some point start accepting gentle head rubs.

Just goes to show, sometimes it's about finding the right person for a 'troubled' rabbit. I'm glad he's finally with someone who understands him and who he is comfortable with and feels safe with. I hope something works out where he'll be able to end up back with you, or if not, then to find someone as in tune and understanding as you.

That could be possible! It’s theorized that he came from a shady backyard breeding program because two more mini rexes were found near where he was caught. All strays in the same area. All head sensitive too! He’ll tolerate me petting his feet more than he tolerates me touching his head. I thought he didn’t like his cheeks touched because of that long scar he has under his eye. Either way, I love him all the same! He’s affectionate in his own way, warming up to me more every day and I’ve only had him a week!
I have trouble imagining what this little darling was like in his other homes and what would make him act up so much that they’d return him twice.

Oh WOW what a handsome man!!!

I just wanted to say that my boy Lucas had much the same story: dumped twice, and returned twice from adoptions. He has his forever home now, though!

I think it's sad what people call "aggression" and "misbehavior" is just them not understanding rabbits. Lucas was returned for the same reasons, and he is the sweetest little gentleman!

It's a shame he won't be able to move with you, but you're giving what you can, when you can! You can at least show your extended guest some love in the meantime!

I wasn’t able to spend much time with my fuzzy little guests this past week because of family obligations, but Southy was nonetheless happy to see me and again making me wonder how anyone brought out aggressive or problematic behavior in this little creature.
he’s gotten bolder, jumping on me and over me and coming to me when i call him. He’s also letting me touch his head more, still iffy about the ears, but he’ll let me rub his cheek or between his eyes. I don’t know what he was like in the rescue so I don’t know if this is typical of him or if I’m making improvements with him, but it feels like a personal accomplishment and a sizable step in the right direction! 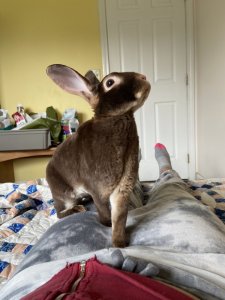 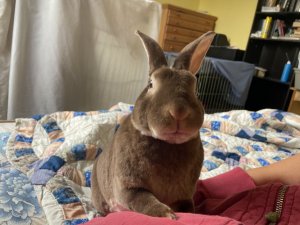 He's quite the photogenic boy! Love him!