Well, I guess that's it then. They're bonded. It's so fun and so cute, to see Storm so happy with his new friend.

Yeah. In spring, I thought that i would be rebonding the boys this time. But nope, i'd managed to go through the whole ordeal of scouting, buying, fixing, settling and then bonding a completely new bun to Storm.
Although this time it was genuinely more fun than worry, i'd rather not do it again for at least six years. They've been going so strong and i want to keep it that way, only if i could get my mum to understand, but nope, she's out of this world on that one for half of the time.

Now Storm can have a sleeping playmate without bars between the two. Congrats on the successful bonding! <3

It's so relieving to see him perked up and chill again. No sign of the sluggish depressed dude i saw two months ago. I wonder if losing Lümi made him just a little more accepting of his new partner, or if they just clicked a bit better. It was most likely a little bit of both, i think. Either way, now there's another happy bunny duo in the world. I'm so excited to get them to winter vaccine in one carrier! Here's to hoping they stay that way.

I dismantled Iris' home in the middle of the week just so that mum couldn't tell me to "separate them". She is still worried that the "royal pair" as i like to refer to them, will break out in a fight. It's unlikely that it'll ever happen so i did a huge cleaning spree that day. I sure did miss my floor space without knowing. Yes, i still get a little nervous tingle when i hear sudden obnoxiously loud noises from them but it's usually them just zooming around.
I wanted to make a tote bag hayrack for the pair so dad bought a big jute tote for me. I stuffed the modified tote with hay and three days later, today, i had to take it away and create a gridded rack instead. I was hoping that since they didn't chew at fabrics they would not destroy the tote but oh well, wishful thinking on my end.
We've also let them roam around in different rooms and they've had no issues but i still habe no idea why Storm would jump 80cm from the floor onto the countertop when there's nothing there.
All in all, i've no doubt the royality is absolutely bonded now. I'm dreading the time we have to move back to the tiny apartment but that, hopefully, won't be until early october and won't last longer than mid-may the new season.
I'm also excited to have them together in one carrier when it's time to go though. Also, for the myxo vaccine in december. I bet that our local clinic has never seen bonded bunnies come together for vacci's. (Storm and Lümi went at the same time in spring, one in the carrier and Lümi in my lap, unbonded)

@Catlyn, I'm gone for a month and when I get back you have two bonded rabbits?!? No way! I'm so happy for you! I would try to read through all the threads I missed, but since I don't have much time I at least need a summary of who this new bunny is (and of course pictures of both bunnies)!

Sure! I don't have much time to write now either, so i'll try to keep it short and simple.
Ever since Lümi died, Storm had been seriously depressed so i slowly persuaded dad to let me try find Storm a new bondmate. Asked for advice on how to do it safely under my circumstances. Thought about taking him on a date to ywo local breeders but their buns were only 3m-o. Still, had to go with the scout-buy-fix-heal-bond kinda way. My friend helped me look online for buns and we found one lady who had an accidental litter in december, and her litter had one girl left. She was totally okay with us coming to pick her up the next day.
So we brought the sassy stomper home, got her fixed about three days later and named her Iris. Found out that only 6m-o girls can also be extremely near to developing cancer. I took my sweet time letting them be neighbours but not dating.
A little over a month had passed from her spay when i finally decided to date them together. By the end of the first session Iris had already groomed Storm. It made for a wonderful smooth bonding that lasted only 5 days and after that i was confident they would stay together. They still are.
I'll have to leave pics for later cuz i gtg asap.

Didn't get too many pics of their bonding process. They're not that photogenic. 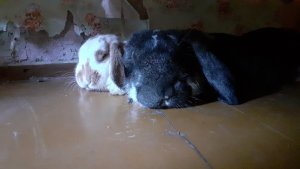 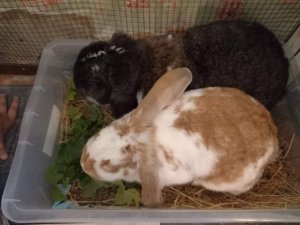 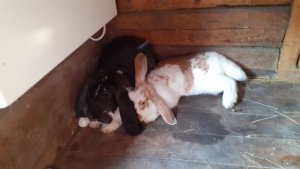 So yes, Iris is a broken orange up-lop mix born sometime last december. I'd like to assume at the end, like a christmas present. The owner lady did say that she had to bring that momma with her kits indoors because of cold. So she is currently almost 9 months old. She's the only girl and the oldest-obtained bun. She's almost the same weight as Lümi was, 3.6kg, but she looks smaller. At least her bodily datios are more balanced and she doesnt have that obvious "twig legs".
She was super sassy at first, she boxed, grunted and dug almost non-stop. Once she was done with the tantrum the rest of the 60km ride she was chill. The lady doesn't mind car rides. She was super shy and would zoom away in a flash.
Now she's more used to us, likes to be pet, likes her hay, loves Storm and waking me up in the middle of the night. 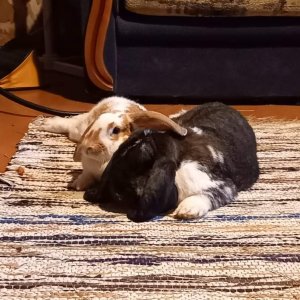 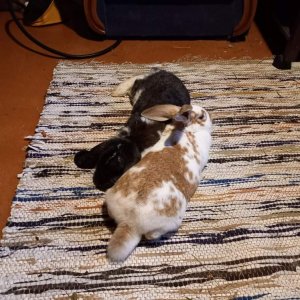 I think that i'm ready to change my pfp as well... I like to change it according to what buns reside with me, and i think.. It's about time that i change it to the new pairing, i'd already skipped changing it back when Lümi went.

I have to admit that it's super hard to get those two to stay still when i try to snag a pic, and i need to miraculously find a light in which Storm would be equally well-visible. The minor downside of having ying-yang colour duos... Any tips?