About your bunnies :D

LOL That is his bunny buggy. He's too heavy to put in most laps, expecially the elderly, so he'll need to be on a good chair level. We're having nice weather this week so I plan to take him out for some pet store practice runs.

whatever4andnomore said:
Definately a lionhead! But he also looks like he has the coloring of a dwarf hotot! Very handsome lil guy!
Click to expand...

Thank you! Yes he does sort of look like a dwarf hotot! He has a couple of black spots on his back too.

Channahs said:
LOL That is his bunny buggy. He's too heavy to put in most laps, expecially the elderly, so he'll need to be on a good chair level. We're having nice weather this week so I plan to take him out for some pet store practice runs.
Click to expand...

The bunny buggy is awesome!! I am sure Barry will be getting a lot of attention on the way to the pet store

These are my 3 adorable buns, Gracie (brown/grey), Jamie (black/brown), and Theo (white). I've had them for almost a year, so they are around that age, as I got them as babies.
I took in Gracie and Jamie from a friend who received 3 bunnies for her birthday but had no clue how to take care of them and wasn't even allowed to have any pets. They were only being fed carrots and pellets, and we're living in a carrying cage... And she had to get rid of them; however, no one would take them and she couldn't bring them back to the "pet store" as we live in china and communicating would be ridiculous and complicated. Additionally, one of the 3 rabbits was ill, he had a huge, what I believe to be, an abscess, so they'd just kill him and the other two were most likely meant to be eaten... Talk about cruel. I couldn't let anything happen to these babies so I took them in without having any knowledge of how to care for rabbits, but I did my research and took the sick one to the single English speaking and qualified vet here who has never treated rabbits before... And I gave him medicine, so he got a lot better and the large lump disappeared, so I thought he was okay. After reading online that bunnies should have companions, I went out and bought another dwarf bunny so that he'd have a friend, since the other two were very close and not dwarfs. However, the sick one suddenly got diarrhea and passed away the same night, absolutely awful and upsetting. So I was left with 3 bunnies and no experience... But here they are! And now, I feel like I know everything there is to know about bunnies after reading about every single site online.
Last edited: Jan 21, 2015

Sweet babies! And they're all so different!

Location
Some where in the U.S.A.

Hey, guys for any of the future bunny posts that I forgot to respond to from so long ago. I apologize for not checking in sooner, but all of your bun buns are lovely and also I believe my Rosemary was a Dutch. The pet shop I bought her from more than likely didn't know anything about her when they said she was a Lionhead. Also she just passed away on September 8th, 2018. So you guys may wanna go check out the "Rainbow Bridge" posts.

Have a nice day.

mine are mini lops..... their names are mocha (female) and echo (male). they are both so lovable and nice... they are going to be show bunnies... love to show them off

This is Sadie, my netherland siamese point. My husband got her for me a year and a half ago as a surprise. We'd just moved into our new house, and I remarked how much I missed having a rabbit (had my last one before her in 2015). Shortly after a lady showed up with Sadie and was told 'surprise' by my husband. I've never had a small rabbit before, and a Netherland wasn't my first idea to get. But I really like her, and she is such a little comedian. In the pic, shes playing with her blanket on the couch. I let her out in the morning, and she race about like a little greyhound. She's best friends with my female cat, and they look out the screen door together. Sadie makes aggressive sounds at the wild rabbits that hop by. Sadie is also the first rabbit familiar, and only bun to successfully fly on a witches broomstick. 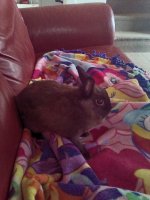 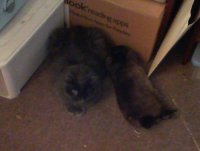 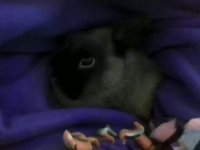