Lümi has a fat belly that is a bit stiff. He won't let me massage it but he's active, drinking water too. I made him move around and move his belly when he lets me, from which low gurgles came. I haven't heard him teeth noising yet. Now he produced some wonky-looking poop without any visible mucus in it. They are, however, darker and softer to the touch than his normal ones.
His diet consists of unlimited hay and water, dandelion greens, dill and some lone lettuces, and a small handful of burgess excel adult mint pellets. He's 6months old.

Has his hay consumption decreased? How else would i help him solve the belly issue? The vet's office is closed for today already.
The middlemost poop is one of his more normal ones.

He is eating his cecos but he gave me a soft grind when i moved his belly around?

My bunny went through what sounds your bunny’s going through we had just driven 4 hours to get back home from vacation
He wasn’t eating that much, his poo has small and kind of deformed, but he did take treats, but wasn’t moving around that much. I massaged his belly for like an hour, did not leave him for like 6 hours (cause I was paranoid),

, made him move around, and kind of force fed him hay.

That's how he's sitting now- loafy and ears pinned back. He doesn't want to hold them loppity at all. Any thoughts?

*excuse us for his location, couch surrojnded by miscellaneous fluff...

Do. you have critical care I would give him Some of that

No i don't have that, our stores don't sell it. 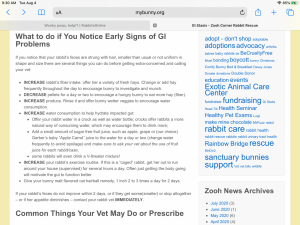 I left the hay bag down on the floor for him and he's tucked his head in it, munching!
So i don't think that a crit-care is needed. Thanks for the support though!

My rabbit does that to
I think it’s cute

Yeah now he's on and off on moving and not, eating and not. I'll try give him a ml of simethicobe to see how it goes.