What is Frosted Cream Harlequin?

My doe, Beatrix, has a long line on her pedigree of Frosted Cream Harlequins. She, herself, is a Chesnut VM. But definitely carries the ej gene as she always has at least one harlequin baby in her litters even though the dad doesn't carry it. Basically, my question is how do you get a Frosted Cream Harlequin? The breeder said for a while no one put the harlequin base color on their pedigrees. She started adding the frosted cream because it is distinct. I'm curious how you tell the difference between and Frosted Cream and a normal harlequin?

There are lots of Vienna Marks and Bews on her pedigree. 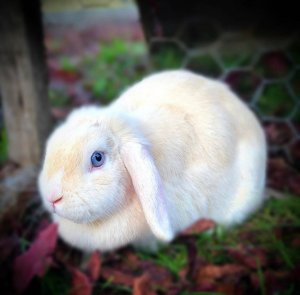 I don't know the answer to your question but I have to say, these bunnies are absolutely beautiful!

No such thing as a frosted cream harlequin. Sounds like the buyer was adding words to try and make her rabbits seem more unique.
The harlequin base color comes from the black part, not from the orange part. For example, black harlequin, blue harlequin, chocolate harlequin, etc. You could put japanese harlequin (eg black japanese harlequin) to differentiate between magpie. But nobody tells apart the harlequin's base color by the pheomelanin part. And "frosting" is only something that shows up in certain dilute colored kits, a paleness to the tips of their coat, which goes away when they molt out of the baby coat. There is a color called frosted pearl, and one called frosty, but those are chinchilla-based colors, so they can never have cream in them.

I thought it was a little odd as I have never heard of a "Frosted" Cream Harlequin before. Plus, she said it was very distinct and I couldn't tell any difference between Cream and Frosted Cream, lol. It all makes sense now, thanks for helping me out in my cluelessness about rabbit colors.

Is there such thing as a Cream Harlequin or is it the same as a Blue/Fawn Harlequin? Beatrix has had a few babies who look like creams or lighter with little grey/blue spots when bred with a solid Blue Point.

Beatrix's babies: Color? The two with a white background had very, very subtle markings (just a spot on the tail and a splotch on the ear). While the one with a wood background has more markings around its ears and face. 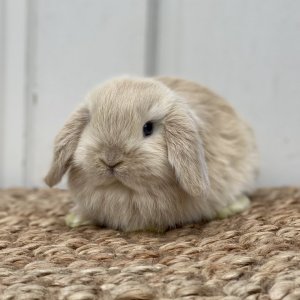 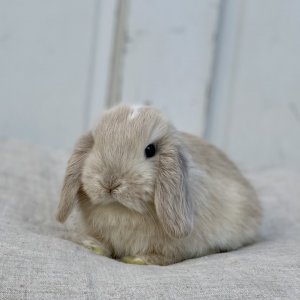