What breed is my bunny? A Netherland dwarf? 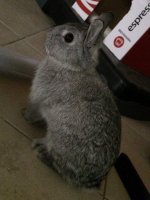 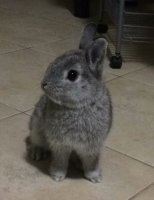 Its my first post here HII
My question is - my bunny (BunBun, male, four months old, weighs 750 grams), as I was told when I got him, is supposed to be a netherland dwarf, but from the research I’ve done he doesn’t look exactly like one, (which I have no problem with because he’s the cutest little angel and I love him to death) he has slightly longer and pointier ears and his head isnt as bulky, plus his head is kinda small compared to this body, and I can’t figure out his breed; so I was hoping someone might know or have a better guess than I do.
OH also wondering how big he’s gonna get since he’s really tiny right now and I have no idea
Thank you in advance!

He could be pure Netherland Dwarf, just not as close to the show standard as most. That would be my guess because I've seen plenty of purebreds who look more like him, and he seems to be the same weight you would expect from a Netherland Dwarf. If not, than probably a Netherland Dwarf cross. Probably won't get a whole lot bigger, maybe around 1 kg.

Remember when my pure breed netherland buck was 4 months he’s head was tiny compared to the body but now it’s better proportion after a year. It’s also one of the ugly periods, when the rabbit get is molting losing the baby fur and changing to adult fur.

My rabbit is 700 grams while his brother from same batch is near 2 kg. 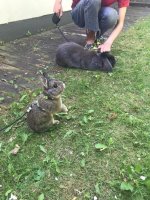