View these X-RAYS? Funny sounds while breathing after choking incident. 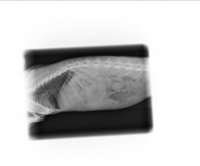 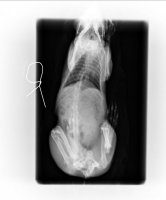 Our girl choked on pellets on Jan 2, 2019. She sounded like she was vomiting but we knew rabbits don't really do that. She hid behind the couch then was running frantically around, putting her nose in the air, pawing at her nose and face, snotting with lots of phlegm bubbling from her nose.
We quickly grabbed her, wiped what we could off, googled bunny choking and as carefully as we could performed the bunny heimlich.

She was still bubbling at her nose but less so and her lips appeared to be somewhat bluish. The whole ordeal lasted about 15 minutes then a 12 minute ride to the emergency vet and 15 mins in the waiting room for triage. We were unable to see the exotic vet as they were not on duty.

Antibiotics were prescribed for 7 days (enrofloxacin). Meloxicam for 3 days.
Brought her home and she wasn't really herself the first few days, which was to be expected after what I can imagine was a very traumatic experience for her. However, she is eating well. Not as much hay as she usually eats, but is interested in fresh greens, and pellets given one by one.

She is active and roaming around the house as usual, grooming and being groomed by her partner bun.
Poops were smaller than normal but plentiful. Shes resting and drinking well.

I think we're clear of any possible gi issues.

When she's resting however, she twitches and clicks and squeaks. Sometimes sneezing or she makes kind of like a coughing sound. It doesn't appear as though she's in pain (maybe thanks to pain meds) but she's lounging as usual.

We have a humidifier going and the heat up to keep the temp up in the apartment.

Took her to the vet again on Jan 5 and got x rays. The vet is supposed to be savvy but he said he never has had a case of possible pneumonia in rabbits. She didn't make any clicking sounds while at the vet so he couldn't see that in person.
He prescribed more Meloxicam and 2 weeks of chlor palm antibiotics.

Any one experience this before after a choking incident? She seems in really good spirits but the squeaking is worrisome.

Thank you for reading!

I've never personally experienced this sort of thing and I'm hardly a radiologist, but in the second x-ray it looks to me like there's a cloudy area in the upper right lobe of the lungs consistent with what you'd expect with a case of pneumonia. This is from a site on human medicine but is general enough that it should translate pretty directly to rabbits:

Classically pneumonia is diagnosed in one of two ways: X-ray and clinical exam. Pneumonia shows up on X-ray as an area of opaque white in the lung fields, which normally look black and filled with air. There’s some subtlety in making the diagnosis on X-ray, which is of course why we have RADIOLOGISTS. They are trained to notice the details, but most good general clinicians can diagnose the majority of pneumonias on X-ray. That often gets put together with the clinical exam, which sounds like crackle sounds in the lungs instead of the clear movement of air on inhalation and exhalation.
Click to expand...

There are three main types/causes of pneumonia - bacterial and viral pneumonia are directly caused by a communicable germ of some sort, whereas aspiration pneumonia is caused when foreign material enters the lungs. Aspiration is caused by choking (something "goes down the wrong pipe") or inhaling (the reason you *always* squirt meds/food/liquid in from the side of the mouth rather than the front when syringing something into an animal). [Side fact: The fear of vomiting from anesthesia and then aspirating some of the vomit is why cats and dogs have to be fasted before surgery and why it's ok that you can't fast a rabbit before surgery (since they're unable to vomit).] In many cases when a small amount of something accidentally enters the lungs, it can be coughed out before it causes a problem (in people, anyway)... but in other cases, it gets stuck in there and collects bacteria, resulting in a pneumonia infection that is typically treated with antibiotics.

By the sounds of it, your vet has determined (or at least suspects) aspiration pneumonia. It's very important to stay on top of the antibiotics and finish the ENTIRE course; also, a follow-up visit with your vet when the antibiotics are done is crucial to make sure the infection is 100% cleared (not just dormant/hiding).

Antibiotics are rough on one's body, particularly the digestive system, because they don't just kill the bad bacteria - they can take out too much of the "good" stuff as well. It's recommended to always give your pets (and humans, for that matter) probiotics in addition to antibiotics, especially when antibiotics are given for a longer time frame than the usual 10 days or so. Some vets, feed stores and/or pet stores carry pet probiotics (BeneBac is a good/very common brand and they have a small animal formula) and it can be purchased from many online retailers. Be sure to give the probiotics at least 2-3 hours either before or after the antibiotic to prevent it from killing off some of the good bacteria in the probiotic. While you may seem clear of GI issues at the moment, the antibiotic has the potential to upset her digestive system and cause her to stop eating later - probiotics help counter this risk.

Not sure how to edit my original thread but have a look at this video. It's the lil white one.