Unsure if rabbit is pregnant

My rabbit is a mini lop, almost 2 years old. She recently escaped our yard and ran off into the bush, where we found her an hour later. She knows wild rabbits in the area and was pregnant about 2 months ago (the babies died as we did not know she was pregnant and we were on holiday), I tried palpating her (it has been 14 days) and I can't feel anything, although I have watched many videos on how to palpate a rabbit. I was almost certain she was pregnant, and last time I didn't feel anything unusual about her.

Any tips or help would be appreciated regarding testing if she is pregnant and other stories about unknown pregnancies, thanks.
E

Why have you not spayed her if she escapes (seemingly often) and knows wild rabbits?
If your rabbits are escaping that regularly you need to keep a better eye on them or fix their enclosure.

You need to get her neutered. Theres enough rabbits in the world with no homes.

The only other way I could think of other than an vet trip and palpatating her is weighing her every day and watching for weight increase.

My female rabbit lost her first babies, which is not uncommon she had 4 that were not fully formed. I believe it was just because it was her first litter. We also didn't know for sure if she was or not, she just looked a tiny bit bigger.

She became pregnant again. She was visibly larger and you could definitely tell she was slower to moving around and seemed a lot heavier. When I noticed her looking bigger I started to feel around her belly as close as she would let me while I petted her, and I could count 6 grape-sized bumps (or lumps) around her belly. I didn't push any on her at all cause I'm afraid it could hurt the babies. I just petted her slowly to see if I could feel anything. Sometimes if you watch really closely you can even see the babies kick, it will look like her belly just twitched. My girl ended up having 11! Unfirtunatly two of them died within their first 3 -4 days, this is also not uncommon.

Also it is safe to handle the babies, she wont abandon them. In fact, it's absolutely important that you count them all and keep track of them and make sure they all get enough milk.

They typically feed 1-2 times a day. The momma bunny will stand over top of them and the babies will try to find her nipples to get milk. It usually only takes like 10-15 minutes.

Don't be alarmed if the momma bunny doesn't hang around the nest hardly ever. This is what they are designed to do because adult rabbits have a scent that predatory animal can smell but the babies dont have the same smell. It's in their nature to try not to be around their babies as much as possible because they know they dont want any predators to find their babies. This is also why rabbits tend to jump out in front of cars on the roadway a lot, they hear something coming that they think is a predator and jump out away from their nest to try to draw the predators away from their baby nest.

It would be very very good to make sure you keep a rabbit nursing kit (you can usually get them pretty cheap under $15 at a place similar to Tractor Supply or Rural King). They will say powdered goats milk on the packet but shows it's for nursing baby rabbits and other small rodents. They worked excellent for me. It will take a while for the babies to learn how to be fed from a dropper but it can save their lives if you keep trying. Be sure to not get any milk in their noses when feeding them as much as possible cause you dont want to cause them not to be able to breathe. It would be a good idea to watch a YouTube video on how to feed baby rabbits with a nursing dropper.

Be sure to plan ahead with having the nursing kit on hand and follow the instructions it provides. This saved at least 3 of my baby rabbits and they all grew up to be happy healthy bunnies. Where my female had 11 (2 died soon after) she had a lot of babies to try to feed and I think she might have had trouble producing enough milk for all of them so it helped out big time. If you have to do that, make sure all of their bellies look round and plump. If they don't, then feed them twice a day (once in the morning and once at night) until they look plump.

When she is close (within 3 days) to having her babies she will pull out a ton of fur out of her dewlap area (her "double chin") and line the spot where she plans to have them. You might also catch her packing a bunch of straw or hay in her mouth to that spot as well. Make sure you provide some kind of nesting box as soon as you think she might be pregnant cause she will make use of it. It needs to be something the babies can't climb out of and get stuck and die. They do wiggle a lot when they think it's feeding time and can wander off away from the nest and die if you're not careful.

They ESPECIALLY need somewhere warm in this winter weather. My female had hers last March in very cold weather. I had an outdoor pet heating pad I bought from Amazon.com that cost about $35 and had it on the bottom of her nesting box and made sure there was a bunch of straw and a small blanket on top of the heat pad so the babies wouldn't be sitting directly on the heat pad. They stayed good and cozy for the remainder of the bad weather that way.

Theis was her set up when she had babies in her hutch. 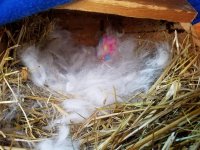 Euph said:
Why have you not spayed her if she escapes (seemingly often) and knows wild rabbits?
If your rabbits are escaping that regularly you need to keep a better eye on them or fix their enclosure.

You need to get her neutered. Theres enough rabbits in the world with no homes.

The only other way I could think of other than an vet trip and palpatating her is weighing her every day and watching for weight increase.

I heard that there is a risk that the rabbit could die if you spay it. I'm not sure if that's true but I don't really want to risk it
E

Bunny38 said:
I heard that there is a risk that the rabbit could die if you spay it. I'm not sure if that's true but I don't really want to risk it
Click to expand...

Have you done no research? Your rabbit is going to get cancer, an unspayed female has a 60 - 80% chance of uterine cancer over the age of 3.
You need to get her spayed, there's always risks.

Like I said, theres enough homless rabbits in the world getting put down every day becasue none adopts them. We dont need more baby rabbits taking up loving homes if you can help it and you CAN.

There is of course a risk with anaesthetic, as there is for any animal, but the risk of death during spay by a rabbit-savvy vet is significantly lower than the risk of uterine cancer. It also will help with behaviour and make her easier to litter train, and less territorial, and also of course prevent unwanted pregnancies! Not only does an unwanted pregnancy produce babies that you have to care for and find homes for, it also puts a huge amount of stress on your bun, especially if you aren’t an experienced breeder so don’t know how to feed her and care for her properly through pregnancy and lactation.
As for is she pregnant now... I wouldn’t try palpating unless you know what you are doing as you risk aborting the kits if you press too hard. If you want to know for sure, take her to a vet, if not then you’ll just have to provide her with a nest box and wait!
B

Thanks for all the advice, I knew there was a high risk of cancer but wasn't sure about risk with spaying. I will get her spayed as soon as possible.

Just make sure you look around to find a vet that is good with rabbits, find yourself a good exotics vet and the risk will be much lower.
C

Domesticated rabbits cannot mate with true wild rabbits. Now, if you have domestic wild rabbits, that would be an issue.

I’m pretty sure they can in the Europe, and Australia where OP is from, as the wild rabbits here are the European rabbit from which domestic rabbits descend, as opposed to the cottontails you have in the US.
C