Junkie2 did you make one of these litter boxes?

Runestonez said:
LOL
I do sell them...but they are so bulky the shipping is killer!
I sent one to Mrs. PBJ in Galveston...shipping was $25...I guess it depends how badly you really want one! LOL

I will gladly buy three of them and don't care how much shipping is. I've broken a rib and think I have a hairline fracture in another and can't keep cleaning up after my buns tossing litter on the floor. Please send me a PM and hopefully we can work something out!

Soooska dear...you do realize who I am off the board right?!
LOL
If you are going to the All About Pets Show in Mississauga this year I can whip one up for you!

Actually if there was enough interest in the litterboxes I could make up extra fully assembled litterboxes for anyone interested. The profit from sales would go to my rabbit organization OREO (Ontario Rabbit Education Organization).

Hello all...I haven't been on RO in a longtime.
Life intrudes, etc, etc...
I do run a rabbit organization in Ontario and I am always busy writing, trying to find new toys for bunns...and I also do wildlife rehabilitation on the side! Busy chick!
I haven't been receiving updates or PM's for awhile...I finally got one tonight and was shocked! So after updating my subscriptions...I am back again!

I am glad you guys are able to use my design for the litterbox! I still use these for my kids. I haven't found anything that works better!
I have tweaked my boxes a bit. I fitted the grating better so I was able to leave the feet off (except for bigger bunns...still need the extra support).
Different colour litterboxes....different colour hay racks.

This year our organization will also be bringing NIC cage accessories to the petshow. I have been working with a lovely lady out of PA that has been sewing some nice soft fleecy self covers for NIC cages. Custom made to fit whatever size/shape NIC cage you may have. Reversible design, and urine absorbant pads to keep bunn feet dry and clean. We are tweeking our design...but they should be ready to roll before Easter. Chloroplast shelf supports are available too!

OK...back to the drawing board!
Sorry again for being MIA!
It looks like you guys have managed to network and help one another out!
Fantastic! This is what I had always intended for the litterboxes!

I just have to try making one of these! My bunny constantly has hay and poo and litter scattered over his cage within about 2 hours of changing his litter he is just so messy! I'm constantly on cleaning duty and going through hay like crazy since he won't touch any that has poo in it (don't blame him). Thanks so much for posting the guide on making it and the pictures make it so simple to understand. You are great!
A

Sorry for bumping an ancient post but found this online and looks like it may be the solution to my problem.

My rabbit rolo is constantly weeing in his hay and just making a general mess with it.

I would love to make one of these however none of the images seem to display anymore I don't suppose anyone has the images saved or knows where I could view them?

Or if anyone has any other good suggestions for a good litter box with a hay rack it would be much appreciated!

It is pretty normal for a rabbit to pee and poo while eating. It is a natural behavior. Years ago I had been encouraged by more experienced rabbit owners to top bunny's litter with hay. I didn't think that would be right. But finally I gave in to their experience and haven't looked back since.

I only feed my rabbits their hay in their large litter box. I put fresh hay on top twice per day. It is the best system, in my opinion. With 2 rabbits, I could go 4 days between cleaning litter box. With one rabbit, I can go a week with absolutely no odor whatsoever.

It is so simple and seems to be the least messy. Here is a photo of what I do: 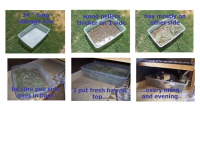 And just for better perspective, this shows the cage further out. (I keep the cage door open all day long.)

Runestonez said:
Step by step instructions to constructing a Stormhaven Litterbox!
Beginning with the Hay Bin!

2. Do NOT try to bend across the weld joint...the NIC will snap everytime! If this happens it cannot be used without running the risk of your bunn injuring itself!
Locate the weld joint and be sure it is either at the top or bottom of the hay bin...NOT on the sides!

3. You should be bending the NIC on the 3rd row of squares from the bottom and again on the 3rd row from the top to form the "U" shape.
Use a marker a make a tick on each edge where you are bending.

4. Since I bend quite a few at a time I made a bending jig out of old 6x6 lumber...the easiest way to bend them is to find someway to secure them and apply body weight to arc them over to the angle you want.
In this case I insert it up to the ticks I made in the jig.

5. Using force and body weight I lean on the NIC and begin to gradually bend the NIC.

7. Once the first bend is made reverse the NIC and begin the second bend.

8. It should look like this when it is finished being bent.

9. Mark out the opening for the hay bin. It can be one large opening but I suggest leaving one row of squares in the middle and one row on either end to keep bunny from deciding the hay bin is a nice place to sleep!

10. Next step is to cut out the wires to form the opening...I suggest getting someone with a Dremel to help you...they CAN be cut by hand...but I seriously advise against it unless you have ALOT of time on your hands!
I use a fiberglass reinforced cutting disc to cut the wires and a grinding stone to polish the cuts! It is VERY important to make sure there are no metal burrs or weld flash left when you are done...they can be very sharp and bunn may be injured! So be sure to check thoroughly before moving to the next step!

11. Once you are sure the hay bin is smooth and clean...apply a light coat of acrylic paint to any cut or damaged areas...this will keep it from rusting over time. (I know the thought of paint may make a few people nervous...but I used to make these where I worked and when we had blemishes from the oven we used acrylic paint to cover any undesirable marks...and the coating is basically an acrylic coating...it will be fine!)
The finished Hay Bin!

1. Pick a litterbox the size you want. (If you want to make life easier and want to attach a hay bin without too much cutting buy a litterbox that fits the full size NIC or you will need to notch the front corners of the NIC when you make the cutout!)

Here you can see the notches I was refering too for the smaller litterboxes!

2. For those of you who are attaching a hay bin you will need to drill two holes in the top rim of the litterbox where the hay bin will be attached...like so...

3. Next we need to cut the light grating to fit the litterbox. It comes in a 2 foot x 4 foot sheet. Wire clippers work best for this part. You will need to clip a section of grating that fits as closely to the sides of the litterbox as possible...it should be sitting at least 1 to 1 and a half inches above the bottom of the litterbox! This will allow the pine pelleted litter to swell without touching the hay or bunnys feet!

4. Once you are happy with the grating it needs to have feet added for support! Grating can break and bend so adding feet helps support bunnies weight better across the surface!
When I cut feet I used to just use little ones but we found that 2 sets of long feet that run the width of the litter grate were best...when you cut out the feet you will need to leave nubbies on the top part that you will glue to the bottom of the litter grating. These will provide extra strength to the feet to keep them from popping off!
We usually leave a row of half cut squares which we then slide into the litter grating and then glue in place. You should be able to see what I mean in the pic.

5. Before you begin gluing...take a good look at the light grating...one side is bevelled(rounded) and the other is square cut...you want the square cut side facing down into the bottom of the box! It is sharper and you DON'T want bunny walking on this side!! Use a good quality crazy glue to glue the feet to the litter grating. DO NOT use the gel kind...it takes too long to set and in our case has shown to fall apart more easily than the regular crazy glue!

6. Once the glue for the feet has dried your litterbox should look like this:

7. This is generally how we divide our litterboxes...there is no need for litter under the hay bin...put a SINGLE layer of pelleted litter from the bottom of the box to the second set of feet leaving the top of the box bare for the hay!To use more than a single layer is wasting the litter and may cause it to swell up above the litter grating!


8. Now to attach your Hay Bin to the completed litterbox!
Take two zipties...feed them through the holes you drilled in the litterbox rim...
Loop them AROUND the bottom wire of the hay bin where it rests on the litterbox...

Bring them back towards you...

Then feed them BACK THROUGH the same holes!

Clip off the excess from the zipties!


10. Finally you should have completed your first Stormhaven Litterbox with attached hay bin! If you did it right it should resemble this one!

This is very cool, two of my rabbits love digging I made a screen but it is not perfect I will need a higher box as they both manage to pee behind of it, I just placed some pellets behind the box at the moment it works so they litter box is all dry just urine goes between the box and cage bars.
You must log in or register to reply here.
Share:
Facebook Twitter Reddit Pinterest Tumblr WhatsApp Email Link