Seems old Pup has had no luck in love. His family abandoned him, his two bonding mates have been more like lukewarm roommates, and the last girl he saw had a grudge against any long eared creature that moved. Now 8 years old with a lot of love to give and nobody to give it to except a sad old man who lives in a litter box, perhaps Pup was beginning to lose hope. 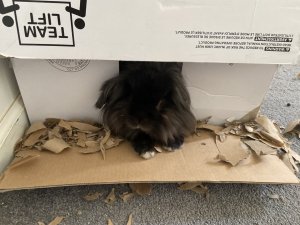 But then there was some commotion! His human hurriedly assembled a new enclosure, but to his surprise, not wrapped around him! He hardly had time to figure out what to make of this new development in his room before his human returned again with a grey carrier. He hid in his cardboard condo, fearing the carrier was meant for him, but again it was not!
The carrier was placed directly in the cage and his human fussed with it for quite a while, carefully disassembling it to release whoever was inside. He could hear them; the shuffling of hay beneath fluffy feet. Smell them - no, her - his new neighbor, he was sure she had to be beautiful but a checkered red sheet covered her cage so he couldn’t catch a glimpse of her.
Pup worked all night to riddle out a way to lay his eyes on this new girl next door.
It wasn’t until morning when the cage door slid open to release her into her carpeted courtyard that he finally laid eyes on what could only be described as the most beautiful creature on four legs. 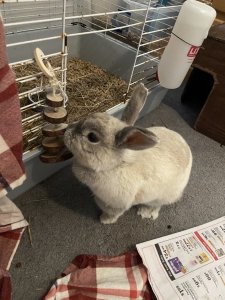 He was instantly smitten. Cautiously, he approached, daring not to offend her and risk her wrath like the last doe he’d encountered. At first she wouldn’t spare him a sideways glance, too busy acquainting herself with her new surroundings, but he was patient. He checked on her every few minutes, sitting at the bars, allowing her to approach at her leisure. 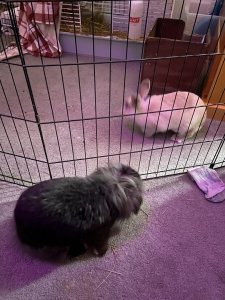 Finally she took notice and Pup was almost too eager to meet her! He wasn’t quite sure what to do with himself! But her graceful light-footed steps, calm and curious posture; he couldn’t help himself. He took the risk and pressed his nose through the bars, yearning to be closer to this fair-furred angel. He braced himself for a nip on his nose as he would’ve received before, but instead she offered him a polite sniff - a real introduction. 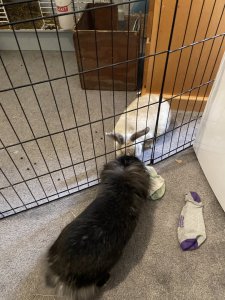 He couldn’t mind less that she had taken up his space. It was love at first sniff. She didn’t mind him at all either. She was so easy to love completely and immediately. Every passing hour, Pup was more and more enamored by his new companion. They shared so many interests; exploring, playing, chewing on toys, digging on blankets and in boxes, running at top speed across the room, and most wonderful of all: cuddling. He couldn’t wait to share all these wonderful hobbies with her! All he could do until then was lay as close to her as he could, pressing his whole body against the cage bars, inviting her to lounge with him. 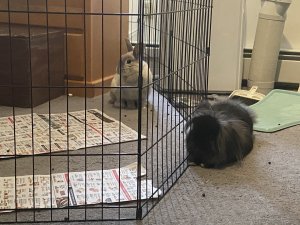 After hours of flirting through the bars, his beloved finally took her place beside him. 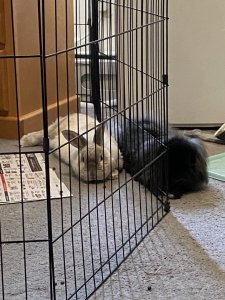 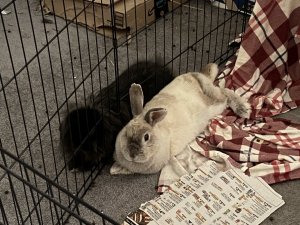 They look so happy together <3

Good luck bonding your love buns!!
I don’t mind the sappy long windedness, I love how you wrote the story!!!

Little update on the hoppy couple!
Now that Thumpet has gotten more comfortable in her territory, I’ve introduced her to Pup out in the yard. They’re still very much in love, though Thumpet’s hormones make her quite rambunctious. Pup is patient with her though, and accepts her authority right away. 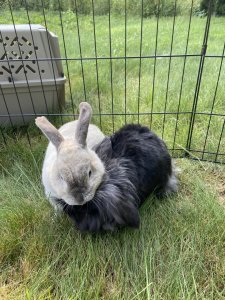 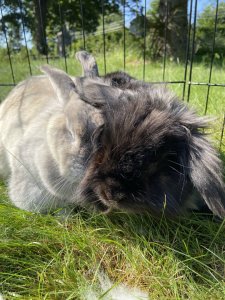 They’ve been getting along so well, i’m trying today with the barrier in their room down. Pup’s been happily sharing his most prized possessions with her. There’s been no territorial behavior on his part at all, and she’s not really being aggressive either, just some reminders who’s in charge which he allows and largely ignores. 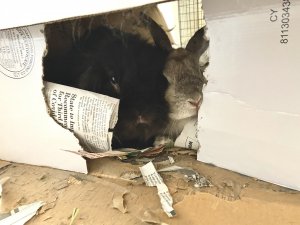 i’ll definitely be separating them again before the day is through if for no other reason than I JUST CLEANED and Thumpet is an EXTRAORDINARY poop marker!
Bonus though! And I think this is just so cute!!! Thumpet remembered Muffin from their last home together and they hang out like old buddies! They werent even officially bonded due to their intact status (Muffin never had a drive anyway so he was safe to put with females) but they always got along and never had any issues. A full year later without seeing each other, it’s like no time has passed! 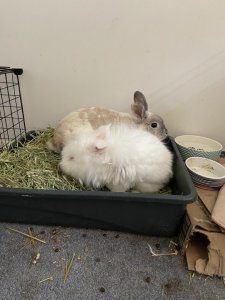 Update #2:
The lovebirds aren’t mounting each other as obsessively anymore and letting each other play independently. There’s been some 3-way snuggling in the litter box, sharing food no problem. Pup has taken a couple naps in Thumpet’s bedtime cage and she’s been napping at my feet. Territorial marking has reached a record low as well. I’m very tempted to let the three of them stay together, they’ve been great all day.
There’s some mounting and chasing - but not aggressive chasing, they settle right down and snuggle together. There’s a little grooming here and there. Idk, there’s no behavior that strikes me as concerning, so I don’t see much need to separate them. They get more stressed out about being apart than being together. I’ll still keep an eye out. Everyone otherwise seems completely normal, they’re just obsessed with each other like newlyweds. 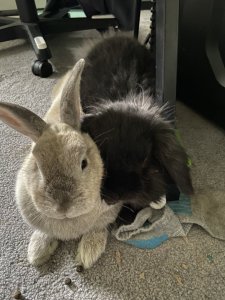 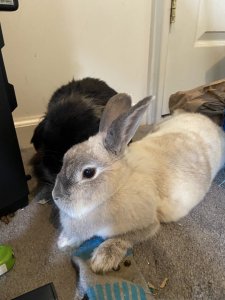