should I be worried? Rabbit created hole through bed sheet..

Good morning everyone,
One of my buns last night thought it was a good idea to create a giant hole on a bed sheet that I was using to cover boxes in my closets.. I woke up to the sound of her scratching at it and nipping. Now my concern is, is it possible she ingested it??? I cant find peices on the floor and I’m not sure if it’s big from her basically digging at it nor do I know how long she’s been doing this for since it was last night and I was sleeping!

we’ve had enough scares I’d say since she’s the one always getting into things you couldn’t even imagine she could get too! I’m worried and not sure if rabbits even do eat sheets. I know a vet says they chew but I can’t really find any residue half of the time.. even found a ziplock with emerg kibble have a hole in it.. anyone else dealt with this and know what to do? Should I be as worried?? Does the vet need another call.. crazy how rabbits literally find anything and everything! Any toy I give them too from oxbow that’s chewable or edible is always gone within a day! I try to keep the best distractions around for them but they use it up always so quick. Sos!

Normally they don't ingest what they destroy. It's about destroying things, the joy of gnawing, ripping, clawing and digging, not about eating. Happens all the time, last victim here was the tote bag I used to bring my stuff to work. Made the mistake to put it where Dotty insisted to go.
My first house bunny Fury got a dedicated blanket to live out her urge, didn't deter her much though.

From your photo there is nothing at all to worry about-- other than for your poor sheet!

I have giant perforations in most of my pillow cases, duvet covers and sheets now from a certain nibbly little mouth. And some have been totally shredded from both of them digging. They love burrowing into my cushions and pillows, pushing them around and then getting stuck in. I can never have expensive bedding again haha.

From the picture it looks like she had a little chew and then got her dig on. RIP sheet! 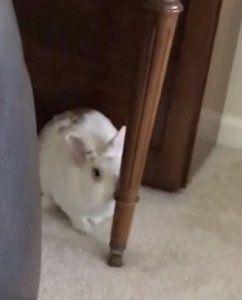 Hazel likes to make sure everyone’s paying attention and threatens to chew this piano leg occasionally.

Blue eyes said:
From your photo there is nothing at all to worry about-- other than for your poor sheet!
Click to expand...

You should see my carpet, I got a nice size hole and my bunny ate the carpet. But nothing happened, I just made sure she ate a lot of hay. While my pillow cases and sheets are just something that get nice holes but no eating. The carpet have a better taste. So there nothing to worry about

Whilst we’re on the subject of this, my bun has become obsessed with the pillows and duvet over the last week. It used to happen every now and then, but now seems to be part of her daily pre-nap late morning routine: Eat hay - Destroy the bed - groom - settle down for the day.

I hate to ruin her fun, but I’ll have to put some puppy pen panels over the bed today to see if that stops her before it starts getting expensive

I am having a similar worry, right now. One of our does has been a "chewer" since Day One; so, we've done everything we could think of to protect her from temptations. Little did we realize how determined she is.

Just before the weekend she lost her appetite and developed diarrhea; so, we took her to the vet and an x-ray image revealed what appeared to be a hairball in her tummy. It wasn't until we got back home that she led us to this and went right back to chewing on it. The thing of it is, there was no debris on the floor. I'm concerned that she swallowed some or most of it.

Her appetite is back and she's behaving normally, again; but, we're still worried that she might be still carrying a load of plastic in her stomach.

As a side note, the cord is now enclosed in a heavy steel sheath.