Should I be going to a ER?

My baby has been shaking/trembling most times he lies down since tuesday. Like when flops, or chills on his side..Ive called a couple vets offices but they tell me to just keep and eye out. That they dont have any available appointments until two weeks from now. Apart from this behavior we dont see anything else. He is eating, drinking, walking, running, pooping normally I believe. Thats why they tell me it should be ok but everytime I see him shaking I get worried.. am I over reacting?
Tried to upload videos but it wont work .. hes a free roam almost 5 month old.. 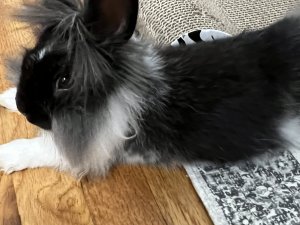 Can you get a close up video of the shaking and post it(upload to youtube, etc, then post a link here)? It may be you're mistaking the shaking as something bad when it might just be a normal rabbit thing. Since he's eating, drinking, pooping, and behaving normally otherwise, this would be what I would be inclined to think. But I can't really give much of an opinion without seeing what exactly is occurring.

Thank you! Alright.. I did it that way..

That looks just like fast breathing. A bit too fast for a calm and cool rabbit. If he's just stopped excersising, that might be why. It should pass soon after exerting energy.
He might be overheating-check his ears for that. They shouldn't feel hot. In case of milder overheating, giving cool water and a ceramic tile would usually be enough. You can also lightly spritz cool water on his ears to help him cool.
Slight cooling is usually enough to help, but if your bun still seems to have really fast breathing despite seemingly normsl temperature, one thing to consider would be stress-loud noises, new smells, sudden movements etc. Reducing stressing factors would also help him return to normal.

Thank you so much! Yes I checked his ears a couple times and his body for over heating or cooling he always seems to be normal body temperature.. He loves to be underneath our couch which is next to the heater so that was my first thought I opened a window so that the temp was a little more normal and checked him. Im starting to think its the latter hes a little skittish, hes slowly getting use to us its a little new but yeah im thinking maybe the loud noises. Im trying to not scare him ..

Underneath the couch... Does he have any more places that are slightly private? Maybe a nook in the wall, or under a desk, in a pet tunnel?
How long has he been with you?

Hes been with me for almost a month.. and yeah! He has a house, a tunnel, he also goes under our coffee table, under a small desk, a little nook under my computer desk.. he just gravitates towards the couch more

Ive been considering taking the ends off the couch but he really likes it in there to sleep during the day idk why but when hes awake he goes everywhere else, so i feel bad taking his sweet spot.. I also have a rabbit wood bridge and house in my cart waiting for some income hehe

Well, he definetly has enough spaces to hide if he's feeling nervous, so that's great.
Does he have enough to drink? Sometimes heavy breathing indicates lack of water.
Is he showing signs of comfort around you? Binkies, flourishes, flops, stretching around casually, sleeping with eyes closed (nose not moving while asleep)?
If he's looking comfy and settled but still constantly pants even though his temperature and water intake seems normal, i don't know what else it could be, it's unlikely to be a respiratory issue if everything else is okay with him.

Attached is the water thingy, I figured it was better because it carries more than my water bowl and it constantly inputs water, i also change it twice a day to keep it clean but idk maybe I will get something bigger

.. and yes!! I see him doing those daily ! Love the flops and binkies hehe.. thanks so much! This makes me feel better.. I honestly dont know either if he continues this way after a week Ill call the vet again.. Ive called them like three times this week and it seems that they think its fine because everything else seems normal

this was his flop last night...(you can see the water thingy in the back) 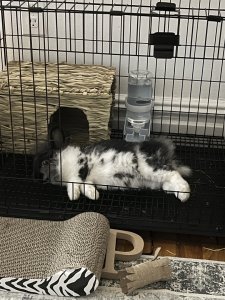 Yes, that shaking is from breathing too fast. So either your rabbit is getting way too hot and so is breathing fast to try and cool off, or there is possibly some sort of respiratory or heart issue going on there. If your home isn't overly hot(below 80 degrees) and your rabbit is only doing this after running around and being really active, then your rabbit is just getting too hot from activity. But even then, that is breathing is way too fast and means your rabbit is overheating too much, so steps need to be taken to help your rabbit not get that hot and to cool down.

If this rapid breathing is going on all of the time and not just at particular times like after activity or getting stressed from something(and it's not due to an overly hot environment), then it could be a health issue and it would be good to have your vet check the heart and lungs especially. If this rapid breathing is occurring non stop, I would want to get the rabbit checked immediately, because breathing that fast non stop is not a normal thing.

Rabbit Vets Near Me

A world-wide list of local rabbit vets near me maintained by House Rabbit Society so that people can find the closest rabbit vet near you.

Wow! Alrighty thank you! I will bring it up to the vet, The house can get a little hot I have him with cold water all the time and Im thinking of putting a cold compress somewhere so he can cool off some times. My apartment can get hot a lot. He doesnt do it all the time just some times a day. But Ill definitely have him check this thank you!

Try a stone or marble tile. And keeping rabbit safe cold packs under it or putting a frozen water bottle on it, will help keep it cool longer. You can also put the tile in the freezer to chill it first.

He wouldnt chew the sides of the tile?
Also Im getting water bottles, how to best put it near him??

Your bun is so pretty! I love how he flops! He's also got an elbow patch similar to my boy, what a cute little marking. 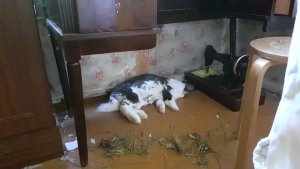 I bought four big tiles for dirt cheap at a local hardware store's clearance sales. Sometimes stores get those single pieces of tile that normal people just wouldn't buy. None of them match in colour and their patterning is half-half, but rabbits don't care at all. I paid 2 euros for those tiles, so i'd say it's a bargain.
Your bun may or may not try to bite it. Still, i wouldn't worry. The tiles are too hard and un-tasty for buns to do any more than an obligatory test bite/nudge and chinning. I know my buck took a taste at first but couldn't get anything and no longer bothered to chew it. Now he just likes splaying out to cool on those.

I don't know about water bottles though since i have two "rats" that will taste test anything. Even the insulation foil has a small nick because of them.
I've had one of them bite a hole in a plastic bottle(that was my first boy) so i'd swapped to different bowls after that. That's also why i've never risked with a water bottle. Some have mentioned that icing a bottle and wrapping it with towel and just letting it be on the floor of bun's leisure spot is enough.
Your water dispenser bottle/bowl thing seems to be a good fit-can't be tipped or bitten through, and it looks to be easy to drink from. If you're changing it twice daily, i wouldn't even worry about getting a bigger one. If it's too hot, i've had success with plopping an ice cube to the water to keep it cooler for longer.

My girl Iris seems to be a better model to show off the usefulness of ceramic tiles: 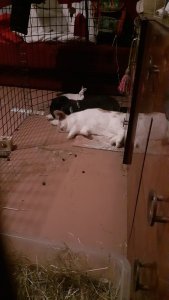 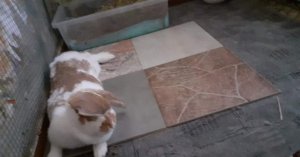 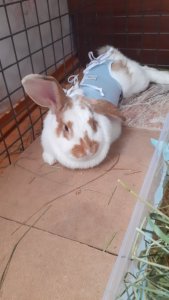 Wow! Thank you so much for all the advice I will definitely look for some tiles for my bun. Yours are soo cuteeeeee

.. and the ice cube yes definitely.. He hasnt been doing it as much lately but Im gonna do all these recommendations for sure until it stops. Today I put a tiny baby cold compress inside a sock to see if hed like that and he chewed it

Thank Goodness its one of those kiddy non toxic ones and i caught it in time that he barely chew on it and it was inside the sock still but almost gave me a heart attack.. Im still on look out for anything, so far so good...trying the tiles and water bottle hack tomorrow. Thanks again everyone! Ill keep yall updated.. 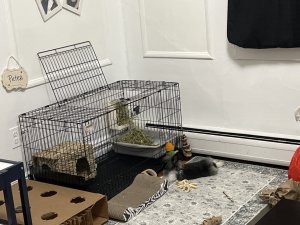 This is our current situation hehe..

Awh he looks really cozy!
What's that cardboard maze peekaboo looking thing in the lefthand corner? It seems like if it were size-fitted to my big fluffers and made mostly of wood, they'd enjoy it. I cannot give them anything remotely paper because they view it as food, but they usually won't bother so much with wood, so i was wondering what exactly it is?
Also, is it just me or are American electric outlets always making a 0_0 face?
You must log in or register to reply here.
Share:
Facebook Twitter Reddit Pinterest Tumblr WhatsApp Email Link