Rabbit sleeping with his eyes open

Recently I struck up a new friendship with a woman who fosters various rescue rabbits, and as we were furiously swapping cute bunny pictures, it came up that Lahi sleeps with his eyes open, to which she expressed shock. She’d never seen a rabbit do this! And then I was shocked right back, because Lahi does this and has always done this, and his sister Picca too when she was alive. So I’d assumed this was normal and common for rabbits, and that Delilah was the weird one for sleeping with her eyes closed all the time. It makes sense for a prey animal at the bottom of the food chain to have such an adaption, so I never thought it was strange.

I’m not sure if it is normal or not but it would be interesting to hear if anyone else has a bun that does this. In the meantime, pictures for everyone to enjoy, because it is concerning, adorable, and hilarious all at once.

Lahi normally sleep in a ball. If you watch REALLY CLOSELY, you can observe that as he puffs himself into the ball, he actually crosses his little arms under him. It is impossible to tell unless you watch him in the process of doing it, but it’s such a little old man thing to do. 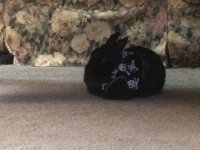 Sometimes he also sleeps stretched out, but his eyes are typically still open. 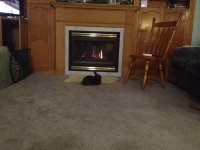 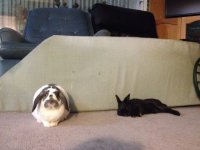 Lahi asleep, and then also not asleep and not happy about it. Thanks Delilah. 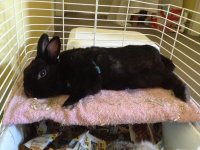 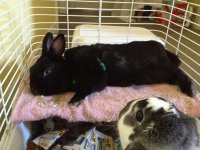 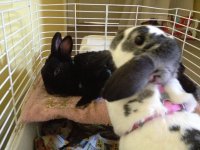 It’s hard to tell when he’s asleep, but a) his nose stops twitching, b) his breathing slows down, c) his eyes stop tracking most movement (until you move so much he notices and wakes up), and finally d) he snores.

He gave me THE WORST fright the year I heard him making this tiny wheezing sound. I immediately flew into a panic, rushed him to the vet LABOURED BREATHING THIS IS AN EMERGENCY!! The vet couldn’t hear a **** thing, not in his breathing, not in his chest, but trusted me to know what I was talking about and offered to keep him for observation free of charge that day, during which he made the sound precisely never. The vet concluded that if Lahi actually had something wrong with his breathing it would be worse while he was stressed, so it was probably nothing. I picked him up, got him home, let him out of the carrier upon which he zoomed into his hay cave and IMMEDIATELY began making the noise again. And while I was staring and staring and fretting it finally occurred to me... Lahi only made this noise while he was relaxed, not while he was stressed. He was in a ball. His nose wasn’t twitching. His eyes weren’t tracking. The breathing sounds were slow... he was asleep. He was SNORING.

So failing all else the tiny bunny snores are a pretty good indication that he’s asleep.

Delilah sleeping with her eyes closed is one thing but she also typically sleeps on her back with her little feet sticking up in the air. Definitely not a good adaption for a prey animal. She always looks dead. She never is. And she’s always super startled to be woken. 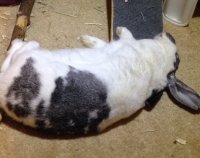 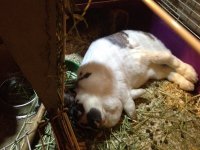 Must be nice to have a built in pillow. Occasionally Delilah also sleeps with her eyes open. For a given value of open. 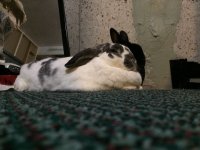 And if I can figure out how to post a video, I have one from when Lahi came home from his xrays still groggy from anesthesia and fell asleep face-first in his food bowl.

To my immense regret I’ve yet to be able to figure out how to rotate the video while it’s still on my phone. Uploading it to YouTube from my phone also didn’t give the option to rotate it. I’ll do it eventually with some video editing software when I put it on my computer, but for now, get a crick in your neck.

But you can see what I mean, how his eyes don’t track.

That's completely normal. My bunny does that all the time. As you mentioned rabbits are on the bottom of the food chain. Rabbits have the ABILITY to sleep with their eyes open but that doesn't mean that they would always sleep like that. Some rabbits do it often and some don't.

Completely normal. After all, it's not really unusual for a prey animal to sleep with their eyes open as they have to always be on the lookout for danger. But it also depends on the individual rabbit. Some sleep with them open, some closed, some both. I do notice though, that the ones that feel most comfortable dead bunny flopping a lot, tend to be the ones that sleep with eyes closed more often. I think they know they have a cushy life as a house pet, and don't have to worry about being eaten On the opposite end, my more nervy rabbits tend to be the ones that sleep in a loaf with their eyes open more often than not, and rarely(if ever) dead bunny flop.