my rabbit has been laying in a hunched position more often and he has been grinding his teeth. he’s currently sleeping in a flop so that’s actually good. anyways he’s had a sensitive stomach since i got him. ever since i’ve gotten him he has had gurgling noises from his stomach. i’ve had him for over a year. should i take him to the vet? i’m not sure on his hay intake. it’s hard to tell how much he’s eating his hay. i feed him timothy hay the kaytee brand. he’s eating lettuce fine. i feed him a spring mix from kroger so would that be bad for his stomach? is there any food that could cause less stomach pain. i honestly don’t know what to do.

Can you give him a tummy rub? Will he take a treat or pellet?
If you have simethicone (baby gas drops), you can also try that. Usually it works within an hour or so if it will work. It won't harm if it's not needed.

DanaNM said:
Can you give him a tummy rub? Will he take a treat or pellet?
If you have simethicone (baby gas drops), you can also try that. Usually it works within an hour or so if it will work. It won't harm if it's not needed.

i’ll get some simethicone later. he’s eating treats fine. when i go to the store i’ll get a different type of lettuce too. do you have any recommendations? i’ve tried romain and this red lettuce before. i can’t remember if it helped anything cause it was awhile ago.

Assuming he's eating hay well, you might try doing no lettuce at all for a few days, then slowly reintroduce one variety a week and see how he does... but you would want to make sure he's eating enough hay. Romaine does tend to be a pretty "safe" veg. Some bunnies also do better with dried veggies vs. fresh. You can get dried dandelion and some other herbs online.

If this is a reoccurring problem, it's likely he is sensitive to something you are feeding in his diet. Like DanaNM mentioned, it could be the spring mix. I would think the spring mix more likely than the romaine/red leaf lettuce, but the lettuce is still a possibility. I would start with cutting out the spring mix and continue with the romaine, and see how that goes. You also have to make sure greens haven't started going bad at all. If they have, that can cause a rabbit to feel sick, and if that's the case, this could be what has been making your rabbit sick.

If he's alright right now, he won't be needing gas meds, but it's certainly something that may help with future incidents.

Are you giving him any pellets also? I’ve had a similar thing happen with my bunny recently, over several weeks. She was eating too many pellets and filling up on those and consequently not eating enough hay to keep everything moving properly, which led to gas and discomfort for her. 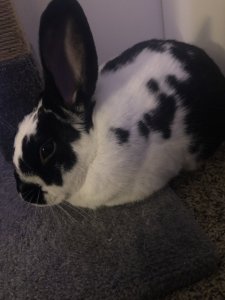 From this picture, he just looks like he's in loaf position which is fine. However. maybe I'm missing something.

If they are just sleeping and loafing, they will sometimes do a soft tooth purr that sounds a bit like teeth grinding, but is a softer sound and a result of contentment, not pain.

Tooth grinding from pain is usually louder and harsher, usually accompanied with other signs of pain like frequent shifting of position from discomfort, belly pressing(not relaxed flopping), a tight sitting up hunched posture, eye squinting, refusing to eat, sitting by the water dish and holding paws or head in the water, showing uncharacteristic behavior like hiding when that wouldn't be a normal thing, or wanting to be comforted and held when usually the rabbit wouldn't like to be held. 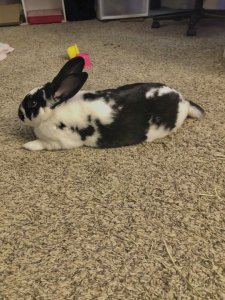 he’s also been doing this. pushing his stomach into the floor with his feet. i got him little remedies gas drops and i’m slowly switching to romain lettuce. i can feel gurgling and hear it and he’s also grinding his teeth loudly whenever there’s gurgling. i’m noticing that he’s been doing it more than usual starting about a month ago. he’s also breathing heavily.

I would suggest removing all veggies/greens/treats for several days to see if it makes any difference. If he seems to be better without eating these things, I would suggest a break for a few weeks, then if you want to try again maybe start with an herb like cilantro or parsley(slow, gradual introduction, and one new thing at a time to make sure there's no belly upset).

If you don't notice a difference then it's probably going to be a sensitivity to his other food that's the problem, most likely the pellets, but on some rare occasions certain hay can cause issues. I had a bun that would do that, belly press and would eye squint soon after eating his pellets, so I realized it was his pellets he was sensitive to. I tried several different kinds starting with tiny amounts, to see if he was tolerant of another type of pellet, but same reaction even at small amounts. So he went on a pellet free diet and was only fed unlimited hay and certain greens, and after that I never had an upset stomach belly issue with him.

What type and brand of pellets do you feed, and how much do you feed each day?

i actually don’t feed him pellets. his old owners had him on a bad brand that had seeds and other bad stuff in it and i haven’t been feeding him pellets ever since i got him. should i get pellets and feed him those along with veggies? i was thinking about getting oxbow adult pellets a few months ago but i just never got them for some reason.

I wouldn't try adding pellets or anything else until the stomach issues are cleared up. I would just remove the veggies and feed hay only for a few days to see what's causing the problem. Also make sure your bun is eating hay really well(pile the size of your bun, twice a day at least) and seems at a good weight(doesn't feel bony or skinny). And I would check your hay to make sure it doesn't show signs of mold(black or white spots in the hay, dampness, sour or musty smell, covered in a white dust).

okay so his stomach feels bloated. i haven’t given him any lettuce today and i gave him a little bit of gas drops. does recovering just take time? i do notice he’s feeling a bit better. 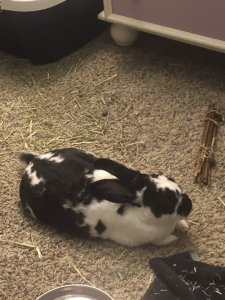 should i take him to the vet? i’m really worried. he occasionally gets up and goes to a different position.

Macy is 6 pounds and he's usually around that, but I've noticed he seemed bony lately too. he's a rex rabbit. I don't think he's a mini. I'm going back to feeding him lettuce because he seems bonier. I'm pretty sure you have to set up an appointment for my vet so if I do end up getting one it wouldn't be right away. He's eating treats and hay fine, I'm going back to his normal diet tonight. He just keeps going into the same positions and doesn't want to play. I encouraged him to run around with a treat and I force-fed him some water to make sure he was drinking enough. I also noticed he had goop by his eye. It looked like an eye booger.
Last edited: Dec 7, 2020

I would really recommend doing what Jbun suggested and just feeding hay and water for a few days, at least until you can get a vet appointment to check him over. Last week I did the same thing with my bunny because she had been really gassy and uncomfortable on and off for some time. She was a bit annoyed about the change in food offerings to start with, but it meant that her hay intake increased and there was a noticeable improvement in her within 2 days. She was like a different bunny, way more energy and a lot happier.

Feeding him lettuce won’t make him gain weight regardless, but if veggies or treats are potentially the things causing the problem, it’s worth cutting them out for a short time to see if it could make him feel better.

it’s been two days and he’s still not better. he’s lethargic at times and runs around during other times. he it eating hay and drinking but still has gurgling and gas problems

I would take him to the vet since he’s not getting better. I agree that he should keep just getting hay for now. Is he eating ok or just gassy? Hope he feels better soon!
You must log in or register to reply here.
Share:
Facebook Twitter Reddit Pinterest Tumblr WhatsApp Email Link