Hi, this is the first time I’ve ever posted to a forum website and it’s a bit of a long description so apologies in advance but I’m really hoping I can’t be the only person with a bunny in this situation...

We had a pair of bunnies for about 4 years, they live outdoors in a bunny shed with a grassed run attached. One lion head male we bought as a baby and one albino female who was a rescue bunny. On January 29th this year we found our male bunny Wilf had passed in the night, no idea why. Vaccinations up to date, no signs of stasis before bed, not snuffly. Completely well, hopping, pooing and eating on the night and passed away when I went to open the hatch to the run at 7am. Vet thinks it was a heart attack or brain aneurysm but because of covid I couldn’t get an autopsy done.

The next day our albino female Winter had runny eyes, took her straight to the vet and they thought it could be the start of snuffles due to shock, although the discharge was clear and watery and her nose was dry, no sneezing. Vet gave her a week course of baytril, still runny so we moved her inside to keep her warm and got another course, over the next seven weeks she was on baytril then Sulfatrim with no luck. Some days her eyes would be pretty dry, some days pouring down her face, far worse when she was outside in the run even when it was warm. One eye is almost constant, sometimes slightly damp on a good day, really bad on others, the other eye can be dry for days and wet on a bad day. All this time still no sneezing or nasal discharge. She also had antibiotic eye drops for a month of that time. Along with the antibiotics she was on emeprid and fibreplex.

Took her back to vets who said it can’t be snuffles anymore and to flush her tear ducts incase she’s got anything blocking them from being snuffly although the initial snuffles diagnosis was a bit weak, vet flushed her tear ducts and said they were perfect, no blockages and put the whole thing down to allergies even though she’s had the same mix of hay, straw etc for years and never had an issue.

I can’t understand how it could be an allergy, it’s not constant and is a million times worse when she’s outside but this started in January literally the day after we lost our other bun and not during pollen season. I booked an appointment with a vet who specialises in exotics and rabbits and he suggested a dental, dental done she had one almost spur and the rest were perfect, she always has apple branches to chew as we’ve got apple trees and a constant fresh supply of hay for her teeth and neither bun ever had overgrown teeth. The specialist now is also stumped and has suggested that she’s always had runny eyes but our other bun kept them groomed dry and that’s why it became noticeable the day after we lost him. She’s a rescue bun who we got from the RSPCA and a volunteer there did the bonding so I’ve never seen her not with our male Wilf until now.

Please can anyone help with any other suggestion as to what’s causing this, she can’t live inside permanently as we’ve got a dog and I wouldn’t want her stuck in a cage, but it’s so much worse when she’s outside which makes no sense to me. I can’t be the only person who’s dealt with something this weird and I don’t want to bond her with another male until I know what’s happening. Thank you so much to anyone who made it to the end of the story! And for anyone who can possibly give me any pointers x

If you have the resources, an x-ray of the head/CT scan could clarify what's going on in her head. For example, dental can seem fine on the surface, but sometimes the tooth roots can be overgrown, which can express through eye symptoms: 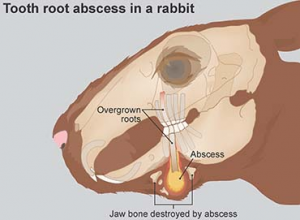 If it's possible that it's allergies, you could always test it and see. You can try ordinary Children's Benadryl (any flavoring currently is fine; make sure xylitol is not included as it's sweetener) for a week and see if it alleviates those symptoms you notice. One of my rabbits actually takes Children's Benadryl to alleviate her allergy symptoms. Without it, she gets a lot of eye discharge and her third eyelid always pokes out due to congestion around that area. This has been approved by my rabbit-experienced vet, as a tx from elimination, as x-rays and antibiotics were not showing anything else.

Also, is there perhaps anything you can do with the outdoor living space to make it a place with more controlled airflow?
V

Thank you so much for getting back to me, I wasn’t sure anyone would read it. I asked both vets about X-rays and they said it was highly unlikely to be anything dental because it comes and goes, instead of just being constant pressure, the vet who flushed her tear ducts said it flushed that easily if there had of been any internal pressure from a tooth root it would have been harder to flush.

I’ll definitely try the Benadryl though and see if there’s a lessening of her symptoms.How much do you give? Or do you know anywhere that lists amounts? Winter weighs 2.1kg.

The dosage I received was from my rabbit vet, based on my rabbit's weight, so I would check-in with the specialized rabbit vet about it. My rabbit is larger than yours, and she gets 1mL, twice a day.

To be specific, she gets plain Children's Benadryl (they have a more powerful version; just get the plain), which is "Diphenhydramine HCl/antihistamine, 12.5mg/5mL oral solution".

Due to pandemic-related factors at the time, there was low stock in pharmacies, so I could only get the bubble gum flavor. There are grape and cherry as well. As informed by my vet, all are safe, since none use xylitol as a sweetener (bubble gum is the most "artificial", and they use sorbitol as the flavoring, so it is safe). You will find things online putting both xylitol and sorbitol together in terms of being toxic, so if you are wary, both the grape and cherry flavor are just sweetened with sucrose and do not contain sorbitol.

Benedryl has a different active ingredient in the UK, and isn't used to treat rabbits there with allergy issues, that I know of. I believe the anti histamine used there for rabbits is Piriton syrup(chlorphenamine). If your vet didn't try anti inflammatories while doing the antibiotics, you may want to ask your vet about trying that as well. If there's any inflammation contributing, metacam(meloxicam) will help.

I wouldn't rule out dental issues completely though. Because of rabbits ever growing teeth, the problem could come and go as the teeth grow and change. So if the anti histamine or anti inflammatory don't help, you may want to consider getting xray/scans done to see what might be going on in there.

Has the vet done a culture on her poop? An effective holistic option I came across is vibactra. I’d find out if this is an option for you to try and doesn’t interfere with the meds your bunny is currently on.
You must log in or register to reply here.
Share:
Facebook Twitter Reddit Pinterest Tumblr WhatsApp Email Link