Next steps in bonding

In short, Toby (male, neutered, 3 yrs old) and Seattle (female, spayed, 9 months old) have been meeting on neutral grounds for 2 weeks. No signs of aggression, Toby asks for head grooming, Seattle usually grooms him and all has been fine. Their dates usually last 15-30 minutes until one of them hops off and does other bunny stuff. Toby mostly heads back downstairs to his area and Seattle goes to her food bowl
So far so good. Up until 3 days ago when Toby decided to start humping her, and this has turned into a humping stand off between the both buns. Seattle tries to sit on Toby's head and hump him or vice versa. We move them away from each other when this happens, because mostly it's a head hump (and those scare me, don't want anyone being bitten). The normal humping I've allowed for a short while but break it off after a minute or so.
My question, should I interfer with them or let them figure it out? And what are the next steps? I really thought they'd figured it out with Toby being groomed all the time and then they throw me a curveball with some humping battles.

Hi there! So, yes humping the face is bad. If humping is excessive then separate them. If you have any other questions feel free to either message me or reply to this message.

After 2 months of inconsistent bunny dates (work/school related) we are finally getting somewhere. Last week we started them in another new neutral area. They both were scared at first but now they are excited and run straight into the bathroom. Our male (Toby) requests grooming, Seattle (female) happily delivers the grooming. Not a lot of mutual grooming, every now and then Toby will give her a few licks. They snuggle up next to each other, explore together and eat snacks. So far they get along fine for 1 hour and then Toby has to hump her. He doesn't go for her head anymore and Seattle doesn't seem to mind. It usually happens right when they both lay down, ready for a nap. Seattle doesn't bat a bunny eye lash, she just takes her nap

After the short hump session, both bunnies go back to snuggling.
Any advice on next steps? Is there a way to get Toby to groom Seattle or is this what their relationship might be? Toby gets all the grooming and Seattle might be lucky with a few licks every now and then.
And when can we get them out of the bathroom and see how they do in a shared not neutral space?

And just like that those buns surprise you once again Today's bathroom date went perfectly fine, both were eager to get to the bathroom and spend several hours without any humping. There was some grooming (mostly S doing the work), they tried to get in trouble together, there were peaceful naps and it was just perfect. Even adding in a bowl of food and hay didn't cause any issues. Seattle (who goes crazy over anything food related, she will steal food out of your mouth if she can) happily shared food and didn't eat it all within seconds. I already knew these two love to be together but there are tiny (hump) issues to be resolved. Hopefully Toby can keep the humping to a minimum from now on and we can start moving them in together soon. 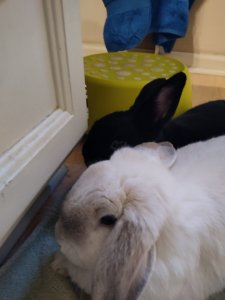 I can't help with any of the humping issues as my current pair, Storm and Iris, never once did it during bonding, which luckily happened to be a week of smooth sailing. But it was super obvious that Iris was the main groomer and would gladly run to give kisses when her date loafed down and asked for it. She got a few licks in return every now and again, but those were rare. About half a year into their bond, Storm started grooming her back more actively.
Your fellows might still be figuring out their positions, and maybe Toby will eventually decide to groom her more as their bond deepens.
You must log in or register to reply here.
Share:
Facebook Twitter Reddit Pinterest Tumblr WhatsApp Email Share Link