I have 2 rabbits (Male and Female). They’re both free roam and both littler trained.
The Female is about to turn 2 and the male is around 8/9 years. (I’m unsure of his age as he was adopted as an older bunny and they told me he was about 7 but I’ve had him for 3 years not and he’s very sprightly, active, healthy. The only thing that would indicate that he is older is that he’s started to struggle to keep the weight on but I’ve been putting him on a special diet for that)
Anyway. My male has been neutered for almost as long as I’ve had him. He was very “sexually aggressive” when I first had him and would jump anything in sight. The neutering calmed him down significantly and now I’ve not had that problem until a couple of months ago.

He’s flipped again. He’s marking everything, leaving droppings all over the place (not general pooping but marking droppings) and spraying, mostly me and mostly when I’m asleep in bed.
My poor baby girl is being humped every opportunity he gets and she always runs away. They have a very loving relationship so separating them isn’t an option, although I will put her in a pen or him in a pen for a few hours for them to have space towards the end of the day.

I guess my question is to you guys. Do you think this is a sign of him ageing or some sort of illness? It’s gotten so extreme that my partner has even suggested rehoming him, but the buns are both happy together and I love them. It’s just becoming very difficult to manage him.

I was debating getting a non neutered female that would let him hump her to calm down his hormones but I’ve never had a trio and don’t know whether that would worsen the situation.

Thank you for any help

This isn't normal behavior. There's a likely health problem causing this to occur. There is something called 'spring fever', that can cause some minor hormonal type behavior in spayed/neutered rabbits. This can be a pretty normal thing to happen in the spring, but usually this happens, like it's name, in the spring, and is minor, and settles down after a week or two. I doesn't sound to me like this is what's going on here with your rabbit.

For ongoing persistent hormonal behaviors in fixed rabbits, that's excessive and doesn't clear up and settle back down in a week or two, I would be presuming there's a possible adrenal issue going on. Especially in an older rabbit.

So there are things that could possibly be done to address this. First a blood test checking hormone levels, would need to be done Adrenal problems is a somewhat unusual thing to occur in rabbits. So for something like this, I would suggest going to a very experienced rabbit vet, so they can get your rabbit the correct diagnosis and treatment, as you may have trouble with getting the correct diagnosis with a less experienced vet.

Nowadays the health, welfare and behavioural benefits of neutering both male and female rabbits are well known and documented. Neutering rabbits makes them happier and healthier and enables th…
rabbitwelfare.co.uk

The RWAF is keen to put owners in touch with vets that show a greater knowledge of rabbit care through our Rabbit Friendly Vet List. The list is constantly being updated and whilst we haven’t…
rabbitwelfare.co.uk
T

Thanks for your help.
He’s all booked in at the vets for some tests. As much as I didn’t want to admit it, I did think it was a health issue as he’s older.
Hopefully we can find the source and treat it

The adrenal problem is definitely a possibility. Another one is that of an incomplete gonadectomy.

We have a buck that was neutered when he was very young because we didn't want him to become a daddy with his sister that we had paired him with.

Everything was peachy for a while; but, he became hormonal, again, and would not leave his sister alone. We had to separate them.

I won't go into the details of trying to convince several different vets that something had gone wrong with his neutering; but, one wonderful vet paid attention, operated, and found remnants of tissue that had not been removed when he was first neutered.

She removed the offending growth and now our buck has calmed down, doesn't spray any more, grooms his sister with tender loving care and is the best little boy we could ever hope for.

The doe is the brown one; the buck is gray. 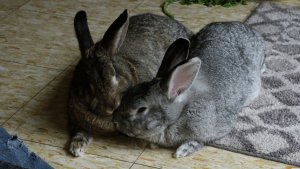