My rabbits weigh less then five pounds.. Is this okay??

Location
With My Rabbits... Where Else Would I Be?!?!

There is a picture below of my rabbits. Lincoln is the white/grey Lionhead & Lucina is the other. None of them are skinny. Lucina looks a little over weight and Lincoln is just right. Lincoln weighs 2.67 pounds and Lucina weighs 3.47 pounds. They say for every five pounds your rabbit weighs give them 1/4 cup of pellets a day. I calculated it and if I did my math correctly I would give Lincoln 1.5 TBSP and Lucina 2.5 TBSP a day. Is this okay? Are my rabbits dwarfs? They don’t really look like dwarfs to me, although I don’t think I have a say because I don’t see a lot of rabbits (besides my two) in person.

When I got my rabbits they said that Lincoln was a Lionhead/satin, and Lucina was a satin/silky. (I know silky doesn’t exist in rabbits... lol)

Thanks so much! -Kaylor

While rabbits that are 5-7 lbs are recommended to get 1/4 cup, it doesn't then follow that smaller rabbits get even less. An article that discusses these recommendations notes that:
"There is evidence that small breeds (under 2 lbs) may require a diet higher in energy and lower in fiber than the larger breeds (Cheeke 1987, 324). Several foster homes have experienced digestive problems in rabbits under 4 lbs who were put on severely restricted diets."

So, rabbits less than 5 lbs should still get 1/4 cup or may even need a bit more to maintain proper weight. It depends on the individual rabbit. Adjust the amount based on what each rabbit needs to maintain good body proportion.
Last edited: Apr 5, 2020

Rabbits that are 2 or 3 lbs seem really small to me!

I've never had one that tiny. You mentioned that since your rabbits are the only ones you see in person, they don't seem so small. So I thought I'd attach a photo for perspective (and for fun!). Here is one of our rabbits that was in that 5-7 lb range. 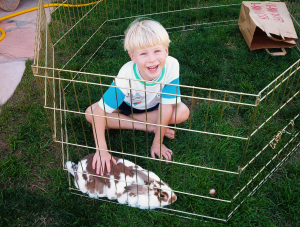 I feed my holland lop 1 tbsp pellets, that’s all he need to keep his weight up and be healthy. But I also change the pellets amount after season. For example during winter he gets 0,5 dl. I’m used with another measurement but it’s around 1/4 cups. He weights 5 lbs, while my netherland dwarf only got a 1 tsp with pellets, he weights 750 grams. But my netherland dawrf is off pellets until he drop the weight he have gained, so only veggies and hay for him, he get pellets as treats a few times during the week but only a few pices. 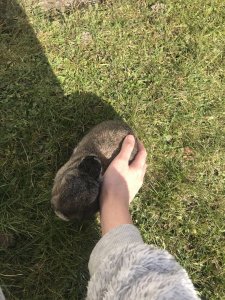 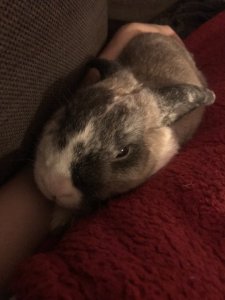 Myself also got blind to sizes when I only had my netherland dwarf. The same happened to my parents and many other people. They got the idea that the size of my netherland was normal. So later when they met other bunnies with normal size, they would think it was a really big rabbit.

Location
With My Rabbits... Where Else Would I Be?!?!

Thank you so much @Blue eyes & @Hermelin! I will give them 1/4 of a cup a day! @Hermelin your rabbits are so cute! @Blue eyes my rabbits are definitely a little smaller then in your picture of reference. It’s just really weird to me because my rabbits don’t have the features of a dwarf rabbit. In fact Lucina has very long ears. (although each one is the age of a fully grown rabbit.)
You must log in or register to reply here.
Share:
Facebook Twitter Reddit Pinterest Tumblr WhatsApp Email Link