My Rabbit is In Love With a Beach Ball

My netherland dwarf mix rabbit Mac really really likes these two blow up beach ball toys we have. I've had my rabbit for about two and a half years now, currently he is not neutered. I have been planning on getting him neutered but because of COVID my finances got thrown out of whack for a while and I've had to put it off. I originally got one of the beach ball toys as a toy for a summer party, and I showed it to him just to see his reaction. He immediately fell in love with it. He originally would just circle it, honk at it, and lay next to it, but now he has also learned to... Have his way with it. We got him a second one since the first one had been having some issues with staying inflated. Anyways, recently he's been especially obsessed with these balls to the point where when I let him out of his night crate he immediately runs to them and spend hours upon hours circling them, humping them, and laying next to them. He barely even interacts with anything else and just goes wherever they are. I'm kind of worrying that it's become obsessive for him and I'm worried that it's not healthy. Should I separate him from his ball lovers? Is this just a way he copes with being an only rabbit and not having a mate? Would it be a good idea to think about getting him a friend (after he's neutered)? 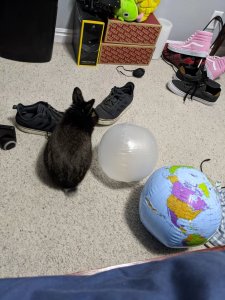