(This is somewhat a continuation of a prior thread where I asked if others have had a hedgehog.)

Here is my new little fella. Tomorrow I will have had him for a week. He's been super easy to handle. He even had a foot bath today. (not sure what he thought of that!) 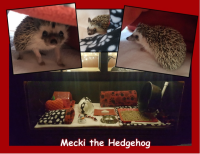 I hate you a little bit! You know I say that with all the love in the world, though . Hedgies are so freaking cute, but I've heard you can't really potty train them and I'm just not up for that kind of habitat maintenance in addition to our current menagerie.

Imbrium said:
I hate you a little bit! You know I say that with all the love in the world, though . Hedgies are so freaking cute, but I've heard you can't really potty train them and I'm just not up for that kind of habitat maintenance in addition to our current menagerie.
Click to expand...

Haha! So far, I'm pleasantly surprised at their care. Granted, I'm still quite new to all this. The first one I had for a month or so, and this one for a week. In that short time, both only ever went poo on their wheel (yuck, yes while they're running) or in the litter tray under the wheel. (Ok, also on me once or twice when I didn't get that all that digging was because he was trying to get somewhere.) I didn't have to change the fleece once with the one I had a month.

Yes, it was the pooping-while-running (meaning the wheel most likely sprays it everywhere) that made me tell hubby 'no' to a hedgehog. Sugar gliders are the same way, but much smaller - poop while running, throw food everywhere, use owner as a toilet, etc. Never had a piggie. Only exotic I've had that I don't currently have is a degu that I had in college (omfg, they're so smart and adorable!! I got mine through airport security multiple times because of his instinctive knowledge of when to be super quiet and still!).

The first time, I had him in the open and got told I needed to get rid of him... acted like I left, put him in the bottom of my carry-on while in the bathroom and then returned to the terminal... when pressed, I told the guy I put him in my car and called a friend to pick him up... he then searched my carryon bag and the normally very social Christopher stayed curled up in the bottom until the guy was sure he wasn't in there!! Then on the return trip, I had him sitting on my shoulder under my trenchcoat going through the metal detector for security and he was SO still when I most needed him to be. He liked to sit on my shoulder/hide under my hair. If I was laying on my bed and had my hair in a ponytail, he would actually tug the elastic out of my hair and then run back and forth through my hair to spread it out! He also seemed to sense my anxiety and instinctively know to stay hidden in my curls in situations where a RA or other narc-type person was talking to me.

The degu sounds super fun -- especially yours! What a smarty! And what a character!

I think it is far too hot where I am for a degu. That's also why I chose a hedgehog over a chinchilla. The hedgehog has to be over 72F while I thought I saw chinchillas need to be kept below 75F and degus are supposed to be below 68F? I don't like it cold. Our home is around 80 inside nowadays. So hedgehog it is.

Yeah. Now you have to get a degu and a cornsnake!!

OMFG, DO NOT SAY THAT TO HUSBAND!!! One or the other, thank you! He wants both. I dunno about 68F, but definitely chinchilla temps or lower for degus. Roomie and I's dorm room was probably around the low 70s and both our degus seemed happy there... right up until the RA knocked on our door one morning to evict them, that is! Currently, we're not permitted to set the central air below 78F (borderline but acceptable for rabbits in the living room) but we have a window unit in our bedroom (where we spend most of our time) so that room is more like 65F or below.

Very cute-congrats! One of the few animals we didn't have over the years.The only thing I really miss since we moved here are my Koi.

^ Ha. Guess it's a little warm in Vegas for the Koi? Never did have Koi. We used to have lots of aquarium set-ups but that's been quite awhile ago. I'd love to have a tank with discus.

Just a bit warm here and our yard is smaller than our other place so we can't fence in the canines to keep them from wading. We used to have 8 aquariums and one huge Arowana--very prehistoric looking.

Oooh... we had an arrowana also. He wasn't real big though. Our largest fish we ever had was a red-bellied pacu in a 150 gal. He was larger than a dinner plate.

We had his and her tanks.
I had my preferences for fish and hubby had his. His favorites were the peacock bass and frontosas. We both liked the pacus though. They would make eye contact with us for sure.

I had 4 Red cousins to the Pacu that were huge Had 2 Red Tiger Oscars that were big and beautiful. The Arrowana was 22 inches and I had a Black that was 12. We had to have several tanks as the Red P were the only big fish we could keep together.

Here's my Mecki after a foot bath and nail clipping. Ugh... his nails were harder to clip than my rabbit's! What a squirm bug! But he's still soo cute so he's forgiven! 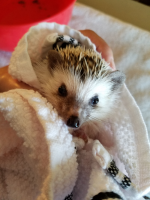 So cute! Now I want one!

Blue eyes said:
Here's my Mecki after a foot bath and nail clipping. Ugh... his nails were harder to clip than my rabbit's! What a squirm bug! But he's still soo cute so he's forgiven!

Blue eyes said:
Here's my Mecki after a foot bath and nail clipping. Ugh... his nails were harder to clip than my rabbit's! What a squirm bug! But he's still soo cute so he's forgiven!

I love rabbits and hedgehogs! if you don't mind me asking where did you get him?

bunnylove2024 said:
I love rabbits and hedgehogs! if you don't mind me asking where did you get him?
Click to expand...