BunBun71 said:
Hello - I hope you both had nice birthdays! You have been missed! I love the pictures - Theo's cake is BEAUTIFUL! How did you make that cake?? Do you have any kind of recipe? I would love to try to make one like that sometime. I think a YouTube channel would be great. It would be perfect for me. I would definitely watch your videos. Theo is so cute!

Thank you! Sadly, I did not make the cake. Last Christmas I got Theo a Happy Bunny Club box and added the cake to the box for $7 (that is the cheapest I could find it since it comes from the UK). Here is the link to it: Happy Bunny Club - Shop/Product.

Here is an idea for a cake if you want to make one (It is full of sugar, so please limit it):
Also, I love your poem! It is so cute! Did you write it?

I've never heard of cake for a bunny! What a neat idea.

Mariam+Theo said:
Also, I love your poem! It is so cute! Did you write it?
Click to expand...

I found it on the web, and then changed "Easter Bunny" too "Little Bunny".

Mariam+Theo said:
Thank you! Sadly, I did not make the cake. Last Christmas I got Theo a Happy Bunny Club box and added the cake to the box for $7 (that is the cheapest I could find it since it comes from the UK). Here is the link to it: Happy Bunny Club - Shop/Product.

Here is an idea for a cake if you want to make one (It is full of sugar, so please limit it):
Also, I love your poem! It is so cute! Did you write it?
Click to expand...

That is an adorable cake.

I probably will make that cake for BunBun's birthday. And I will look at the link that you sent me. Thank you again.
-BunBun71

Hello! Since Wednesday Theo and I have just been chilling! Saturday I made some treats that were a fail (I was so scared that the hay would catch on fire! Has anyone had that happen?), and then I made a woven ring out of tall crabgrass. I have given him some of the treats and he loves them, even though they are so crumbly! I haven't given him the grass ring yet because I want it to dry out so that it is all crunchy.

He is covered in cobwebs in these pictures because I had just let him explore our shed and he loves getting into those places I can't dust!

I have lit hay on fire while making treats!

I actually forgot that they were in the oven!

Hello! Yesterday was grooming day and Theo got to spend all day in my room! It was so fun and we were able to cuddle up on the couch and watch Gilmore Girls. There was only one accident where he peed on the floor, because he didn't know where the litter box was

His favorite place to hangout was underneath my bookcase! It was so cute!

I do have a question about nail clipping though. Theo's back nails are so long and the quick is so overgrown that I can't even clip anything off. He is also super annoying when nail clipping because he sits on his back feet, and won't stay still. I had to get my friend to give him nose rubs the whole time to keep him distracted. What do y'all think I should do? He also has really dark nails so I can't see the quick at all and him flinching makes the "press, press, clip" method super hard.

September 1st was Theo's gotcha day, and I might have forgotten When I remembered it was already too late to celebrate, so I grabbed him some gifts and decided that we would celebrate on the 2nd.

So, last night Theo and I had a party! I made 2 of those carrot cakes (the ones in the video that I sent to @BunBun71, but I tweaked the recipe a little) but Theo only had one because we don't want him to get fat or have a sugar overload. Theo also got 4 gifts from Dollar Store, I didn't want to blow the budget by getting him toys from the Pet Store. He got a new harness, a new leash, some all-natural apple chips (which I had no idea Dollar Tree carried until yesterday!), and a batwing headband (which I'm going to attach to a DIY Harness so he can have a cute little bat costume for Halloween. I also made Theo a little house, which I broke on the way down to the shed, but he still loves it. He told me, "it was the thought that counted."
He wasn't very excited while opening gifts, but afterward, he loved them!

That was awesome that you had a party for him! I'll do that with BunBun once I get him settled into his new home.

Today Theo is going to the vet for a checkup and to get his nails clipped. It is going to be a long ride (it is 40 minutes away) but he normally does really well in the car. I am going to have some veggies, hay, water, a towel, and some apple for him to keep him from getting stressed. I'm bringing his carrier and harness, and I'm going to bring his bear for comfort. What else do you think I need?

Do you think he shouldn't be going because of RHDV2? I'm not really scared of it, but if you think it is too risky going to the vet, we won't go.

I think its fine, I don't see much of a risk as long as Theo doesn't stay outside and eat grass and stuff. Also, I think everything you have is good, and you don't need anything else.

40 minutes isn’t too bad. The rescue we went to was a little over an hour away and Apollo was totally fine, he was flopping, in his usual set up (carrier with a bed and hay inside). But of course, it would depend on how Theo does while in the car.
It should be fine to take him to the vet even with RHDV, you could even ask if they have or could get the vaccine for it

I know I haven't updated in a while and I had planned to update later today, but I just saw this on Pinterest and had to share it with y'all! 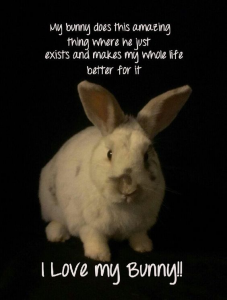 I haven't posted for quite some time and I'm sorry about that! I recently left for vacation and I just got back Saturday night. I had a ton of make-up work for school so after church on Sunday I did hours of school and then today I also had tons of work.

Recently, I have been making and buying tons of toys for Theo (I will do an update soon with a picture of all the toys I have collected). Theo loves the cheap homemade toys and avoids the expensive cute ones, LOL. I also added a new rug to his pen (see picture) and he loves it! It is only for the fall and winter to keep his paws from getting cold because in the spring and summer he loves the cool concrete.

Does anyone else think that their rabbit understands them? Because yesterday I was cleaning out Theo's pen and when I lifted up his bear stuffed animal there was a huge spider! I'm not at all scared of spiders, but this one made me scream and yell "Theo! Tell your best friend to go away!" (I said best friend because there are always bugs in Theo's playpen and I call them his best friends. So far he has a beetle friend, a cricket friend, several millipede friends, and 3 spider friends.) Theo comes running over at full speed to see what I'm yelling at and runs right up to the spider, touches it with his nose, the spider runs off, and Theo goes back to playing! I really do have the best rabbit in the world

Today, I was doing school in the shed while listening to music. It made me wonder how anyone can have an indoor rabbit and still get stuff done during the day! Theo was demanding cuddles and food the whole time! He managed to steal several chip crumbs right out of my hand...crazy boy. He also decided to stand on my keyboard, but that was ok because he managed to restart my favorite song so we got to hear it again. He was so cute though and I took tons of pictures of him! The picture of darkness is Theo in his "secret" hiding spot in the shed.
I have started putting his dinner in toys to make him work for it, so the last picture is him sticking his head in a cardboard box full of hay and his dinner

Also, I have got to get a new playpen! Mine is so gross! I'm thinking about looking at garage sells, I'll let y'all know what I find.

Mariam+Theo said:
I have removed the text so my post isn't to long! -HJ
Click to expand...

Oreo also avoids the expensive and cute toys to!
Also, I can't get any school done with Oreo around. I mean I can't ignore her!
B

Also, I meant to add this picture to my post earlier but forgot. So here is baby Theo!
Click to expand...

5 pounds is overweight for a mini rex. You said that he has a bit of harlequin in him. No he does not, harlequin is a breed and a color. He is the color harlequin, harlequin is a variant of a tricolor. He should only weigh around 3-4 pounds, ad females should weigh only 3.5-4.5

Berry&Raisin said:
5 pounds is overweight for a mini rex. You said that he has a bit of harlequin in him. No he does not, harlequin is a breed and a color. He is the color harlequin, harlequin is a variant of a tricolor. He should only weigh around 3-4 pounds, ad females should weigh only 3.5-4.5
Click to expand...

Thanks for the concern! Theo was overweight for some time when I didn't know what I was doing and kept him in a tiny cage that I am ashamed to have ever wanted. Because of that, he has a dewlap with all his extra fur. Once I realized everything I was doing wrong I quickly switched him to a playpen and got him on a better diet. Theo is not a purebred Mini Rex so his weight is going to differ from a purebred Mini Rex's weight. The last time we went to the vet, they said that he was in great condition and not overweight. I give him a very strict diet (1/4 cup of pellets from small pet select, 1-2 cups of leafy greens, unlimited timothy hay, and unlimited water daily. 1 small treat and 2-4 BOSS to keep his coat nice and shiny, every otherish day) to keep him from getting overweight. I check him over bi-weekly for a health check, but also to feel his ribs and check his hocks. His ribs are always harder to feel because he has very thick fur since he is an outdoor rabbit. He has never developed sore hocks even when he has a concrete floor in the summer, and sore hocks are a simple sign of your rabbit being overweight. Even though he weighs 5 lbs that doesn't mean he is overweight since he isn't purebred and we don't know what breed his dad was. Thanks for pointing that out though!