Actually this won't be Luna Bunny's blog as she doesn't type, it'll be a blog about her!

I picked Lu up today from the rescue.

It was about a 30 minute ride home. About half way home I stopped at a food truck to get dinner. I checked on her and she was shaking. I didn't see anything to do about it, I assume she was just out of sorts because she left her home of the past 8+ weeks, the car ride, and being kidnapped by a giant (me).

We got home and I put her at the side door while I went inside to let Bubba the dog out. I then brought Luna in and kept her in her carrier next to her NICS pen and inside the Xpen around the NICS pen. I filled her litter box, water bowl, hidey hut, and gave her a sliver of apple and a few sprigs of cilantro. I moved the carrier directly up to the NICS door and after a cautious 2-3 minutes, she went into the NICS cage.

Luna sniffed around for about 30 seconds, found the litter box and went into somewhat stealth mode. After about 5 minutes she started eating the hay. This made me happy. After all - happy belly, happy bunny. She stayed in the litter box for about an hour and a half before she came out and ate the apple pieces. She went back to the box and has been in there since. Hopefully tomorrow she'll venture out a bit more.

As I suspected, Bubba has been very interested and was going up to the Xpen repeatedly for the first few hours. Now she's sitting next to me. In a couple days I'll open the NIC door and see if Luna want to venture out into the Xpen. I'd imagine Bubba will be right there on the outside looking in.

Pictures will come later on.

Congrats on getting her! You must be so excited!!

She has settled in well. Holy gaucamole, she poops a lot. I'm glad to find out it's the consistency of dog food and not dog poop.

LB and Bubs have been face to face a couple times with the Xpen separating them. It was LB that went up to Bubs, then LB after a brief hello went back to the Nics pen.

After about a week of keeping her inside the Xpen around the Nics pen, I started letting her free roam a bit. It's quite interesting seeing what grabs her attention. I don't have the house bunny proofed completely. I will work on that this weekend. There's only a few things I need to do to complete this.

As for LB and Bubba dog, things are going as I anticipated. Bubs is indifferent other than when I am paying attention to LB and not her. They've been face to face quite a few times with LB going to Bubs. Then LB zooms off to do her bunny thing.

Things are going well and I'm glad LB joined us.

More pics from a proud papa.

2 days ago LB, Bubba, and I went to the vet. No issues with LB however Bubba went in for her doggie check up and I figured we can get LB "on the books" and to get a vibe about this vet's bunny-ness.

Bubs is 10 years and the vet said she's in excellent shape other than the slight arthritis in her rear. Sadly I am all too familiar with Shepherds and degenerative hip issues.

The vet checked over LB and also said she's in excellent shape. A whopping 5.2 lbs (23.6 kg). I asked about LB's weight and the Doc said it's good as she can slightly feel her hip bones. LB also got a nail trim. With our conversation, I feel good about using this vet. I called around to many vets in my area and this vet was the only one I found that has extensive bunny experience.

In addition to the vet visit, the past 2 days I put together a DIY hydroponic system so I can grow herbs for LB (and my brother in law). That info is here if you're interested: Hydroponic/ container gardening

I've been thinking about Luna dog a lot the past few days. Luna went away Christmas week of last year. I just want to lay out the ties to Luna and LB here as well as sort of a tribute to Lu. Lu was a great mutt.

Lu was with my mom and when mom went away I brought Lu and Higgins to be with me and puppy Bubba. Higgins went to be with my sister and niece after a couple years as 3 large dogs was a bit much to keep up with. Man I miss Higgins as well as Lu. Higgie went away a couple years ago. He was a special pooch. A lot of people believe their creatures are special. They may be great creatures, but in my opinion the reality of it is they're only special to their people. Every now and again is a truly special creature (human, canine, bunny-nine, or whatever). I can't explain what I mean with that last part, but Higgins was a truly special mutt.

Lu and Bubs spent 9 years together. Once Bubs matured, they didn't play or interact too much. That's why I was baffled with Bubs demeanor after Luna went away. I wasn't sure if it was because Bubba missed Lu, even though they didn't interact much they were still family. The other possibility is that literally for every second of Bubs life, she was never alone until I took Lu to the vet for the final time. Maybe a combination of both?

After a couple weeks of trying to help Bubba through this, nothing was working. Extra walks, more belly rubs, etc. I decided getting another companion for her is the way to go. Of course another pooch was where my thoughts were.

The woman that lets Bubs out during the day has a neighbor whose life changed and was looking for a home for Kimber, a 2 year old male Shepherd. Perfect! Just what I was looking for; a 6mo - 2 y.o. male Shepherd. John understood that Kimber being with me was a "trial". I was very clear with John with not only that, but the main criteria was that it still needs to Bubba's house. Mainly Kimber didn't understand that and a few other minor reasons, it didn't work out and after about 3 weeks, Kimber went back to be with John.

What to do now? I was fortunate in that situation but I couldn't keep "trying" other pups to get what I was looking for.

Then it crossed my mind that a companion for Bubba doesn't need to be a pooch. I'm certainly not anti cat however that wouldn't be happening. What else? I started looking at exotics. Chinchillas, ferrets, guinea pigs, bunny rabbits? After reading about the different creatures, I'm here so you know which path I chose .

And now the task of finding a bunny. I checked web sites for rescues. I saw this one super cute bunny at a somewhat nearby rescue. He was so cute from the close up picture. I looked at the other pictures and he was a monster... HUGE. The guy holding him in the 2cnd pic definitely had his hands (arms) full.... nope.

I believe it was at the Pet Finder web site I saw an adorable bunny. From that listing I went to the rescues web site to check out this beautiful bunny. Her name was Luna!!! That, numerous e-mails with the asst. director of the rescue, and Luna Bunny (LB) has joined Bubs and me!!!

It's been about a month since and I am VERY fond of her. I'm almost certain it won't be too long before she achieves the same status as Bubba in this household and in my mind.

LB has the same name as Luna dog and LB joined us to fill the void left with Luna leaving us. Bringing in LB has done that for Bubs and me. Thank you LB.

Wow, that was some rambling on aye?

Oh, one last thing; below are pics of Bubs, Higgie, and Luna and one pic that is the epitomy of Luna; ALWAYS happy and LOVED water. 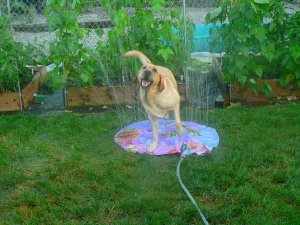 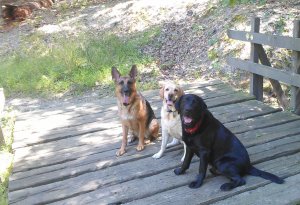