So, I have a report and a question. I have a Flemish Giant rabbit named "Franklin".

I have had him for almost a year now and I believe he is about 1.4 years old. He was litterbox trained in about 3 months and uses his litterbox about 95% of the time which has been great. At first, I kept him in a XL dog kennel with an extended play pen attached to the kennel because I was in an apartment. Now I am in a home and I had a spare bedroom so I gave Franklin his own room. 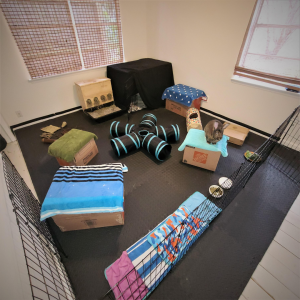 Throughout the last year, Franklin has been a loner. He spends more time by himself than he does with me. Even in his small cage, the cage door was almost always left open and he could come and go as he wanted. Now that he has his own room, unless it is at night when I am sleeping, the door to the room is always open. Still, it seems he prefers to stay in his room. I assume it is like a teenager who would rather not hang out with their parents and prefer their room. Still, I feel bad for him, I go into this room all the time and give him pets which he loves but when he doesn't want them any longer, he just gets up and moves. If I stop giving him pets, and he still wants to be pet, he can get pretty aggressive - meaning he will try and bite to get your attention. I don't mean nibble, I mean bite. In fact, I felt so bad about him being alone, I decided he needed a friend. I found an adoption facility near where I live and they also offered bonding services. They would help you find several rabbits at their facility and over the course of a week, would start the bonding process narrowing it down to the rabbit I would bring home as Franklin's new friend. So, I went to their facility and we selected the top option. I then left and they said they would give me a daily update throughout the week. I didn't hear anything the first night but the second night I received a phone call to come get my rabbit. They said they could not work with him because he is too aggressive. Apparently every time they would stop petting Franklin and start petting the other rabbit, Franklin would charge the handler and bite her. When I went to pick up Franklin, the handler showed me where he had bitten her, yeah, these were not nibbles, they were BITES.

So, Franklin is back at my home in his big room just hanging out. I still go in all the time and pet him and every so often he will come to my office or living room for pets.

Should I be concerned about his behavior or apparently loneliness or am I just humanism him too much and he if fine. I don't like aggressive behavior when you stop petting him and I would love for him to come into a room and just want to hang out but I am not sure that is possible. He may just be being how he is and I have to live with it. He is sweet in his own way but it is his way or the highway it appears.

I would keep trying to get him a friend

although it may take some time for him to stop biting, getting him a friend will benefit him in the end. Good luck and keep us updated!

The problem is, I don't want to go get another rabbit only to have it not work out. That was what was nice about the adoption agency, they would keep trying different rabbits until they found a match. Now, they will not work with Franklin so I can't use them.

Is there another rescue you could use? Maybe if there is you could have more luck. And if the rescue you are going to now let’s you, maybe you could go with Franklin to the rescue and attempt to bond Franklin and another bunny. Franklin might be more comfortable. I just don’t know if you’re rescue would let u though... I hope it works out

He may like being alone or it may be he's just become used to it. It also could be that he sees the rest of the house as your territory and so is reluctant to encroach on your space.

So it's probably either going to be just let him have his space and not worry about it, spend more time in his room with him, try and bring him out into your space to spend time with you, or permanently move him into your main living space so he can get used to being around you more and hopefully gain a closer bond with you. If the last one is doable, that's the option that I would go for and what I think could work best on improving the bond with him.

JBun said:
He may like being alone or it may be he's just become used to it. It also could be that he sees the rest of the house as your territory and so is reluctant to encroach on your space.

So it's probably either going to be just let him have his space and not worry about it, spend more time in his room with him, try and bring him out into your space to spend time with you or permanently move him into your main living space so he can get used to being around you more and hopefully gain a closer bond with you. If the last one is doable, that's the option that I would go for and what I think could work best on improving the bond with him.
Click to expand...

Thanks for the advice. I do bring him out often. He stays as long as he wants to get pets but then hops back to his room. Rarely does he just hang out and sleep or whatever without needing to be pet, otherwise, he goes back to his room. He comes out but just not much. I don't think it is my territory/ his territory thing because when he does come out, he will claim things so to speak.

thank you though...
D

I see you have very nice flooring in his pen. What is the floor like outside of the pen? I would try covering any hard, slippery floor with non-slip flooring and put a few hiding places with at least 2 exits. Maybe also a hay container.

my entire house is hardwood which he does hate. That is why I have covered his area with flooring. I have also used that same type of flooring right outside of his room which leads to my office and to the living room. That way, he has no problem coming to either location when he wants to. In the back of his room, there is an XL dog kennel which I have covered with a black sheet. It only has one entry/ exit but he does go in there but not very often. There is also a hay box right next to the kennel right by his litterbox. He spends a lot of time sitting in his litterbox eating hay. I have tried putting hay in other locations as well but he associates going to the bathroom with eating hay and he is doing a really great job with his litterbox so I don't want to confuse him.