My bun has been on EC meds for a week now and today her legs seem to have gotten worse, it's the worst I've seen it. Could it be because of the EC meds or that it's colder today?
its only 1-3 degrees colder than yesterday at 8-17°C/46-62.6°F but raining all day which makes it feel colder. She is kept indoors.

She's dragging her legs everytime she walks and is struggling to hop in both her litter trays, usually gets in fine. I've cut it down to make it easier for her.
She only used to drag her legs sometimes but she's been doing it all night.

We're not sure if she has EC but was suggested to give it to her anyway, she's had weak legs since I've got her (5 weeks now) she's 3 years old.
Yesterday I got new oat hay from petshop and have mixed it with her old hay that was given by the orphanage. I also introduced her to new pellets (Burgess Excel Rabbit Nuggets mint), gave her about 10 nuggets, which isn't much.. could this be the cause will it?

Vet is closed but I will call them tomorrow.

her left leg keeps sticking out like this when she sits still D:.. and she pretty much mainly using her front legs to walk today. 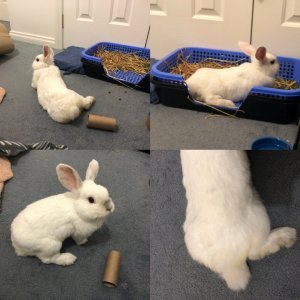 The weather tends to affect how Theo is feeling, maybe it is that way with her. You are feeding her Oat hay and what other type? It looks very brown in that picture. Can you send a picture of the ingredients in both types of pellets?

I think you should take her off the new stuff and see if that's it. But like Mariam+Theo as I it could be weather. Good luck though!
P

Mariam!
that was the old hay (provided by orphanage) that was leftover and peed on, I topped up her hay again. There is also fresh grass on the side but she's eaten most of it. 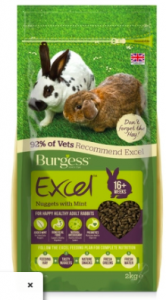 Her diet looks good, so I don't think it is causing her to feel bad. I haven't dealt with EC before so I don't have any experience. I found this: Medirabbit. What medication are you using?
@JBun, what do you think?
P

I havent had to deal with that either. But @JBun does know alot about food and stuff like that!

Panacur is a Fenbendazole.
Medirabbit says: Medirabbit
"Fenbendazole was studied for its preventive and curing properties in rabbits affected by E. cuniculi and the results have been reported in a scientific journal (Veterinary Record, 2001, pp.478-480). This was a major breakthrough, both because there was scientific data to support the findings and because this was the first treatment that was believed to cure (rather than simply control) the condition. It was furthermore shown that fenbendazole alone crosses the blood-brain barrier in mice. In rare cases, long-term intake of fenbendazole has been associated with the onset of bone marrow failure, digestive problems and anorexia, though this was not clinically investigated. After discussion with vets who treated hundreds of rabbits with fenbendazole, none observed the onset of bone marrow failure in the treated rabbits, given the correct doses during 28 days. "

Thats what i was just looking at too! I would see If you can try to take her off the meds, that might help but you have to go super slow.
P

We're not sure if it is EC but orphanage owner suggested to put her on Panacur anyway, might as well get rid of it if she does have the parasite.
As she was still jumping about and stomping up a storm in my house, orphanage thought she could have been born with a neurological disease but unfortunately we don't know her history.

Wow, that was get nice of you to take her in! She might just have weak bones and thays that... I highly unlikely but that would ne the best case...
P

She is such a good bunny (now that her hormones have calmed down lol). Don't know why her previous owner dumped her at the vet.
She doesn't chew any houseplants, furniture, an NIC grid is enough to block her from going anywhere I don't want her to, she won't try to jump over it even though she can and she's so affectionate

I'll try to keep her in my room for warmth if that's what is making her legs weaker until I get sleepy, unfortunately she can't sleep with me coz she eats my hair and I'm not sure if she's gotten out of that habit yet, and not willing to risk it.
I don't think it's that cold in her room though, but I do have heater on now and then in mine.

She sounds so sweet! Theo will jump over everything! I have a table in our shed and the legs look like little horse jumps. He will run and jump over all of them. I need to get a picture. He is a little acrobat bunny.
D

Ask the vet about adding meloxicam and keep giving the Panacur for at least 4 weeks. Did he have a blood test for EC? x-ray? Hope she gets better soon.
P

@Diane R, yes she had full exam, blood test and all 2 days after I got her.
Vet said they will get back to me and no need to take her in unless she stops eating.
And yes, she seems better today, she's taking me on an emotional roller-coaster the past month with all these scares lol..
I started giving her Oxbow Joint Support today, so hopefully it helps somewhat.
D

poopandpee said:
@Diane R, yes she had full exam, blood test and all 2 days after I got her.
Vet said they will get back to me and no need to take her in unless she stops eating.
And yes, she seems better today, she's taking me on an emotional roller-coaster the past month with all these scares lol..
I started giving her Oxbow Joint Support today, so hopefully it helps somewhat.
Click to expand...

Was it a special EC blood test? did you get IgG and IgM titres? It may not be EC at all. I think I would want at least an x-ray. I really feel for you. I know from personal experience how tough this is.
P

I'm not sure what blood test was done, the whole point of the full body check up was to get to the bottom of her weak legs, so I'd like to think that's what it was for

Diane R said:
did you get IgG and IgM titres?
Click to expand...

?? not sure what any of that means haha
D

poopandpee said:
I'm not sure what blood test was done, the whole point of the full body check up was to get to the bottom of her weak legs, so I'd like to think that's what it was for

?? not sure what any of that means haha
Click to expand...

Did the vet confirm that she has EC or show you test results? Really hope she gets better soon. It's heart breaking seeing them like that.
P