Is this rabbit diarrhea?

So I just got two new rabbits. They are both 3 years old. One has had bad poops. She had some yesterday and some today around the same time. I’m wondering what I should do about it? She’s also been normal pooping and is acting normal. Still eating drinking and running around. She didn’t get much exercise at her old owners and she gets a lot here. I’m also introducing her to hay. Could it have something to do with either of those? 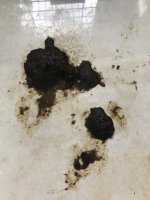 That does not look healthy at all. Her gut biome must be in real havoc, probably from the bad diet she may have had before (I assume since you're the one introducing her to hay, at 3 years old). Diet is strongly related to the maintenance of the stomach's health and the subsequent poop that comes out.

What was her diet before, what is her diet now, and what new things, aside from hay, have you been potentially introducing her too?

I would recommend a vet visit, even if this concern didn't arise. Since they are new, it'd be really beneficial for you and them, long-term, to get a baseline of their health from a rabbit-experienced vet.

Ok I know of a rabbit vet I could talk to. All she ever ate before were pellets. I haven’t introduced anything new except for hay yet. I plan to introduce veggies but I thought I’d do hay first and take it one step at a time. Also there were some cecotropes on the wire of her cage. Could she have just squished that area in when she was sitting on it? Thanks so much.

My vet can’t see me until Saturday and there is now one else around who sees rabbits. Is this super urgent? Is there anything I can do until then?

There's nothing in the photo that gives relative size, so it's difficult for me to imagine it as a smeared cecotrope. Honestly, it looks like the size of a dog poop, haha, but I know it's not, so I'm forcing myself to assess just based on the visible color and texture.

The hay addition is really good and is really going to help get healthy bacteria into and consistent within their stomachs. When you go to the rabbit vet, I recommend having them look at their teeth -- one of the important functions of hay is that it is actually sandpaper for rabbit teeth. Rabbit teeth never stop growing (like human finger nails), and hay/grass is actually textured in small blades, not smooth to the touch. To eat hay/grass, rabbits really chew the heck out of it, and that keeps their teeth from growing out in painful ways in their mouth. In a baffle of evolution, rabbit back teeth can grow spikes inwards, towards their tongue, and also outwards, towards their inner cheeks. Not having hay for that long makes me wonder if their teeth are ok.

..... I think really trying to keep both your rabbits hydrated and get them to eat as much hay as possible is a really good step until Saturday. There's a chance they won't eat a lot because 1) hay isn't as good as pellets for most rabbits, taste-wise and/or 2) it may be uncomfortable to eat it if they have dental problems already. Don't introduce any veggies or new foods - your instinct on that was really good. Different bacteria are needed in the gut to break down different foods, so it's important to get your rabbits' stomachs more settled with hay first. Again, the poop seems to be a good signal that there is an upset tummy in the mix. Hay gives lots of fiber, and that will hopefully get the poop to become more solid. Since it's so loose and wet, they may be losing a lot of water, so hydration is important.

If they allow you to get close, can you listen to their stomachs (just smoosh your ear against their side)? If you hear lots of gurgling (like if you had an upset stomach and felt gas moving around), you can buy simethicone, aka infant gas drops at a local pharmacy or something. It is safe to give plain baby gas drops to rabbits (they can't overdose on it), and it helps move gas through the system so it's more comfortable for them. This is usually more helpful for episodes of gas, rather than treating a chronic stomach imbalance, but if your rabbits are going through a gas episode now as a result, this can provide some relief. Simethicone usually comes in a bottle with a dropper. I usually just give a full dropper, and the rule of thumb is one dropper for 3 hours, and if you don't see improvement, it probably won't help with future doses.

If possible, I would talk to the vet you spoke to and ask for his/her recommendations as well. If she/he has an e-mail, maybe send the picture and ask about their recommendations, as of now.

Ok thanks so much. It’s a lot smaller than dog poop. It’s more like the circleish area at the top is the size of a quarter. Sorry for the confusion.

If you find out what kind of pellets they were given, that'd be informative too. There are rabbits who for various reasons don't eat hay, and they do have healthy stomachs, so the content of the pellets is important to consider. I largely assumed they weren't given quality pellets because you're getting poop that looks like this, but I could be wrong, so getting that data would be informative.

I know that they were given purina complete rabbit chow.

I just talked to my vet. They said that it’s probably just the pellets and all I have to do is slowly lower the pellets and up the hay and that it’s no big deal. I’m so happy I got a hold of her I feel so much better. Thanks so much for all of your help to.
You must log in or register to reply here.
Share:
Facebook Twitter Reddit Pinterest Tumblr WhatsApp Email Share Link