I've had Grey (Male//Lionhead) for about 6 months and I just adopted Millie (Female//Dutch) about 2 weeks ago. Is it bad that I have my cages set up so they can see and smell each other? I have to keep them separated for a while until Grey gets neutered at the beginning of next month, but I want them to still get acquainted. So far neither of them has shown any sign of aggression, but I'm worried it will stress them out, can someone help me? 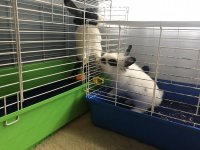 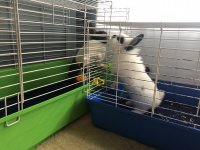 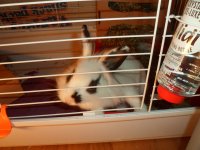 Hi, my Leo is 4 moths old and he looks a bit like your Grey
I had the same situation he was so very friendly through the bars but when I let them play together he just tried to mate her every minute so I had to completely separate them and they can't see or smell each other, I've decided I will keep them separated until Leo at least will be neutered, I have no idea how I will survive a couple more months!

Personally I would move the cages a bit apart... at least an inch or two. When the cages are right next to each and they can reach through the bars they can chew the fur off their neighbor's face

Having the cages next to each other shouldn't be a problem as long as they seem interested in each other and aren't showing signs of aggression. It actually can be a good thing because they can get to know one another and it can also be comforting to them to have another bun there when they seem to like one another. But like sablesteel mentioned a small gap is usually good, especially to prevent the male from trying to mate with her through the bars(which can and does happen).

I would just keep an eye on his eating to make sure it's not distracting him too much to have a female near him. He needs to continue to eat his food well. You may also encounter problems with him wanting to spray urine on her(and you), which is usual hormonal male behavior, though certainly unfortunate and disgusting.
C

I did the same with my two bunnies and had no problem, though I would have it slightly separate from each other though so they can't touch (just in case of attempted biting through the bar - had that happen to my guinea pigs).
You must log in or register to reply here.
Share:
Facebook Twitter Reddit Pinterest Tumblr WhatsApp Email Link