My bonded girls, Gigi and Kiki got into a tussle last week and Gigi was left with a bite, which didn’t look too bad initially, but became very sore and I took her to the vet the following day. She has now completed a course of Baytril.

They are getting on again and the wound has been healing nicely, but it looks as though the scab has come off a little early. Kiki has been trying to groom the area and I stop her whenever I see it happening but can’t be around all the time. You can see her little nose trying to get to it in pic 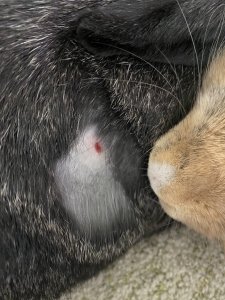 It is quite a small scab now and I have been putting diluted betadine on it, but is there a risk of it becoming infected from Kiki’s grooming? I can’t really think of a way to stop her from getting to it, other than by separating them, which would make them miserable.

At this stage of healing I would see it as pretty unlikely. It would be most at risk of bacteria being introduced when the wound is fresh, particularly when it hasn't started to form a scab.