Look at these two. LOOK! OMG! They are the most adorable pair I have ever met.
Funny story, though. My husband woke up one morning, hearing the two zooming around. He thought they were chasing each other, but he described was just them taking turns to Zoomy around. They both go out into the hall, one races back in, then the other, then the first one races back out, then the other after the first stops. But not actual chasing. Then they go to their little cubby shelf and sleep until I get up to get them breakfast.
Now, this happens while I'm work and can't move my chair. 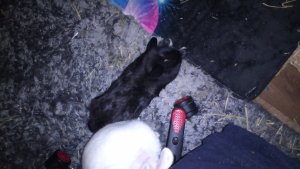 Is Shen the mattress or is Xiao Wu the blanket? I turned an unused storage tub into a hay box. They love it, a lot, but not as a hay box. 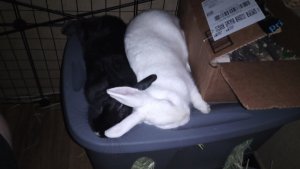 SirLawrence said:
OH MY GOD THOSE TWO!!!! I LOVE THEM SO MUCH!!!

ADORABLE is the only word that can describe that!!

ArtistChibi said:
Is Shen the mattress or is Xiao Wu the blanket? 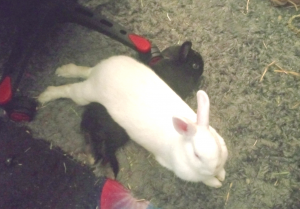 This is Xiao Wu saying to Shen 'You are MINE, You are my Squishy'

So much about keeping rabbits in pairs

This couple is absolutely adorable

. Thank you for sharing and let me smile all day !!

. Thank you for sharing and let me smile all day !!
Click to expand...

It is my pleasure to make others smile.