How can I win over my bunny

Hi,
So I adopted a lionhead male rabbit in July. I don't know anything about his history. He is 2-4 years old and was found at a park in a box. At the shelter he was so friendly and let me pet him during our play session. He was not scared at all. Like a week later I was able to take him home with me after his neutering. He seemed a little scared but got warmed up. I didn't let him out of his cage for a couple of days because the people at the shelter told me not to bother him. He became a free roamer in my room. Later the whole apartment. I was laying on the floor every day for hours but he was not interested in me at all. He is still not. Even if we are in a tiny space he would not come up to me. He is terrified of people. We can barely touch him. The only way is when he is a corner and can't get away. But I can tell he is so scared. His ears are back and his eyes are wide open when we pet him. When he sees me he runs away. I used to be able to walk by him but a month ago he started to molt so badly so I had to pick him up and brush him for a couple of days. This was a traumatic experience for him and since then he is even more scared of me. He hides from me, I can't get close to him. I don't really know what to do. He accepts some pellets from my hands in the mornings but tries to run away with any other food. I have to hold his veggies so tight so he could eat from my hand. But even when I just put his veggies in the bowl he runs away with them like he has to fight for his food with someone else. The other thing is that he has a cage as a base. That is his safe place. He is supposed to be a free roamer but he barely leaves the cage. The door is wide open. And when he does he just lays next to the cage or hides behind something. His cage is in the living but he never left it. And I am talking about a tiny New York city apartment. He could jump around, explore, exercise. But he chooses lay around in the cage or pretty close to the cage doing nothing. He doesn't play. I made him toys but never showed any interest. It has been 4 months and I don't see any progress with him. We stepped one backwards after the brushing incident. I don't know what I should do. I see these cute pictures, videos of bunnies and their owners and our relationship is miserable. He avoids me every time and I just feel like his servant really who feeds him and cleans after him. I just want to pet him once in a while. I am okay with not picking him up. I only did it couple of times when it was needed. But it would be nice to get him trust me. Any suggestions or success stories with skittish rabbits?
Thank you guys

Myself have a skittish bunny. His name is Toste.

He was so stressed and scared, he would attack people and trying to hide. He’s the cuddles bunnies I own now, he’s docile and love cuddles. I only need to win his heart a bit more and I will get kisses.

Myself let him live outside to let him get a space as his own. He was extremely scared of humans more than yours. Because I didn’t have space to have two indoor cages and he needed a space that was only his with no people around him walking around all day. He often got so scared he ran into walls with the head first and got stuck or extremely confused, just seeing a human waking nearby.

But I started with always having pellets in my pockets and every time he came up to me he got a pellets. Later he would always run up to me to get treats.

Then I started to train him with petting and being touched. He often backed away when it got too much and sometimes I pushed too hard so he regressed and became guarded again.

But make it a habit to only hand feed pellets, give just one pellets and the often he come up give one more. Using treats to reinforce and build a bond make it a lot easier.

But try to make the space smaller instead of free roaming and slowly expand the area. Just to create a safe space bigger than the cage area. He need to build up safety, trust and confidence. It can take time, took me a year to get where I am with Toste. 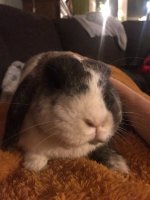 It seems to me that you have tried pretty much everything.
If i were in your situation with a skittish rabbit, i'd get him a buddy, but at the mention of a tiny NY apartment i'm not sure it would work for you.
Have you tried spamming your household with hidey-holes? Maybe if he's so scared of everything, having a bunch of hideholes to run off to might be a positive experience for him.
But honestly, someone else is definetly mkre experienced than i am, seeing as i share a strong bond with my bun, who was sociable from the get- go.
If hideyhole-spamming doesn't help, then maybe just let him be? He needs his own private space, but he WILL have to get used to you eventually. Might just take a crazy amount of time since he is of unknown origins.
Don't sweat about it so much- if you're less worried, there's a chance that he'll opt to be less nervous as the result.

Myself would never recommend to leave a rabbit be. It will only worse the situation and never grow a better bond if you avoid the problem.

Myself have always had the motto to face the problems instead, having tiny goals for myself and bunnies.

Toste goals in the beginning was not biting and attacking me every time he saw me.

His goals now are that kids can interact with him. So never give up on your bunny [emoji5]

Even thought you will somtimes feel frustrated, want to give up and just let someone else take the bunny. I often hesitated and doubted myself if I was a good bunny owner. But I kept on working with my bunny, when we regressed and went back a few steps I truly just wanted to cry and give up. You will face all those situations but it will only build up your bond.

But I can promise you, you will feel fulfilled after you manage to build a bond and see how much your bunny have developed to a confident individual. The growth will be tiny in the beginning but setting goals will make it easier too see those small changes instead of trying to see huge changes. Which take a lot longer to notice [emoji5]
V

Thank you guys! I was thinking about getting him a friend. But I am not sure if he would want it. He tries to interact with our two cats but they're not his own kind so they don't really know how to play with him. I should definitely get him an xpen because free roaming is not his thing yet.

I am watching this thread because my little bun is not too keen on me either he runs up takes food runs off... if you find a trick that works well for your little guy please share and I will do the same if you like. X
V

A little update. I think I managed to achieve some progress with him. It took him a long time to settle in but finally something is changing. So he lets me to touch him and pet him now, doesn't run away and hide in his box like before. He comes out from his cage regularly and hangs out by the table. It's like one meter away from his cage but it's something!! He looks more relaxed and happy. I think he just needs way more time to feel safe and to explore. I guess he was kept in a cage all day so he is getting used to everything. I did not get him a friend but I got him two stuffed animals and he loves to groom and play with them. Honestly my tactic was just to ignore him and I guess it worked. He realized I don't want to touch or hurt him. And probably he realized I am the person with the food. I am the one who gives him his favorite veggies, apples etc. So he associates me with food and good things. There is a long way to go still but I am so happy that after 6 months he is finally starting to feel safe.

That's great to hear! I wish you all the best with bonding with your bun. With my rabbit, Trixie, I'm still teaching her that it's okay to be picked up. She's slowly coming around and not wanting to hop out of my arms whenever my hand goes underneath her. At first she was always hopping out, even grunted at me one point. But now, I carry a small hand of pellets as her reward for letting me hold her for a minute or so. I feed her a few before picking her up, and adda few pets and there to show her that I won't hurt her. Then when I put her back down, I also give her another pellet while putting her down to show her that everything is okay. She's getting it, and hopefully within the next month or so, I'll be able to pick her up with ease.