So my two little kits are 9 weeks old now.
Both of them are male bunnies. They stay and play together with their mother well and fine but I was wondering is it time to separate them, like can mature kits breed with the mother bunny?
Can I keep them together forever or should they be kept apart? 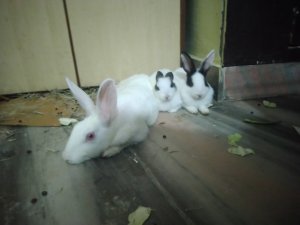 Yes they can breed with their mom, though usually they aren't mature enough to until a few more weeks, but some bunnies do mature sooner than others.

Usually by 10 weeks old it's best to separate males from each other, though if they aren't showing signs of mounting yet, I have let my male babies have supervised play with each other until they were 12 weeks old. Though once those hormones start coming in, males can and usually do start fighting, and this can lead to serious injuries or even death. If they are showing any signs of hormones or aggression, best not to take a chance and just keep separate.

I normally make sure bucks are separated from their mother by 9-10 weeks of age. The doe maybe eager to breed, and will start mounting them. It is very unlikely they can get her pregnant until they are around 3 months of age. If you see any mounting (from any of them), separate immediately. As JBun mentioned, hormones can make them aggressive and it may be best to separate to avoid fighting and injury. The boys can be kept together until around 4 months of age. Then they should be separated until after neuter.

Are you planning on keeping the babies, or selling them? If selling them, they are ready to go to their new homes and can be weaned as early as 8 weeks old. If keeping them, prepare a new enclosure (preferably close to mom's) to reduce stress. Bring some of their blankets, toys, etc to their new cage to make it feel like home!

If you are planning to keep them together for life, I recommend neutering the boys. If the mom is under 2 years old, it's a possibility to spay her too. If you're planning on ever breeding her again, I do not recommend housing her with other rabbits!

I hope this helps

As of now none of them mount each other. They eat,sleep, play together all day except for few times mother bunny growls on them over food. There isn't any agression among the boys too as of now but sure will keep a check because it's already week 9!

Mother bun is two years old now which kind of makes me worried to get her fixed, and yes I'm planning to keep em all! Love them so much that I can't let them go, have already prepared a separate cage for them to live!