First, the contenders. Becky- 2 yr female spayed 4.5 pound mini lop. Cindi- 4 yr female spayed 6 pound mixed. A month ago Becky went on dates. She picked Cindi over the boys she dated. They are living in my office, bunny proofed and a fence down the middle. They have dated in the bath tubor a laundry basket each evening for two weeks. The last few evenings they have been together for three hours at a time. :biggrin2:

Today I set up a play pen in the kitchen and they have been in there for about three hours. They had two minor scuffles, but nothing significant. They basically just sit on opposite sides and stare at each other. :shock:

I even tried squishing a banana on their heads. They groomed themselves. I'm getting frustrated. How can I help them move on? I really want them living together without the fence by the time we are out for the weekend at the end of the month to make it easier on our pet sitter. I'm starting to think they are not going to make it. :expressionless

I guess I just need some encouragement from someone who has been though this before. This is normal still isn't it? :?

Nine hours in the kitchen playpen. I scrubbed my kitchen to within an inch of it's life today. No snuggling or grooming eachother, just lots of ignoring.

If they are able to coexist in the same area without major fighting then that is good. The rest will come about naturally. I would let them together as much as possible and just let them develop their relationship.

i went through this bonding my netherland dwarf to my mini rex, and now they are in seperable. they would always just ignore each other. and eventually after realising there were no big fights during play time, i put them together in a cage, and thats what made them start grooming and snuggling.

i was VERY nervous the first night alone leaving them in their cage. but there was no fighting!

hhhmmmmm.... perhaps I will try opening the gate today and see what happens. That would be wonderful if they could get along well in the same space, the grooming and snuggling could come later. Thanks for letting me know I don't have crazy buns

keep in mind that u are moving at a great pace with their bonding...you pushing them to the next step could set u back dramatically with them.if they have a really good fight they wont forget it,they hold grudges ..seriously dont push it ..u are so lucky to be as far along as u are now...there is no quick way to bond....have they started eating together yet.? or has anybody been groomed?...has either one put their heads down waiting to be groomed ?..u dont know who is dominant yet do ya?

I'm with Lisa. Ignoring each other is a good thing so you should be very happy with that. They will give you a sgn when and if they are ready for more. I would seriously avoid putting them together in established territory if they haven't actually bonded on neutral territory. I'd suggest keeping it slow and doing what you are doing now. I would also think removing the pressure from yourself and the buns would be better. Even if they are not bonded by the time the petsitter comes, it'll only take her a few minutes more. You'd just need to stress the need for them to not have direct contact I think it's going really well Don't forget that rabbits are very picky about their companions and nothing is ever guaranteed. You are lucky that they even tolerate each other

Well, when I went in to open the fence they were laying on either side back to back, almost touching. It was so cute I didn't want to bother them. Your right, I shouldn't rush. If I can deal with the fence then so can the pet sitter.

I give them their food close to the fence so they are eating close together with no problem. On Saturday when they were in the playpen together neither one ate much, but at least it was not a flash point either.

Flash- nope, don't know who is the boss yet. I think that is the problem. They will go nose to nose, but neither one will lower their head so one gets frustrated and nips at the other one's nose.

They picked eachother out, but Cindi was more submissive at the shelter. I guess she is gaining confidence, which is good, but I hope she decides to let Becky be the boss.

I did get a bit of cuddling in the laundry basket on Friday. I think the tv show we were watching scared them a little. 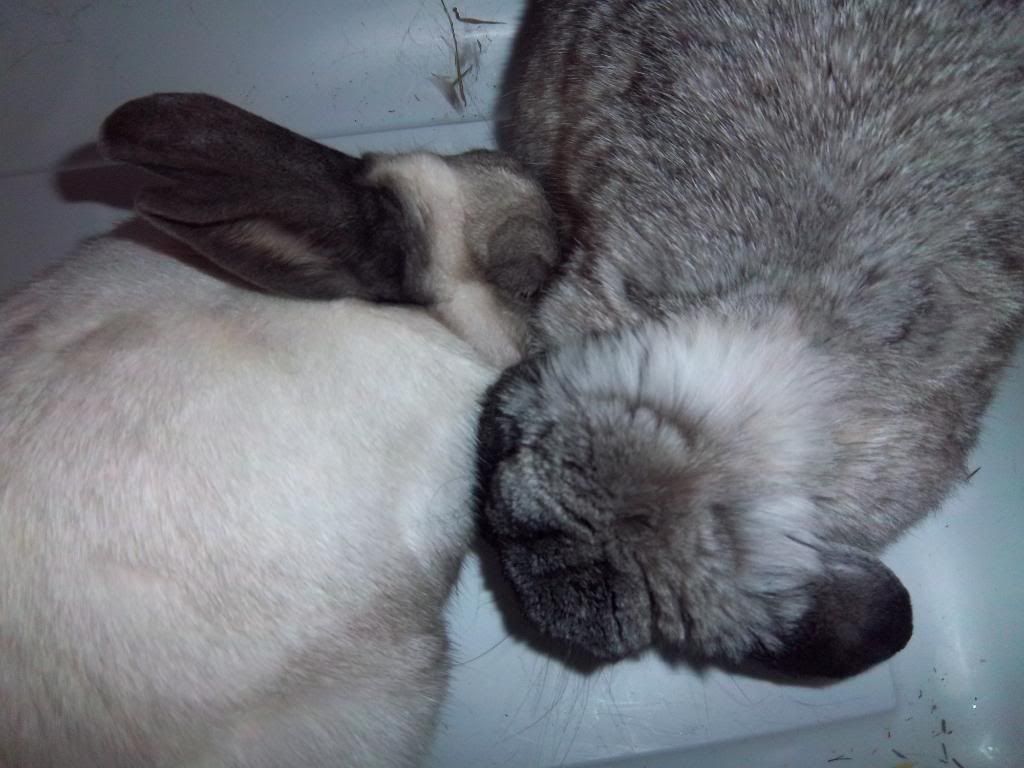