I’ve tried to get My rabbit Hazel pregnant 3 times but never had any luck so gave up in the middle of her last planned pregnancy (she wasn’t pregnant) she got in the bucks pen and I found them together a few hours later but didn’t see any mating signs so thought nothing of it. A while past and I decided I needed to move them both somewhere warmer for winter so I put them in a straw barn out of sight of each other. Hazel has been making a weird screaming sound when she sees or hears the buck so I thought no way she could be pregnant and that was the noise she’d make before mating with him. 5 days after moving them I go to check on them and Hazel had plucked hair and made a little nest in the corner. I look around and find a baby that wasn’t in the nest and she’d eaten it’s ears off and it was dead. Will this be due to the move or could it have been a stillborn and she could possibly have more she’s sitting as far from the nest as possible but I don’t want to stress her by looking in the nest. The weather was also quite bad last night so could that have encouraged her to eat it?

It could be either reason. Though I'd think it was more likely born dead. I would suggest to keep checking on her, maybe every few hours. You just don't want her to give birth to any live kits, and if she doesn't have them in the nest with her fur to keep them warm, they could quickly get chilled and die. If you feel you checking is stressing her, I would distract her while you do it, like with some of her favorite food. 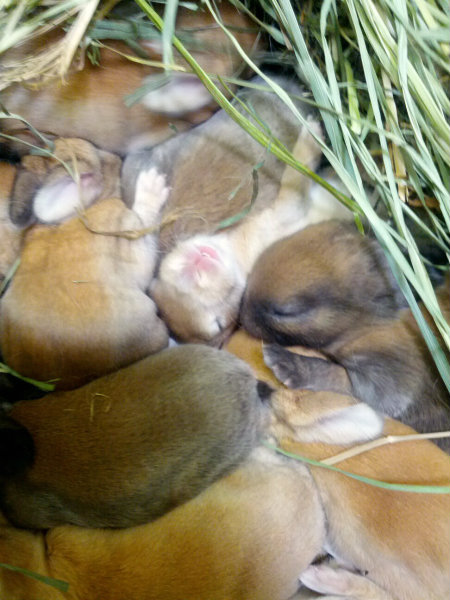